Theresa's Tories Will Be Just Fine 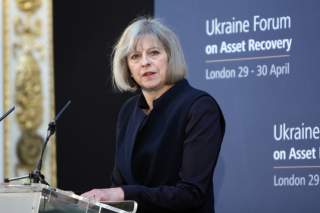 After Brexit, it seemed British politics was lapsing into a cheesy thriller flick—the sort with the late-story plot twist that sees the most unlikely character betray the protagonist. “Ah-ha!” says the spindly, disheveled, calcium-deficient techie who’s been sitting in a van for two-thirds of the movie, as he turns his gun on his former friends. “Bet you didn’t think it was me!” No, we didn’t. It still doesn’t seem plausible, really.

In Brexit: The Aftermath, the unlikely turncoat role was played by Michael Gove, Britain’s justice minister. Gove is wonkish, seemingly earnest, the most courteous man in the House of Commons according to his friends. So the words “Et tu, Gove?” must have dripped off Boris Johnson’s lips with particular surprise. After Britain voted to leave the European Union, Johnson and Gove, both pro-Leave Conservatives, prepared a dynamic duo act whereby Johnson would serve as prime minister and Gove as his chancellor (the Queen’s version of a finance minister). That was until Gove abruptly withdrew his support for Johnson and announced his own ambition to be PM. It was the most visible betrayal to shake the Conservative Party since Geoffrey Howe resigned from Margaret Thatcher’s cabinet in 1990 over—what else?—her opposition to the euro.

If this were a proper thriller, the third act would have been a blazing shootout between the rogue Johnson and the newly resourced Gove. But this is the British Conservative Party, whose tradition of orderly politics makes your average airport boarding line look like a Jacobin mob. Johnson immediately dropped his prime ministerial bid, and Gove’s reputation, like Brutus’s, was sullied beyond repair. He was eliminated in the second round of voting among Conservative MPs, which left two contenders standing: Theresa May and Andrea Leadsom. Britain’s next prime minister would be a woman, the second after Margaret Thatcher. The mahogany of the boys’ club had melted away once again.

On paper, Leadsom seemed the more Iron Lady–esque of the pair: a sunny and eloquent unknown who stoutly backed Brexit. But an economic address that she gave during the leadership contest was denounced as little more than a rack of bumper stickers—“prosperity not austerity”—and likely made many MPs question whether a novice should be spearheading Britain’s most consequential negotiation since the Second World War. Theresa May, though a Remain supporter, is the UK’s longest-serving home secretary in sixty years and an unflappable presence in the House of Commons. It was easier to imagine her staring down eurocrats than Leadsom, and that surely mattered.

At any rate, MPs were never forced to choose, at least not officially. In keeping with her party’s orderly changings of the guard, Leadsom dropped out before the final vote, which she probably would have lost. “Business needs certainty,” she said by way of rationalization, citing that C word that had led Conservatives first to campaign against Brexit and then select a Remainer to manage it. On Wednesday, Cameron bantered through his last Prime Minister’s Questions and submitted his resignation to the Queen. May was in the job hours later. The thriller novel ended without climax—or did it?

There’s still the matter of the new cabinet. May is known to be more meritocratic in her hires than Cameron, who was often accused of stocking positions from his personal clique, but every selection process inevitably creates friction. Her first pick, at least, was a sturdy olive branch to Brexiteers: none other than Boris Johnson as foreign minister. There’s also the question of her ideology. While Cameron touted himself as a “big-society” conservative, his economic policy consisted mainly of tax cutting and deficit reduction. May, on the other hand, has called for a “proper industrial strategy” to leverage government in defense of British industries, curbs on executive pay and worker representatives on corporate boards—all anathema to her Conservative backbenchers. She’s also held in contempt by many civil libertarians over her support for privacy-infringing antiterror laws, including the controversial “Snoopers’ Charter.”

Whatever the case, her early years will be dominated by her role as Britain’s chief usher out of the EU. May has, despite her endorsement of Remain, pledged to initiate Brexit, but she surely knows that once she activates Article 50 of the Lisbon Treaty, she’ll risk jolting Britain with another round of economic pain. The divorce proceedings after that will be even more harrowing. Language written into the charter advantages the EU and constricts the negotiations to two years. That will force her to confront a hefty portfolio of challenges with little time for reflection.

And while May is known for being an eye in the political storm, even she must be haunted by her party’s history. The Tories’ past three prime ministers have now fallen into its chasm over Europe, and even last month’s public verdict won’t suffice as a suspension bridge. Every wrinkle of the exit agreement she strikes will be scrutinized by a party whose spectrum stretches from John Major to John Bull. Much will also hinge on the continental clash between Angela Merkel, who wants to let the UK off relatively easy, and hardline federalists like European Commission president Jean-Claude Juncker, who is in a more vengeful mood.

Whatever happens, it may be the Labour Party that ultimately saves May. Here we can return to the thriller movie theme because, if ever there was a delusional supervillain, it’s Leader of Her Majesty’s Most Loyal Opposition Jeremy Corbyn. He still clings to power even though the coalition calling for him to resign includes a majority of his (now abdicated) cabinet, a majority of his MPs and presumably a majority of life in our solar system. Corbyn is the bearded submarine captain wearing a woolen hat, bellowing at his men to fire the torpedoes even as the water rises above their necks.

Britain in its last general election voted Conservative, wary of Labour’s amateur hour and the radicalism of Scottish nationalists. If Corbyn’s civil war continues, May could find herself with more job security for years to come.

Image: a photo of the new UK prime minister. Flickr.