These are the Benefits of a U.S.-Russia Summit 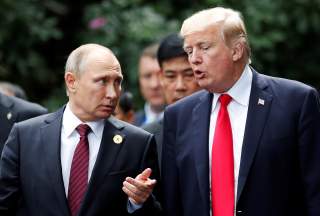 Presidents Trump and Putin appear set to hold a summit meeting in July. This will be their third in-person meeting even though both leaders have made statements about how they have a positive working relationship and that they have spoken often by phone.

The U.S. domestic political climate on Russia is especially fraught at present. The White House is at odds with the Justice Department “Russia investigation” team led by Special Counsel Robert Mueller, who has reportedly sought to question President Trump. At the same time, momentum is building ahead of November’s midterm elections, with leaders from both parties warning about the risks of further “Russian meddling.”

In Russia there is widespread skepticism about any Trump-Putin meeting. Pundits and opinion-makers raise doubts about whether Trump can deliver on any significant matters important to Moscow. The predominant mood is that the U.S. president remains a hostage to the unanimously anti-Russian Washington establishment and that any agreement with him can be overruled by the U.S. Congress or even by his own administration.

Yet what should be in the forefront of the minds of both presidents is the dangerous state of U.S.-Russia relations, and its consequences for the interests of both countries and for global security.

Since the end of the Cold War, and perhaps even since the early 1980s, Moscow and Washington have never been closer to direct military confrontation, a consequence of increasing deployments, exercises, and operations by air, sea, and ground forces from the Baltic region to the Middle East. In some cases, Russian and NATO forces have nearly come into hostile contact, and escalation has been avoided by only the narrowest of margins.

Both Russia and the United States are set to invest billions in modernizing their nuclear arsenals, which, although positive from a safety and reliability standpoint, create the impression of a new “arms race,” as the presidents acknowledged in a March phone call. An especially worrying new dimension to the nuclear risk is the possibility that cyber attacks by states or non-state actors could lead either party to raise its nuclear alert level, thus triggering a matching response from the other side, and possibly touching off a dangerous escalatory cycle.

The forthcoming Trump-Putin meeting cannot resolve fundamental problems between Washington and Moscow. Neither leader would or should make unilateral concessions on matters he views as critical to his country’s national security. However, the meeting might open a path toward stabilizing the relationship, which under the circumstances, would be an important accomplishment in itself.

A simple but vital step toward such de-escalation could be for the two presidents to reiterate the joint view of Presidents Reagan and Gorbachev from their 1986 Reykjavik summit, that “a nuclear war cannot be won, and so should never be fought.” In fact, thirty-two years ago the U.S. and Soviet leaders discussed the possibility of eliminating nuclear weapons altogether, a goal which then Presidents Obama and Medvedev confirmed and supported in 2009.

Yet with the 1987 Treaty on Intermediate Nuclear Forces practically defunct thanks to reciprocal alleged violations, and the New START treaty limiting overall strategic nuclear arsenals under stress, an optimistic long-term goal like nuclear zero is hardly on the agenda for Moscow or Washington. Instead, both must now confront the urgent negative consequences of stalled U.S.-Russian bilateral arms control for global nuclear nonproliferation.

This is especially true after the U.S. withdrawal from the Joint Comprehensive Plan of Action on Iran’s nuclear program, and given the real chance that Iran is determined to develop a weapon, which would trigger cascading nuclear breakouts across the Middle East. If the upcoming 2020 Review Conference of the Nuclear Nonproliferation Treaty is to be anything but a last gasp for the half-century old nonproliferation regime, Presidents Trump and Putin will have to offer some hope that Washington and Moscow take their own responsibilities to reduce and disarm under the treaty seriously.

The wars in Syria and Ukraine have cost hundreds of thousands of lives, and displaced millions of people across the Middle East, Europe and beyond. Washington and Moscow each control resources and levers of influence vital for managing and ultimately resolving these conflicts. Although officials have sought to negotiate small steps, such as implementation of the Minsk agreements in Ukraine and getting the Syria talks in Geneva back on track, political will is lacking, and a meeting between the U.S. and Russian presidents is by far the best opportunity for each to signal their commitment to progress.

Finally, in the aftermath of years of sanctions and counter-sanctions, policies of mutual isolation have atrophied relations between ordinary Americans and Russians to an unacceptable degree that does not serve the interests of either side. Basic embassy and consular services have been severely constrained by expulsions of diplomats on both sides, and by the closure of U.S. and Russian diplomatic facilities.

As a result, tourism, trade, scientific, cultural and educational exchanges are all plummeting for the first sustained period in the fifty years since the General Agreement on Exchanges was signed at the height of the Cold War in 1958. Even while sanctions remain in place, the two presidents should clearly signal that contacts between diplomats, legislators, businesses, scholars and civic groups are foundational to peaceful, productive relations, and thus are especially important when official ties are strained.

Despite a deep crisis in the state-to-state relationship, Americans and Russians are still interested in each other, and they largely reject the current paradigm of battling official narratives. Russians still line up at the U.S. Embassy in Moscow, eager for U.S. visas, and Americans constituted the largest cohort of foreigners visiting Russia for the World Cup this month. It is simply unfair and shortsighted to make ordinary citizens pay the price for conflict between their governments.

Disagreements between Moscow and Washington are extensive, and the two presidents will not find common ground on many issues. The point of meeting is not for them to overlook these differences or to strike a grand bargain. Rather, it should be to send a clear message and create the space necessary for the two governments to restart a cooperative engagement that is in the clear interest of both sides.

The history of relations between the United States and Russia demonstrates that there is no substitute for personal contacts between the leaders of the two countries. This was the case with Richard Nixon and Leonid Brezhnev, Ronald Reagan and Mikhail Gorbachev, Bill Clinton and Boris Yeltsin. These historical examples are especially important now, when official contacts at lower levels are hampered.

The current conflict is not a new Cold War, nor will it become one. But attention should be paid to the vital lesson from that conflict, which is that summit diplomacy is not just for celebrating big victories—it is for giving momentum to the small steps and everyday interactions that kept that war from turning hot.

Andrey Kortunov is director general of the Russian International Affairs Council and Matthew Rojansky is director of the Kennan Institute at the Wilson Center.