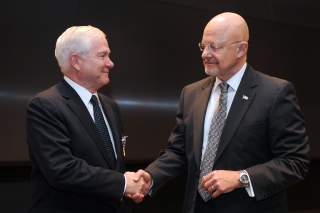 In extended interviews, two former U.S. intelligence chiefs have provided dramatically different assessments of Russia’s interference in the 2016 presidential election and its aftermath. Comparing their statements raises some important questions about the media controversies swirling about the Trump administration, including President Donald Trump’s firing of National Security Advisor Michael Flynn and, more recently, his dismissal of FBI director James Comey. Doing so likewise demonstrates how America’s media and political environments have distorted both the investigations into what happened and wider U.S. policy debates.

Speaking to CNN’s Jake Tapper, retired Lt. Gen. James Clapper, who served as director of National Intelligence in the Obama administration, declared that America’s institutions are “under assault”—externally by Moscow, and internally by Trump, whom he accused of attacking “checks and balances” established by the nation’s founders. Clapper also sought to distance himself from earlier statements that he was unaware of any evidence of collusion between the Trump campaign and Russian officials, bizarrely asserting that he was unaware of the FBI’s counterintelligence investigation until Comey disclosed it in March 2017 because, while he was in office, he “deferred” to the FBI director regarding “whether, when and what” to tell him about such probes.

Clapper’s startling remarks are important for three reasons. First, the former intelligence official doesn’t seem to have a very precise understanding of the “checks and balances” established in the Constitution, which use executive, legislative and judicial branches against one another to ensure that none of them can amass excessive power. Firing an executive branch official can’t “assault” checks and balances because it is clearly within the president’s authority. Almost every other observer has acknowledged this.

Second—and this is what Clapper’s comment about Trump’s “assault” on America’s institutions means—Obama’s former top intelligence leader is manifestly opposed to Trump. Clapper’s effort to run from his previous statement that there was no evidence of collusion—which, in a society organized around the presumption of innocence, should carry some weight—looks intensely political. Anyone assessing his public statements without acknowledging this is not playing straight with the facts. This raises broader questions about the Obama administration’s whole approach to intelligence assessments and investigations surrounding Russia’s election interference.

Finally, how is it that Clapper could not have known about a counterintelligence investigation into collusion between a presidential campaign and a foreign government? It strains credulity that the nation’s top intelligence official could be unaware of an investigation into something that Clapper himself described as an “assault” on America. Even if one takes Clapper at his word, however, how could he not have suspected that such an investigation was underway? When did he learn about the “dossier” alleging collusion? Reports emerged in mid-January, before Trump’s inauguration, that Clapper briefed President Barack Obama and Vice President Joe Biden about the “dossier.” Did Clapper think that the FBI wouldn’t investigate the charges? Would Comey have needed to tell Clapper that the FBI would investigate them? Clapper’s attempt to pretend that he didn’t know about the investigation looks disingenuous. Perhaps someone in America’s media establishment, which is quite keen in pursuing inconsistencies in Trump administration statements, should build a timeline for what Clapper knew, when he knew it, and what he told Congress and the American people at each point.

Former secretary of defense and CIA director Robert Gates took a very different approach on the CBS program Face the Nation. Gates—whom no one could accuse of sympathy for Moscow—put Russia’s election interference into historical context, expressed considerable skepticism that Russian officials could have blackmailed Flynn, and, while describing Comey’s firing as “not terribly well done,” was subtly critical of the former FBI director and his conduct.

Gates argued that Russian president Vladimir Putin “saw the U.S. basically come out against him in his reelection campaign in 2012” and as “behind” revolutions in Ukraine, Georgia and other countries in Russia’s neighborhood. Gates characterized Putin as responding in a “very KGB” manner—likely an implicit reference to covert action—to his own perceptions of U.S. conduct (which Gates did not endorse or dismiss). Putin’s strategic aim, Gates said, is to undermine the appearance of legitimacy in U.S. and Western elections so that Western criticism of Russia’s elections would carry less weight. Unlike Clapper, Gates provided a pragmatic and unemotional assessment of what Russia is doing and why. His matter-of-fact comment suggests that America’s noble intentions in promoting democracy in Russia won’t protect the country from blowback from Moscow, and should encourage reflection.

Regarding Michael Flynn, Gates stated that he considered it “kind of a stretch” to argue that Russia could have blackmailed the former National Security Advisor over his inaccurate assurances to Vice President Mike Pence regarding his conversations with Russian ambassador Sergey Kislyak. Gates explained that sharing secrets or personal misconduct could create such vulnerability, but that the idea that someone “didn’t tell the truth to somebody in the same building where they work” likely would not. Gates said that if he had discovered something like that, he would request a private meeting with the president to share it. But he undercut former acting attorney general Sally Yates’s contention that Moscow could have blackmailed Flynn.

Perhaps most importantly, Gates implicitly supported Trump’s firing of Comey while criticizing its execution. When host John Dickerson asked Gates about Trump’s reported request for Comey’s loyalty, Gates responded by sharing what he said to Barack Obama when Obama entered office: “You can count on me to be loyal to you. I will not leak. I will keep my disagreements with you private. And if I cannot be loyal, I’ll leave.” While Gates was not supervising an investigation into Obama’s campaign—an important distinction—he referred to one of the central issues in Comey’s firing: his failure either to control or to investigate leaks about the Russia investigation. Comey owed Trump that loyalty, which—in a judicial system founded on the presumption of innocence, a media environment based on the presumption of guilt, and a political system increasingly defined by unfettered partisan attacks—would also serve the integrity of the investigation and the credibility of its eventual outcome.

Clapper’s modulated tone cannot conceal a political self-righteousness that contrasts sharply with Gates, whose similarly restrained tone seems to reflect something deeper: a sophisticated and practical approach to politically and strategically challenging problems that confront the United States. Completing investigations into the 2016 election in a manner that establishes the facts, responds appropriately and maintains at least some shreds of national cohesion afterwards won’t be easy. To get to that point, America’s institutions—including its media—will need more of Gates’s dispassionate approach and less of Clapper’s chest-thumping.

Paul J. Saunders is executive director of the Center for the National Interest, and a former senior State Department advisor in the George W. Bush administration.