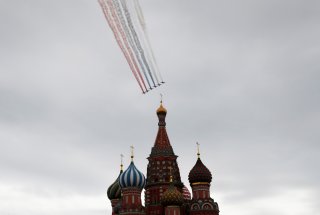 A close look at U.S.-Russian relations after 1991 reveals cooperation coexisting with conflict—at least in Russia’s perception of matters. Russia always opposed NATO enlargement. It opposed the Kosovo War. It opposed the Iraq War launched in 2003. Then, the United States opposed the Russia-Georgia War of 2008. None of this precluded an overall reset of relations in 2009, allowing for agreements on arms control and even joint activities in support of common objectives in Afghanistan.

Cooperation-amid-conflict can be theoretically and morally unsatisfying. It is unstable by definition, driven more by the necessity to cope than the desire to win. But given the massive nuclear arsenals of Russia and the United States as well as their sprawling global equities, it has proven its worth. At its best, the tension inherent to cooperation-amid-conflict has been an aid to the diplomatic imagination. It has inhibited zero-sum thinking and prevented worst-case scenarios from being realized.

WERE THE United States to pay serious attention to the interests of its Russian neighbor, what would it find? For post-Soviet Russia, the United States has been a serious problem. While Americans took satisfaction in the Cold War’s end, their lives were little changed. By contrast, life in Russia was radically transformed. Viewed from Russia, the United States government exploited the ensuing power vacuum to extend an “American system”—at times by invitation (NATO enlargement) and at times through force (the Kosovo War, the Iraq War). Russia felt disadvantaged by this arrangement and under Putin has pushed back. In an encapsulation attributed to Putin himself, Russia has been “rising from its knees,” economically and technologically. Later, Moscow advanced a far more assertive political and military posture worldwide.

Russian interests stem from a historically rooted and widely accepted view that the security of the state itself is paramount, because without it, there can be no safety, freedom, or prosperity for Russian families and individuals. This is certainly the premise of Putin’s avowedly statist regime. As a consequence, Moscow seeks to push problems onto the periphery and maximize leverage—by persuasion if possible and by coercion if necessary. (Washington is not so different on the issue of leverage.) Better conflict in Georgia, Ukraine, or Syria than at home. Better to impose terms on the international order than to have the international order impose terms on you. Russia’s goal is not to defeat or replace the United States; Russia lacks the requisite power, and knows it. The goal is to contain the United States and to check its power within a fluid, transactional, and multipolar international order. This is not the international order Russia wants to create. It is the order Moscow believes to be already in existence, and within which it is destined to operate.

U.S. interests (where Russia is concerned) are somewhat more diffuse. Immediately after the Cold War, the United States attempted to integrate Russia into an international order defined by democracy and market capitalism, but this project never gelled. Once Russia revealed itself to be an actor outside the script the United States had attempted to write for it, conflict ensued. The United States lamented Russia’s drive to push instability to its periphery, at first in the post-Soviet space. An aspirational containment, which was incapable of reversing Russian advances into Moldova, Georgia, and Ukraine, then confronted Russia’s challenge to the integrity of the NATO alliance in Europe, and its efforts to alter the regional order in the Middle East, empowering Iran and imperiling Israel. In line with this renewed containment imperative, the United States has drawn a line in the sand on democracy, resisting and deterring intrusions (cyber or otherwise) into its domestic politics and into the domestic politics of U.S. allies. If Russia is not the only source of this problem, it is the foreign country most willing to employ the many disruptive tools at its disposal.

Despite the divergence in worldview, Russia and the United States are neighbors not only in some overlapping global interests, and not just in the shared space of international contests, running the gamut from diplomatic spats to armed conflict. Like any neighbors sensible of themselves and their surroundings, Moscow and Washington also share a basic interest in limiting the costs of adversity—especially those cases which threaten to bring the two into direct confrontation.

The COVID-19 pandemic, for example, has forced both sides to reckon with the vast unanticipated costs of public-health responses, social-support programs, and reinvestment in devastated economies—despite differences in the pandemic’s timeline and scope of its impact in the two countries. In the years ahead, both sides will also need to re-evaluate spending priorities and to rethink the meaning of national security. While this process may or may not yield opportunities for cooperation between the United States and Russia, it will certainly cast the costs of the current conflict in a new light.

The Ukraine crisis has already forced much greater U.S. defense expenditures in the European theater, while U.S./EU sanctions have slowed the Russian economy. More severe sanctions could be devastating to Russia, and anything resembling war between Russia and a NATO member state would be immensely costly to both sides. The breakdown in arms control between Moscow and Washington risks profligate spending on a new arms race.

As in the Cold War, unconstrained competition between Moscow and Washington is potentially ruinous for both sides. The dangers are most acute and most obvious in the military sphere. An accident, a misread signal, or an excess of bravado could lead to an escalatory spiral. Precisely because each country has a nuclear arsenal capable of practically obliterating the other, there is almost zero chance of one side emerging victorious. Not for nothing is uniformed military “deconfliction” one of the few functional channels of U.S.-Russian dialogue at present.

The challenge of the U.S.-Russian relationship is that the overall interests of the two sides cannot be easily harmonized, and neither side is much inclined to prioritize limited areas of cooperation or compatibility over deeply felt differences. Too much conciliation and one side perceives itself as the loser. Too much tension and both sides lose, and potentially lose everything. Even if there is a median, it is unlikely to be a happy one.

DOES THE difficulty of finding compromise amid incompatible interests necessarily condemn neighbors to conflict? Not necessarily. Neighbors have the option of being clear with one another about their interests and red lines; each has the option of acquiring sufficiently deep knowledge of the other to understand disputes in their full context. In the best case, U.S. strategy towards its Russian neighbor would reflect the sum total of U.S. interests, balanced against the risks of opposing interests Russia considers vital and against the potential gains of cooperation, limited as they may be.

Faced with a multiplicity of ongoing direct and proxy confrontations with Moscow, Washington must consistently advocate and actively defend its own vital interests. It should clearly communicate its redlines to Russia: the security of NATO member states; political and economic stability in Europe, as well as Israel, Japan, and other regional allies’ security; American democratic politics unharmed by outside meddling. Having communicated these redlines, the United States must be willing to enforce them in ways that will be taken seriously by Russia. This may be sanctions or diplomacy but can at other times include adjustments in military force posture or even use of kinetic, cyber, or other coercive measures. Anything less risks eroding the deterrent logic of American redlines for Moscow.

Containing the costs of conflict between neighbors is a broader interest Americans must simultaneously pursue. At home, this means resisting any tendency to inflate threats emanating from Russia, as was common during the Cold War, when the Soviet Union was in fact a far more formidable enemy than today’s Russia could ever be. Externally, it entails consistent, regular diplomatic engagement with Russia, starting with heads of state and the national-security bureaucracy from political to working levels. Remarkably, there has not been such engagement between the two countries since 2011.

For de-escalation or diminution of tension to be possible at all, it must be shown to be desirable in the first place. As long as the leading official and public voices of both sides insist on an outcome to the current conflict that resembles America’s “victory” in the Cold War, or that of the Soviet Union over Nazi Germany, there can be no effective containment of the costs of conflict or the risks of escalation. It is here that the history of cooperation-amid-conflict over more than a century can be drawn upon, in both countries, for practical examples and for inspiration.

A successful American strategy will be sufficiently guided by an awareness of Russian interests and perspectives to recognize where added pressure may be warranted, and when the better path may be either compromise or outright line-drawing, recalling Robert Frost’s hoary maxim that good fences make for good neighbors. Washington should eschew moralizing about Russia as a many-tentacled malign creature or as some twenty-first-century incarnation of the Evil Empire. Rather, it should take careful note of Russian interests and do its best to formulate predictions of Russian behavior on the basis of these interests.