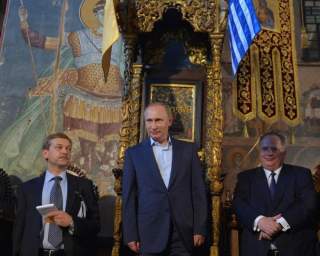 Russian society is actively discussing the recent visit of President Vladimir Putin to Greece, where he took part in the celebrations of the thousandth anniversary of Russian monks’ presence on Mount Athos. During his meeting with the clergy, the president said that Mount Athos is the source of society’s moral foundations. The leading Russian media, either on purpose or due to ignorance, embellished the ceremony at Mount Athos, claiming that Putin sat on the throne of the Byzantine emperors. In fact, Putin spent the service in a stasidion—a monastic chair with a folding seat designed for high-ranking honored guests in the temple. Nevertheless, Putin’s symbolic visit sparked joy among those conservatives in Russia who see this as a sign of ideological revival, under the slogan, “Moscow is the Third Rome.”

Many experts who are close to the Kremlin believe that Russian politics and diplomacy have led to a renewal of faith in great and mighty Russia. Thus, the well-known philosopher and writer Alexander Prokhanov states that since the collapse of the Soviet Union, Russia has begun the path to recovery by rejecting liberal Western civilization. Prokhanov identifies three characteristics of this revival: Russia’s victory in the war against Georgia in 2008, which led to the recognition of the independence of South Ossetia and Abkhazia; the return of Crimea which, according to Prokhanov, marks the beginning of the Russians’ union; and, finally, the third sign—a Eurasian Union. The Russian philosopher has written that the Eurasian Union would be Russia’s “fifth empire,” with several capitals and several control centers. In general, Prokhanov’s approaches are echoed in the works of many influential members of this community of conservative Russian experts.

The so-called Izborsk Club was established with the aim of unifying patriotic conservatives. Its main goal is to create and present analytical reports to the Russian authorities and society. All these works should contribute to creating a renewed public-oriented policy in all spheres of national life. The Izborsk Club’s ideological direction could be labeled social conservatism, which is a synthesis of the different views of Russian statesmen: starting from socialists and Soviet patriots to monarchists and Orthodox conservatives. Club members include the most prominent and influential politicians, such as Sergei Glazyev, the Russian president’s advisor on Eurasian integration; the Nobel-laureate scientist Zhores Alferov; popular writer Zakhar Prilepin; philosophers including Prokhanov and Alexander Dugin; the historians Natalia Narochnitskaya and Nikolai Starikov; and the journalists Maxim Shevchenko and Mikhail Leontyev.

In addition, in 2015, the Russian foreign ministry’s press center hosted a constituent assembly of the organization known as the Byzantine Club. Its founders say that the club’s goal is to claim Russia as the successor of the great Byzantine civilization. During the opening ceremony, the club’s president, a member of the Civic Chamber named Sergei Markov, said that Russia is another Europe, concerned not only with law and economics, but also with spirituality. Representatives of the Russian imperial-conservative movement believe that Russia should continue its special historic path that started with its adoption of Orthodox Christianity from the Byzantine Empire.

In his article entitled “Historical Perspective of Russian Foreign Policy,” Russian minister of foreign affairs Sergey Lavrov claimed that Russia did not break under the weight of the Mongol yoke and managed to emerge from this hardship as a united state. Subsequently, that government came to be regarded as a kind of heir to the Byzantine Empire in both the West and in the East. Mr. Lavrov also agreed with the philosopher Ivan Ilyin that great power is not determined by the size of a territory or the number of inhabitants, but by the capacity of the people and their government to take on the burden of huge international problems and cope with these issues creatively.

The idea of the Byzantine way as the ideology of the Russian state is not new. As already mentioned, Russia received Christianity from Constantinople (the “second Rome”), which became an undeniable global center after the schism of Western Christianity from Orthodoxy. Since the baptism of Rus’ in 988, the Ecumenical Patriarch of Constantinople was the canonical head of the Russian Church. Up until its fall, Rus’ was a part of Byzantium in terms of church governance. The marriage of Czar Ivan III to Sophia Palaeologus, the niece of the Byzantine emperor, was the first step on the way of Russia’s accession to the Byzantine heritage, establishing blood ties between the Russian sovereign and the Byzantine emperors.

Russia acquired not only its religion from Byzantium, but also its coat of arms: the double-headed eagle, which became a symbol of continuity. But the main thing that Russia inherited from the Byzantine Empire is its messianic consciousness. There have been three major national ideas in the history of Russia: “Moscow is the Third Rome,” “Orthodoxy, Autocracy, Nationality” and “Communism is the brightest future of all mankind.” Each emphasized the special mission of Russian civilization. Many Russian politicians and experts believe that it was a spiritual affinity with the Byzantine Empire that created Russian Christian civilization. Supporters of the Byzantine path to revival agree that both Russian and Western civilizations are Christian. However, according to today’s Russian ideologues, Russian Christian civilization is the last bastion of conservative values, whereas Western Christianity perished under the onslaught of immoral liberal ideas. Proponents also point out that Eastern Christianity, in contrast to the Western, proclaims loyalty to ancient times and unchanging ideals.

The importance of the Byzantine Empire to Russian civilization was highlighted during a conference called “The interpretation of the concept of ‘Moscow as the Third Rome’ in the East and in the West,” attended by members of both the Byzantine and Izborsk Clubs. Few argued with the speakers who said that Russia has its own historical path, which is the special mission of protecting moral values. Supporters of the “Moscow as the Third Rome” concept of revival are fully convinced that only Russia can liberate humanity from liberal ideology and demonstrate a new path of development.

At the same time, according to high-level Russian ideologues, the implementation of this particular mission is impossible without a strong leader, who is embodied by President Vladimir Putin. The conservative imperial elite sees Putin as a natural successor of the rulers of the Byzantine and Russian empires. He did not allow the destruction of Syria and Ukraine, and challenged the unipolar world. In this regard, it is not surprising that Putin’s visit to holy Mount Athos was received with special feelings among the Russian masses. It is not the throne that the Russian president sat on that matters. It is all about the symbolism, which emphasizes Russia’s special neo-Byzantine mission.