A Thirty Years' War in the Middle East 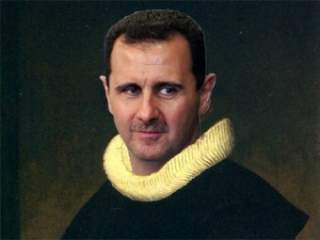 History teaches through the use of analogies. Inexact though these analogies may be, they represent one of the best ways to draw upon the past to inform, though certainly not dictate, the future.

In the wake of the end of the Iraq War and the vagaries of the Arab Spring-cum-Winter, the Middle East is ripe for an analogy to describe its present turmoil. One could do far worse than the hellish Thirty Years’ War that convulsed Europe between 1618 and 1648 and ended by bequeathing to the world the modern state system. Whether the present bloodletting in Syria, the ongoing geopolitical contest of wills between Sunni and Shia Muslim powers, and renewed Great Power rivalry yields anything approximating such a dramatic and long-standing order is questionable in the extreme. Yet it would benefit analysts to consider the similarities between that previous epoch shaping event and today’s ongoing drama.

The Thirty Years’ War was a massive and complex conflict that began with the notorious “Defenestration of Prague” on May 23, 1618. It was a multi-faceted affair that requires multiple lenses to look through in order to begin to understand it. It began as a religious conflict between Protestant princes in Germany fighting to preserve their autonomy and their faith against the Catholic Habsburg Empire to their south. Yet it would metastasize into a great-power conflict among several Catholic dynasties—the French, guided by the famed practitioner of realpolitik, Cardinal Richelieu, and the Habsburgs of both Austria and Spain. Richelieu, in a typically calculating move, allied with Protestant Sweden against France’s Habsburg coreligionists. Meanwhile, Spain, and its own Machiavellian political operative, the Duke of Olivares, worked to recapture rebellious Holland. Against this backdrop of sectarian and geopolitical conflict, individual personalities and power seekers (like the ambitious, if tragic, Albrecht von Wallenstein) came to the fore, along with a steady stream of petty German princes seeking to secure independence and new territory for their own dynasties.

The Thirty Years’ War was a particularly brutal conflict that was the world war of its century. Amazingly, given the disasters to follow in the twentieth century, a larger share of the pre-Reich German population died. Some estimate that as much as 40 percent of the German population died as a result of battle, deprivation, disease and famine. Of course, as alluded to above, the violence also led to a series of agreements that became part of the larger Peace of Westphalia and the formation of what is now known as the “Westphalian” state system. Today, international relations scholars take this system largely for granted.

The analogy is relevant today because it helps to illustrate, no doubt inexactly, the manner in which current Middle East is enmeshed in its own complex web of conflicts that are geopolitical as well as sectarian. Today the roles played by France and Sweden are played by the United States and Russia, along with an assortment of European states.

Even the beginnings of these two conflicts share certain symmetries. Today’s Middle East was set aflame through an act of desperate self-immolation by a food vendor in Tunisia. The European Thirty Years’ War began when Protestants rallied against the closing of their chapels by the Catholic emperor and threw three of his representatives out of a window (and probably onto a dung heap) in the infamous “Defenestration of Prague.” In both cases, long-standing frustrations and fears sparked a tinderbox long ready to explode.

The 2003 American invasion of Iraq reinvigorated the long-dormant Sunni-Shia conflict. The elimination of the Sunni minority Baathist regime of Saddam Hussein set the stage for the rise of the majority Shia population in Iraq. Not surprisingly, the rise of the Shia within Iraq also led to a new opportunity for Iran to move towards shifting the Middle East’s balance of power in a direction more favorable to it. The timing was propitious as it worked on a nuclear program thought by many to be a covert weapons program. And without a Sunni power on its border powerful enough to check Iran, the Saudis and other Sunni powers now had to prepare for a renewed conflict.

At the same time, the rise of Prime Minister Recep Tayyip Erdoğan’s Islamists and the subsequent development of a “Turkish” model for Middle Eastern development were felt in regional diplomacy, creating new potential constellations of power. Of course, the long-standing Israeli-Palestinian conflict remained a sore spot for Arab nations as did conflict with Iran’s Syrian-backed cat’s-paw Hezbollah that was well ensconced in Lebanon.

The pieces then were set for the Tunisian self-immolation that would lead to a regional conflagration:

* the fall of Muammar Gaddafi in Libya and the proliferation of weapons across North and West Africa;

* the quasi-coup in strategically vital Egypt that led to the end of the pharaonic Mubarak regime, the rise of the Muslim Brotherhood and yet another military intervention overthrowing their President Morsi;

* the civil war in Syria where chemical weapons have once again brought back reminders of Saddam Hussein and his Anfal campaign against the Kurds.

In the long run, the situations in Egypt and Syria are likely to be decisive for the future of the Middle East as were the many battles in the then-disunited German principalities of the seventeenth century.

Egypt’s population, strategic location, and relative peace since the 1979 peace treaty with Israel have given it an outsized role in the Middle East. However, since the resignation of strongman Hosni Mubarak in early 2011 and the removal of his elected Muslim Brotherhood successor, stability either will not be forthcoming anytime soon or will be purchased through a semi-authoritarian military regime that does not look all that dissimilar from that of Mr. Mubarak himself.

While Morsi’s ouster in a relatively bloodless coup opens opportunities for a more reasonable, technocratic government that might be capable of dealing with Egypt’s wretched economy, some skepticism is still in order. In the short to medium term, the military backed government to be led by assumed future President el-Sisi will probably be able to pacify the tumult brought about by Muslim Brotherhood overreaching. However, rising food prices, that have been a prime source for much of the “Arab Spring” unrest, will put pressure on the new government just as it did on the Muslim Brotherhood. However, a combination of actors will likely come to the Egyptian rescue including Saudi Arabia, who seeks Egypt’s backing for its covert war against Iran, and Russia, as it seeks to continue poking a weakening and ever-distracted United States. Should centralized authority in Cairo be unable to maintain order, a gamut of consequences will ensue, including the possible breakdown of the Camp David Accords with Israel. This is more than an academic exercise as the rise of more radical Salafi Muslim parties in the wake of the Muslim Brotherhood’s removal from government only increases the challenges to maintaining centralized control over time.

That this is happening simultaneously with Syria’s descent into hell represents dire portents. There is no question that a full-scale civil war is underway there with over one hundred thousand lives estimated lost and atrocities committed by both warring parties, including the use of chemical weapons. Additionally, Syria’s carnage has spilled over into Lebanon and continues to threaten hope of stability there. Already there are suicide bombings and tit-for-tat acts of retribution from and against the Shia militia Hezbollah.

Of course, interspersed within this labyrinth of tensions is the perennial Israeli-Palestinian challenge. With U.S. Secretary of State John Kerry doing his best Don Quixote impersonation, this issue has jumped back into the headlines even amongst the carnage in Syria. Chances of resolution are almost nonexistent with the most likely result of all this diplomatic huffing and puffing being further distrust between Israelis and Palestinians that will make even the remotest prospects for peace remoter still. Further, Israel has much larger fish to fry due to existential fears concerning the Iranian nuclear program and the potential for a possible breakdown of order in Egypt. Already, Sinai has emerged as a flashpoint between Egypt and Israel despite the Egyptian military’s apparent desire to mitigate terrorist actions there.

The future likely holds more jihadist migration around the region, more starvation, more disease and more terrorism. And what will become of small, fragile monarchies like Jordan, Kuwait, Qatar and the United Arab Emirates? These countries have largely escaped unrest, but it’s doubtful they can indefinitely.

Finally, we should examine the Great Power component of this toxic brew.

Russia is now playing the most significant role in the region it has had since Kissinger’s “shuttle diplomacy” helped push the Soviet Union out in the wake of the Yom Kippur War in the 1970s. President Putin has clearly chosen to back the Assad regime to the hilt, both for geopolitical reasons and domestic concerns regarding possible Islamist uprisings within his own borders. This has proven to be another bone of contention between Russia and the United States and tensions will inevitably increase as the looming Cold War 2.0 between Russia and West picks up steam in Ukraine. Even more significantly, Russia is clearly angling to play a major spoiler role in U.S. and European diplomatic efforts to restrain the Iranian nuclear program. As events in Ukraine and Eastern Europe continue to decline, Russia will no doubt play the Iran card. Besides blocking diplomatic progress, Russia is likely to resume cooperation over building nuclear power plants in Iran. This will only exacerbate the Sunni-Shia and Israeli-Iranian tensions. Nor is this the only sandbox in which Putin is playing. Russia is looking to resume a privileged position in Egypt in the wake of Egyptian disillusionment with America’s whipsaw policies since the heady days of Tahrir Square.