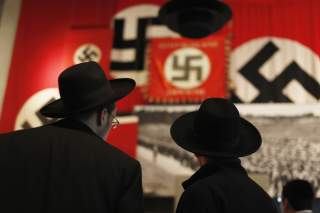 IN FEBRUARY 1938, Thomas Mann and his family sailed from Cherbourg, France to New York, where they were greeted by a throng of reporters and a film crew from the Paramount News Corporation. Mann, who had won the Nobel Prize in 1929 and appeared on the cover of Time in 1934, decried British prime minister Neville Chamberlain’s policy of appeasement and correctly predicted that Hitler would annex Austria forthwith. Later that day, Mann, after being asked whether he found exile a lonely state of affairs, responded,

It is hard to bear. But what makes it easier is the realization of the poisoned atmosphere in Germany. That makes it easier because it’s actually no loss. Where I am, there is Germany. I carry my German culture in me. I have contact with the world and I do not consider myself fallen.

Like Bertolt Brecht, Lion Feuchtwanger and Arnold Schoenberg, Mann ended up living in a German enclave that became known as Weimar on the Pacific. Mann was not only the most prominent member of the exiles, but also the one who had probably traveled the furthest politically. In 1937, the German philosopher Günther Anders observed:

his enemies will be amazed by the tragic violence of a man they had always derided as the master of ceremonies of German prose. They will be amazed all the more by the fact that Mann speaks as a patriot, thus seizing the claim staked out by the present rulers of Germany.

There can be no doubting that Mann had performed something of a volte-face. During World War I, Mann had written a murky paean to German nationalism, Reflections of a Nonpolitical Man. It was supposed to serve as a counter-blast to his older brother Heinrich’s woolly-headed humanitarian socialist beliefs. Mann, a lifelong neurasthenic who shirked service in the imperial army and recorded his medical ailments with unswerving fidelity in his diaries, loftily termed Reflections a kind of “intellectual military service.” He declared that the country’s essential mission was battling the decadent Western democracies. Mann, who believed France and England were intent upon foisting doctrines that were “foreign and poisonous to the German character,” held that the profundity of its culture meant that the German nation was itself fated to transcend mere politics. Mann went to town:

After World War I, Mann, who was living in Munich, had good reason to alter his sentiments as he watched Hitler’s alarming rise in what the Nazis termed the Hauptstadt der Bewegung, or capital of the movement. It was a case of disorder and early sorrow for the fledgling Weimar Republic. Mann, who had married Katia Pringsheim, the daughter of a wealthy Munich Jewish industrialist in 1905, was a staunch supporter of Weimar. Already in 1921 he had dismissed the nascent Nazi party as “Swastika nonsense.” His novel The Magic Mountain, which appeared in 1924, acutely diagnosed the malady afflicting Central Europe. Mann has one of his characters, the fanatical Jesuit priest Leo Naptha, aver, “[t]he mystery and precept of our age is not liberation and development of the ego. What our age needs, what it demands, what it will create for itself, is—terror.”

After Hitler was appointed chancellor in 1933, Mann and his family moved to Switzerland. For several years, Mann was reticent about events in Germany, fearful of being sundered from his readership by the Nazi regime. He did not attack the Third Reich publicly until February 1936, when he denounced German anti-Semitism in an open letter in the Neue Züricher Zeitung, stating that the barbaric campaign Hitler’s paladins were waging was “aimed, essentially, not at the Jews at all, or not at them exclusively. It is aimed at Europe and at the real spirit of Germany.” Mann’s broadside prompted The New Republic to write an editorial in April 1936 praising him: “It is news in the international republic of letters when Thomas Mann comes out in opposition to the new Germany.”

IN THOMAS Mann’s War, Tobias Boes carefully scrutinizes Mann’s embrace of his leading role in that cosmopolitan literary fraternity. By the late 1930s, Mann had come to embrace Johann Wolfgang von Goethe’s famous dictum in his conversations with Johann Peter Eckermann that the nation-state would become a less significant arbiter of literary greatness and that the “epoch of world literature is at hand.” Boes, who is a professor of German at the University of Notre Dame, maintains that this was at the core of Mann’s conception of himself as a writer in exile and anti-fascist polemicist. Boes’ superb account is based on extensive archival research, including Mann’s personal letters, as well as keen assessments of his novels. It maintains that during his stay in America, Mann reinvented himself as a public figure. He wrote several influential essays attacking Nazism, held a series of lectures at the Library of Congress that were often attended by prominent government officials and met Franklin D. Roosevelt several times. He became not only an embodiment of German culture for Americans, but also a personal antagonist of Hitler.

One of Mann’s most revealing publications in America was thus the essay “Brother Hitler.” It originally appeared in Esquire in 1939 under the title “That Man is My Brother.” In it, Mann performed a reckoning with his own past, contending that Nazism was centered in cultural movements of the fin de siècle era and that he had, more or less, drawn upon them in his own works. Mann emphasized that Hitler was a “disappointed bohemian artist” and drew links between him and his own characters such as the snobbish artistic dreamer Detlev Spinell, the protagonist of the short story Tristan. Even Death in Venice, Mann wrote, strayed into dangerous waters with its “talk of simplification and resolution of mind.” It contained, Mann wrote, “ideas which twenty years later were to be the property of the man in the street.”

Boes perceptively notes that Mann also linked the artist to the dictator by suggesting that Hitler had simply discovered a broader canvas on which to limn his sanguinary vision, relying on incantatory tools of political persuasion rather than rational ones. The fascist rallies, the torchlight parades, the smoking braziers—all were, at bottom, debased Wagernian spectacles that were fashioned to sweep their spectators into a frenzied delirium of loyalty to the Führer, a phenomenon that historians ranging from George Mosse to Frederic Spotts have explicated in analyzing German culture and Nazism. Unlike Walter Benjamin, who wanted art to be subordinated to politics, Mann asserted that it was the task of the artist to recapture his implements from the dictator: “More clearly and happily than ever will the artist of the future realize his mission as a white enchanter, as a winged, hermetic, moon-sib mediator between life and spirit.” Mann had created, or at least announced, a manifesto that would preoccupy him over the next decade. The reference to a “winged, hermetic, moon-sib mediator” was an allusion to Mann himself, who identified with the Greek god Hermes. Boes is on the case:

Art, harnessed for ill ends, had given rise to Nazism and as an artist Mann was better positioned than nearly anybody else to diagnose this problem. At the same time, the democracies of the future would clearly require the support of artists, whose task it would be to stay alert to any misappropriation of their trade.

BOES DOES not mention it, but for all his rebarbative pronouncements about the West in Reflections, Mann had drawn a flattering portrait of Americans in his beguiling 1909 novel Royal Highness—a kind of fairytale that features a spunky American heiress named Imma Spoelmann who marries Prince Klaus Heinrich, thereby helping to rescue a German principality gone to seed. Now, Mann had to plight his troth to the New World. The Lübeck patrician, the literary sage, the apostle of Goethe and Schiller, had to take a backseat to his new incarnation as an anti-fascist warrior. He hit the social circuit, delivering lectures, interviews and banquet speeches. He became a Mann for all seasons. In the 1920s and early 1930s, Boes writes, Mann was typically photographed with averted eyes, furrowed brows and pen in hand: “the joint effect of these conventions was to give him a remote, intellectual appearance—the visage of a man whose genius was best approached through his writing.” Now the author began to eclipse his own literary work. Mann’s American photos showed him in a very different pose, turned directly towards the viewer, seated in an armchair and dangling a cigarette. According to Boes,