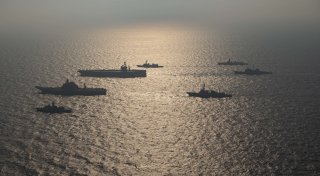 THE BIDEN administration has the potential to become an administration of utmost historic significance by reviving the United States’ position as the global leader in maintaining and expanding the liberal international order.

In order to rise to this challenge, it must deal with three issues vital to the United States as well as the world order: COVID-19, foreign policy with a focus on China, and international trade.

The words of John F. Kennedy perhaps best express the challenge facing the United States’ standing in the world today: “A nation can be no stronger abroad than she is at home.” The failure to properly address the COVID-19 crisis has created domestic turmoil while the United States’ lack of control over the virus’ spread has played out in front of the eyes of the world. According to the current statistics from the World Health Organization, nearly 20 percent of all the reported Covid deaths and cases came from the United States, while the country only occupies 4 percent of the world’s population.

Before even looking at its foreign policy, this situation makes it inevitable that the new administration will have to give high priority to domestic policy issues in setting its agenda. In order to stabilize U.S. domestic politics, Joe Biden must first fight and win against COVID-19.

Biden has already expressed a desire to mandate masks across the United States. This is a must. While a national mask mandate is likely not possible through a presidential order alone, mandating masks on federal property would have a widespread effect and he could use his political power to push governors to require masks.

With the politicization of masks in the United States, this could lead to a kind of “civil war”—but one that Biden will have to win.

Furthermore, the American public is not aware of how the inability and failure to tackle COVID-19 has done damage to the United States’ standing in the world. While the American economy is currently recovering, it could plunge into a depression if the United States should fail to contain COVID-19. Both the real decline of the United States, along with the perception of it, would be perpetuated, and this in itself could enormously destabilize world peace. In the end, the values of American democracy could end up being ridiculed throughout the world.

As the Biden administration prepares for its entry into the White House, it must clearly articulate its foreign policy, and in particular, it must learn lessons from the mistakes of both the Obama and Trump administrations. The biggest issue will be how to manage the relationship with China.

Crucial to the new administration’s foreign policy will be a bipartisan consensus on China policy. Luckily, this is doable despite the United States’ current profound division as both parties seem to recognize the threat that China poses to American interests.

Central to that policy is the necessity to both compete and coexist. Competitive coexistence puts competition at the front and center, acknowledging that the United States must resist Chinese unilateral domination in such fields as economics, technology, and global governance, as well as its pursuit of a “closed sphere of influence.” At the same time, it maintains the common understanding that the United States does not intend to change China’s political system nor will China alter the free and open international order. It is a recognition of the fact that if you want to coexist with China, you must compete.

In other words, the Biden administration must acknowledge that the United States faces an unavoidable great power competition with China.

It therefore must focus on three areas in particular, in which the competitive coexistence strategy must be pursued most vigorously.

The second area is geoeconomics, particularly national cyber power. The United States must realize that it is lagging behind China in critical areas such as AI and machine learning, and act quickly while this gap between the two countries can still be closed.

Finally, green energy is an area that the United States can and should engage with China so as to respond to the challenge of global warming, alongside such other global issues as the pandemic. However, even here the Biden administration should be advised to put its policy on engagement with China on global issues into the framework of competitive coexistence.

The greatest challenge of the Biden administration will come in the form of trade. So far it seems that it will adopt a policy similar to Trump’s “America First” with its plan to tighten the “Buy American” requirements for federal government procurement—despite such a policy being in violation of World Trade Organization rules. You could perhaps call it “America First: Lite.”

Traditionally, the Democratic Party has been rather protectionist. However, it increasingly looks obliged to compete with the new brand of Republican protectionism under Donald Trump, particularly with regard to trade. This puts the new administration at an extreme disadvantage for competing with China and strengthening its ties with Asia, as trade is exactly how China has increased its influence within the Asia Pacific.

By the end of the Biden administration in 2025, the United States should once again participate in the Trans-Pacific Partnership. That will be the surest way for the United States to strengthen the liberal international order in the Asia Pacific. It will have to come up with an alternative narrative to “America First: Lite.”

Finally, there is one caveat: the new administration should avoid catching itself in the trap of “Anything But Trump.” This is particularly important with regard to the Free and Open Indo-Pacific Strategy (FOIP). FOIP’s vision must rather be further explored and strengthened, even though it emerged during the Trump administration, as it is now increasingly supported by like-minded countries in the Indo-Pacific.

Yoichi Funabashi is Chairman of the Asia Pacific Initiative, a Tokyo-based independent think tank, and a co-editor (with G. John Ikenberry) of The Crisis of Liberal Internationalism: Japan and the World Order.