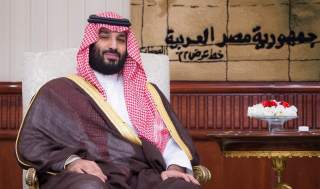 Who ordered the murder of Jamal Khashoggi, the Saudi dissident writer and Washington Post columnist who was ambushed and killed last month in the Saudi consulate in Istanbul by a fifteen-man assassination squad? Courtesy of in-depth reporting from the late Khashoggi’s former employer, that question is now all but answered. Based in part on electronic U.S. intelligence intercepts and other evidence handed over by Turkish authorities, the Central Intelligence Agency has concluded with high confidence that Saudi Crown Prince Mohammed bin Salman (MbS) likely gave the kill order.

With Riyadh’s culpability in the murder increasingly apparent, there is another mysterious question that deserves an answer: why does President Donald Trump continue to refer to the Kingdom of Saudi Arabia as a strategic ally of the United States? Addressing reporters on November 17 en route to California, Trump called the Saudis “a great ally” in the Middle East and a “truly spectacular ally in terms of jobs and economic development.”

Nothing could be further from reality. Saudi Arabia is not an ally the United States can depend on, nor has it proven to be an especially helpful security partner either. Saudi Arabia, rather, is a nation with its own unique set of national interests, some of which align with America but many of which do not. The sooner the Trump administration sees the U.S.-Saudi relationship for what it is—and equally important, what it is not—the sooner Washington can undertake the strategic reassessment that is urgently required and long past due.

For decades, the American people have been sold by their leaders the idea that U.S.-Saudi ties being indispensable to the security of the U.S. homeland and a vital facet of promoting peace in the Middle East. With a few notable exceptions—Harvard University Professor Stephen Walt and former U.S. Ambassador to Riyadh Chas Freeman among them—the foreign policy intelligentsia and commentariat have eagerly served as the messenger of this hypothesis. U.S. administrations across the political divide have reflexively viewed the Saudis as integral to containing Iranian power in the Middle East, stabilizing energy prices during gluts in the energy market, and providing America with instrumental information on terrorist groups like Al-Qaeda in the Arabian Peninsula.

Most of these arguments, however, are hyped, exaggerated, and inaccurate. Riyadh’s behavior is as clear an indication as any that, far from being the amazing ally the foreign policy establishment frequently claims, the Kingdom is at best a nettlesome, half-hearted partner on very specific issues of common interest.

Concerning stabilizing the oil market, the Saudis have a mixed record. Riyadh’s motivation in maintaining stability in the market has nothing to do with being a good friend to America and everything to do with Riyadh’s economic interest. A country that depends on oil returns to pad its budget, build up its foreign exchange reserves, and finance its national subsidies on everything from gasoline and food to housing can’t afford a long period of low profits. If prices rise too high over an extended period, the Kingdom will increase crude exports to preserve market share and assure that overseas buyers don’t switch suppliers. The Saudis do so not as a favor to the American consumer but rather as a necessity their bottom-line.

Moreover, the Kingdom’s role as a force multiplier for the United States is also vastly overstated. The facts belie the idea of Riyadh as a stabilizing force in the Middle East. Since Mohammed bin Salman was named Defense Minister in 2015 and ascended to second-in-line to the throne in 2017, Saudi Arabia has been as destabilizing to the region’s security and politics as its Iranian archenemy. In fact, Saudi foreign policy under the reign of Crown Prince Mohammed has been an unending series of humanitarian debacles punctuated by strategic recklessness.

For instance, Riyadh’s three and a half year air campaign in Yemen has failed in its primary military objective of pushing the Houthis out of the Yemeni capital and back into the northern highlands. Instead, Saudi (and Emirati) bombing has transformed Yemen into hell on earth, where small children die of disease and starvation every day, weddings are turned into funerals, food is enormously expensive, and the country’s economy is insolvent. The Saudi-led political isolation and economic blockade of Qatar, meant to force Doha to sever relations with Iran, has only solidified ties between both. The kidnapping and forced resignation of the Lebanese prime minister earlier in the year—later taken back upon his release under French pressure—was an international embarrassment, giving further proof to MbS’s highly impulsive decision-making. Finally, there is now the state-sanctioned murder of a permanent American resident and journalist, apparently on the orders of the Crown Prince. This has exposed the Saudi government’s true nature to the world: that of an authoritarian system run by fear of dissent, self-interest, and paranoia.

Amidst all of these developments, Washington can no longer drag its feet or offer more explanations to excuse the Kingdom’s poor judgment. A bipartisan majority in the U.S. Senate is finally coming around to that judgment, having voted last week to move forward with a bill that would remove U.S. military forces from Yemen’s civil war. The vote in the Senate came several weeks after the Trump administration’s recent decision to terminate mid-air refueling support to Saudi jets in Yemen, is a long overdue but welcome change of course. But U.S. policy would benefit from a hard-nosed, uncensored reappraisal of the entire decades-old U.S.-Saudi relationship.

First, President Trump must stop posing as the unofficial spokesperson to Crown Prince Mohammed, a man who has done more damage to the Kingdom’s international reputation than the fifteen Saudi nationals who executed the 9/11 terrorist attacks on America. While cutting diplomatic, intelligence, and trade ties with Riyadh would certainly be a mistake, so would continuing to cast MbS as a reformer in an otherwise dark region.

Second, the administration must put its relationship with Riyadh in a more accurate context. Preserving conditional ties with the Saudis may be prudent, but viewing U.S.-Saudi relations as too big to fail is a gross misreading of the situation. Tying American power and prestige to the hip of Saudi Arabia severely diminishes America’s diplomatic flexibility. Additionally, viewing Riyadh in such a light gifts Saudi Arabia with far more leverage than it is entitled to. That leverage opens up Washington to military interventions in the region—like the civil war in Yemen—that the United States has no national security justification participating in.

Third, President Trump must view the Kingdom for what it is rather than what he wishes it to be. It’s not an ally on the same threshold as the United Kingdom, France, Canada, or Australia, and it shouldn’t be given the distinction of being one. Bluntly put, Saudi Arabia is a country like most of its neighbors: despotic and highly repressive to all forms of dissent, but one the United States may have to collaborate within certain instances.

If there is any good that can come out of Mohammed bin Salman’s disastrous reign as Saudi Arabia’s de facto ruler, it’s that the Crown Prince’s bungling and extremely poor judgment will shock U.S. lawmakers and policymakers into reality. The sooner Washington recalibrates its relationship with the Kingdom, the better off America—and the region—will be.