Through Beijing's Eyes: How China Sees the U.S.-Japan Alliance 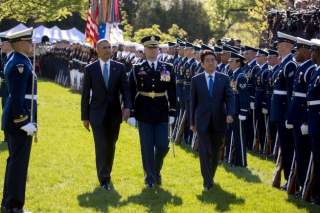 In the wake of Abe’s visit to the United States, the Chinese will likely assess the U.S.-Japan alliance as robust and therefore not vulnerable to Chinese pressure, at least through the end of Abe’s term in office. Despite this assessment, however, Beijing will probably not give up on efforts to abolish U.S. regional alliances. Rather, China will focus its attention on undermining U.S. alliances in Asia it deems more susceptible to Chinese influence. Such attempts are already visible in Chinese pressure on South Korea to forego deploying Terminal High Altitude Area Defense (THAAD) systems to defend against the growing threat from North Korean ballistic missiles.

Beijing may also seek to use economic incentives in its relations with Australia to weaken the bonds of friendship between Washington and Canberra. Once Philippine president Benigno Aquino leaves office, the Chinese are hoping that a new leader will see the folly of challenging China in the South China Sea and instead take advantage of Beijing’s economic largesse. The Chinese are pragmatic and patient; they know China cannot supplant U.S. alliances with a new security architecture that is more favorable to Chinese interests in a span of a few years. China will not give up easily, however. Xi Jinping hopes to make as much headway as possible toward this goal during his term in office.

Bonnie S. Glaser is a senior adviser for Asia in the Freeman Chair for China Studies, Center for Strategic and International Studies. Brittney Farrar is a CSIS research intern and M.A. candidate in the Security Studies Program at Georgetown University.