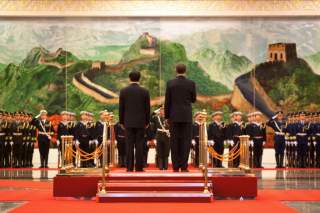 Though Russian troops gather on Ukraine's border, and civil war devastates Aleppo, the view from Washington still sees the 'big story' of this century as the rise of China and the mischief it entails. The big question is about the potential switch from an American to an Asian century and the bloody reckoning this could bring with it. Are America and China on collision course in the tradition of Athens and Sparta, or Imperial Germany and Edwardian Britain?

Some observers, such as Graham Allison and Joseph Nye of Harvard University, and recently strategist Zbigniew Brzezinski,sense that the problem is all Greek. They turn to the Athenian general and historian Thucydides, and his history of the Peloponnesian conflict that long ago tore apart the Hellenic world and wrecked Athenian power. As Thucydides wrote, Athens' growing power frightened Sparta, determined to hold the status quo. The power shift bred suspicion, and suspicion bred war. Likewise, unless they strike a bargain, Washington and Beijing might walk into a 'Thucydides trap.'

Thucydides did portray a trap, and his account of an ancient war warrants attention. But the trap he spoke of was more insidious and closer to home. His prime theme wasn't with the external origins of superpower war. The real snare in his History was not the murder of great powers, but their suicide.

Sparta-Athens comparisons often come to the lips of American strategic thinkers. That Thucydides did not lay out a sustained explicit theory, and that his opinion is hard to extract from the arguments he recreated, does not stop people from ransacking his history for lessons. During the Cold War, some looked to Athens as America's surrogate, a democratic, dynamic naval power confronted by the Soviet land empire and garrison state. It is a discomforting analogy. When Henry Kissinger spoke of the Soviets as 'Sparta to our Athens,' a journalist asked 'Does that mean we're bound to lose?' During hot 'small' wars, debate turned to Athens' calamitous Sicilian expedition as a parallel to Vietnam or Iraq. But with an emerging power challenging the existing strategic order of the Far East, attention turns back to the Greek precedent of bipolar rivalry.

Through the lens of 'China anxiety,' Thucydides' history stands as a perpetual reminder of the dangers of power transition. It is hard, pessimists fear, for one power to rise and the other to decline without clashing as they pass. The deeds of Beijing and Washington suggest an escalating rivalry that will get harder to keep within limits. For all the soothing rhetoric about pivots, rebalancing and the protection of norms, the hard reality is a tightening ring of American alliances and an ever-more-assertive Asian heavyweight pressing its territorial claims and pushing out its defense perimeter. And deny it all he likes, Obama isn't shifting over half of American naval assets to the Asia Pacific to contain pirates.

But contrary to fatalists, power transitions do not necessarily lead to wars. As James Holmes argues, Britain avoided clashes with imperial France, the United States and Japan before 1914. Thucydides made a different lamentation that should resonate for the United States: about the way Athens' foreign policy disaster was born in civil strife. Growing power led to a loosening of restraint and the corruption of language. The 'root cause' was not the hegemonic challenger's rise, but Athens' own growth, generating a lust for power and destructive politics with 'national security' as the totem. Foreign-policy debate suffered. In the debased rhetoric of the time, hardliners and opportunists treated the prudential regard for limits as unpatriotic cowardice.

In Book Three, Thucydides' description of wartime rhetoric bears resemblance to today's gridlocked politics. 'Words had to change their ordinary meaning....Reckless audacity came to be considered the courage of a loyal ally; prudent hesitation, specious cowardice; moderation was held to be a cloak for unmanliness; ability to see all sides of a question, inaptness to act on any...The advocate of extreme measures was always trustworthy; his opponent a man to be suspected.' An aristocrat exiled by the people's vote, Thucydides portrayed a volatile Athenian population misled by demagogues that whipped it up. Even allowing for his disdain for unruly democracy, we can recognize in his History a useful warning. Power generates an obsession with status and the projection of strength, mutates into imperial swagger, and coarsens domestic politics. Domestic political spite in the imperial capital leads to moral and strategic failure, precisely because it makes sober debate difficult.

So, in today's democratic superpower, restraint is labeled 'timidity.' A reluctance to risk more American casualties in peripheral wars is 'fecklessness.' Concern that a state with a multitrillion dollar debt should shift some burdens to rich allies, scale back some ambitions, and bring its commitments and power into balance is 'isolationism.' Despite sanctioning and negotiating with Iran, strengthening ties with East Asian states, attempting to broker peace in the West Bank and Syria, critics charge the Obama administration with 'turning inward' and a 'global retreat.' For Condoleezza Rice, reductions in the defense budget and failure to leave a residual presence in the Iraq she helped Pyrrhically to liberate add up to a forsaking of 'leadership.'

Such rhetorical poison runs in both directions. President Obama might break a wintry smile at Thucydides' description of intemperate rhetoric. But his own party has its share of opportunists more concerned to appear tough than get serious. The lack of serious opposition to the dogmatically conceived invasion of Iraq flowed in part from the reluctance of many congressional Democrats to ask difficult questions, or even read the intelligence reports. Only when the body count rose and intelligence failures emerged did they discover that the Neoconservatives made them do it. A climate of hysterical accusation prevents the formation of a party of caution, and impedes the measured consideration of hard choices, including one of the hardest choices of all—whether to pursue primacy or balance in Asia.

The mutual spiral of domestic disarray and strategic error loomed soon after the United States became a superpower. Journalist Walter Lippmann warned during the Korean War that the crisis of the escalation of the war into a dangerous clash with China rose from a fatal symbiosis between growing strength and bitter domestic politics. The unwise expansion of the war into northern Korea, the agitation for taking the war into China and the rise of McCarthyist politics fed off each other. Truman was judged harshly—but by the very standards his own over-reaching Doctrine raised, trapped in a set of crusading images of his own making. This 'Lippmann Gap', between means and ends, fed and was fed by the kind of partisan rancor that today resurfaces in American politics.

Since then, every major, prudent move of retrenchment and adjustment has drawn charges of appeasement and weakness, from President Richard Nixon's realignment with China, to Ronald Reagan's arms control negotiations with the Soviet Union. Both Thucydides and Lippmann were pessimistic about democracy, believing that it needed elite guardians to steady the ship. But one need not reject democracy to agree with their diagnosis. Effective statecraft, and its unraveling, begins at home.

A glance at the history of major powers suggests that their fall originates more in self-inflicted wounds than in the challenge of rivals. As Steven Van Evera writes, since 1815, great powers have been conquered on eight occasions. On six of those occasions, the aggressors were fuelled by 'fantasy-driven defensive bellicosity.' A nuclear-armed, distant maritime-air heavyweight and liberal democracy like America may not go the way of Imperial Japan, Wilhelmine Germany or Napoleonic France. But by falling prey to its own fears, it could become its own worst enemy.

Avoiding a clash will take compromise from both America and China, and a willingness to reconsider their security horizons and renegotiate their universe. This difficult adjustment will need the formation of coalitions at home. Rhetorical absolutes, and the hollow vocabulary of 'retreat' and 'leadership', are particularly unsuitable to the nature of the Asia-Pacific, because that region makes sheer dominance difficult. For China, as for the United States, a maritime military balance will make conquest by anyone difficult. While a rising China will be constrained by a neighborhood of wary adversaries, the United States with its debt-deficit problem will be lucky if its unipolarity lasts. This difficult equilibrium is the reality. A milder language, therefore, is needed for America to pick its way through the chaos, and dodge the trap.

Dr. Patrick Porter is Reader in International War and Security at the University of Reading. His research interests are diplomatic and strategic history, U.S. and United Kingdom grand strategy, and the history of strategic thought. He is a fellow of the UK Chief of the Defence Staff’s Strategic Forum, and a contributing editor to Infinity, a new online strategy journal. Dr. Porter is the author of Military Orientalism: Eastern War through Western Eyes (Columbia University Press and Hurst, 2009) and The Global Village Myth: Distance, Strategy and Modern War (Georgetown University Press, forthcoming). He authored articles in International Affairs, War in History, Diplomacy and Statecraft, the Journal of Strategic Studies, War and Society, Historical Research, Security Dialogue, Parameters, and the RUSI Journal, and has written op-eds for Le Monde Diplomatique, The Guardian, The Age, and The Sydney Morning Herald.