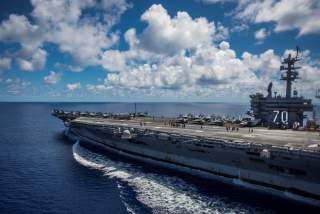 The fact that Asian political institutions remain immature leaves American military preponderance and regional commercial integration as the main brakes on escalation. Ideally, the U.S. military presence in Asia can serve to maintain a strategic balance in the Pacific, such that diplomatic bodies can rise to the occasion, as they did in postwar Europe when America’s security umbrella enabled political integration to advance. The French foreign minister Robert Schuman wisely foresaw that once the French and German commodities markets were integrated through the European Coal and Steel Community, the two countries would jointly own a merged supply chain and could never fight again. To some degree, this is clearly what is happening as Asian supply chains integrate across numerous sectors.

And yet American analysts and media constantly jostle for attention when it comes to shrill proclamations that war is afoot, echoing the drumbeats of nationalist leaders’ posturing from Iran to North Korea. But within days or weeks, when the situation has returned to idle, no public explanation is given, nor media attention devoted, to explaining why calm has been restored.

The commonsense truth is that while leaders talk about “red lines” for public consumption, and navies come dangerously close to trading direct fire, the stock markets churn forward, knowing that there are two kinds of mutually assured destruction at play: military and economic. Military maneuvers don’t tell us enough about what drives leverage among great powers nor what they are willing to fight over. The tangled complexities of today’s system force leaders to think beyond borders and make functional calculations about the cost-benefit utility of their strategies—knowing full well that supply-chain warfare involves not just an enemy “over there” but also one’s own deep interests “over there.”

Can we forever transmute war into tug-of-war? Each day we wake expecting to hear that Israel has attacked Iran, Russia has annexed another former Soviet republic or North Korea has launched an invasion of the South. World War III should have broken out ten times over by now, yet not one of these major geopolitical tensions has erupted. Even in today’s hot spots, tug-of-war dynamics are more revealing than resorting to Thucydides Trap warnings. Four decades of U.S.-Iran hostility have culminated neither in direct military confrontation nor successful isolation, but rather in a multidirectional tug-of-war over access to Iran’s markets, with Europe and China in the early lead as America fights with one hand tied behind its back in a futile attempt to maintain comprehensive sanctions. Russia’s invasion of Ukraine has also failed to escalate past the point of no return. Rather, Europeans have found plenty of ways around sanctions and, despite the Trump administration’s curious shift in treatment of Russia from campaign to White House, there is an inevitable sense that Russia’s seizure of Crimea will gradually attain de facto acceptance and Euro-Russian relations will normalize. And for all the bluster by Trump about the end of “strategic patience” with North Korea, neither the United States nor China will risk World War III or uncontrollable chaos on the Korean Peninsula. What Russia, Iran and North Korea have in common is that they are scarcely connected to the formal global economy. Russia only joined the WTO in 2012. Is the solution to rebellious countries on the fringes of the global system military punishment or greater integration?

Waiting for World War III thus reminds us of Samuel Beckett’s Waiting for Godot, in which Vladimir and Estragon resolve to hang themselves if Godot does not arrive—so they simply sit endlessly. Their would-be savior, Godot, of course never comes, but the protagonists never actually commit suicide either.

IT IS easy to detect where the conditions for conflict are ripe and proclaim that war is at hand. While it is no doubt unwise to argue that World War III is a passé risk, in our haste to make analogies between today’s global dynamics and European conflicts of a century ago, most observers have missed the enormous differences. European nations traded heavily across each other prior to World War I, but they did so as vertically integrated mercantile empires exploiting raw materials from their own vast colonies. They traded in finished goods and didn’t outsource production to each other; we did not have today’s international manufacturing networks in 1895. The nineteenth and twentieth centuries brought trade interdependence; in the twenty-first century, we have complex supply-chain dispersal as well.

The growing depth of global cross-border trade and investment makes tug-of-war much more complex than in previous geopolitical eras. In numerous sectors, such as automobiles and electronics, the import quantity of exports hovers near 50 percent, meaning much of what we sell to each other is made from things we’ve bought from each other. Under a Cold War geopolitical paradigm, rivals wouldn’t invest in each other either; the United States and the Soviet Union certainly didn’t. But today’s robust flows of global investment among friends and enemies further highlight how we have shifted from a Westphalian world to a supply-chain world. The world’s leading powers have become financially integrated, with investment linkages as important as trade relations. This comes in the form of both the trillions of dollars of assets invested in each other’s currencies and equities and the tangible, productive capital—factories, real estate, banks, agriculture—they have bought and built inside others’ territory to efficiently and profitably access each other’s markets. Calculating one’s own wealth absent the stock and flow of foreign assets and trade becomes an increasingly tenuous exercise.

Supply chains thus diminish the incentives for conflict, while decoupling from them raises the potential for antagonism to escalate. Perhaps this is why President Trump and his economic advisers have so quickly dialed down their rhetoric about trade wars: They have realized both that there is no victory in a trade war, and that it is certainly not worth the price of stoking a real war—which would nullify any “victory” in a trade war. The future of global stability thus hinges on whether great powers think and act in terms of sovereignty or supply chains, war or tug-of-war.

Those who believe globalization can be switched off so quickly thus also inadvertently make the logic of war more likely. They also commit a more fundamental fallacy in believing that cyclical conflict is the “natural” order of things, and that globalization’s waves are merely permitted in the intervals between major world wars. But sixty thousand years of human history, from the crawling migration of homo sapiens out of Africa to today’s millisecond communications across the planet via fiber-optic Internet cables, tell us precisely the opposite story: globalization inexorably widens and deepens, while global military conflict is an infrequent and preventable occurrence. Warfare is an event; global network building is the deeper and more permanent process. Globalization always finds a way.

A hyperconnected multipolar world is uncharted territory, but the paradox of tug-of-war may be that the longer it goes on, the more everyone wins. The past seventy years of global economic integration and trade expansion have been the most prosperous in humanity’s history, with billions lifted out of poverty and modernization accelerating worldwide. For forty years, China has cleverly required that Western multinationals train its workers, transfer technology and effectively sponsor what have become China’s new industrial powerhouse companies that compete with them worldwide. Along the way, however, China has recycled its surpluses into U.S. Treasuries, keeping America’s interest rates low and become the revenue engine for much of the Fortune 500. Win-win.

To keep the system working for everyone, what America needs is less focus on U.S.-China military rivalry for the sake of maintaining primacy and more on smart tug-of-war strategy. One of the best decisions has already been made. In December 2015, the U.S. Congress lifted the forty-year-long embargo on exporting America’s oil and gas reserves. American LNG is now providing a lifeline to the Baltic states to ward off Russian cutoffs of their energy supply, while American oil tankers are crossing the Pacific to the country’s largest customer: China. Just five years ago, a U.S.-China conflict over Arabian energy resources was a popular superpower conflict scenario. Today it has been replaced by the peaceful logic of supply and demand.

In the reverse direction, Chinese foreign investment into the United States is also surging, including Chinese home buyers from high-end pockets like Silicon Valley to distressed communities across the South, as well as commercial real estate and other sectors. With Congress unwilling to finance America’s much-needed, multitrillion-dollar infrastructural overhaul, Washington should be devising bond instruments for Chinese capital to fund the repair of America’s ailing airports, roads and bridges—to bring them up to Chinese standards.

Only one decile of the world population—lower-middle-class citizens of North America and parts of Europe—has not seen incomes grow stratospherically in the past thirty years. As human beings and economic agents, they too have still been winners from globalization bringing affordable goods into their homes. The lack of sufficient Trade Adjustment Assistance for American workers is Washington’s fault, not China’s. Scapegoating populism has indeed caused wars in the past, but war today wouldn’t achieve President Trump’s goals to bring back jobs or double exports. Given America’s track record of wars in the past two decades, perhaps it should devote more resources to tug-of-war instead—just as the rest of the world has done. Preparation for war is always necessary, but smartly waging tug-of-war is an existential daily priority.