Tiananmen Option: Would China Use Military Force in Hong Kong? 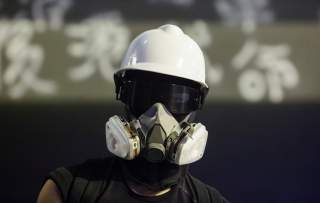 Will Xi Jinping deploy the People’s Liberation Army to suppress the peaceful protests in Hong Kong, or will Beijing opt for a more conciliatory approach to quieting the unrest that has rocked the city for the past several months? So far, China has refrained from pursuing the so-called “Tiananmen option” in Hong Kong, instead relying on local police and criminal gangs to mete out nonlethal violence against the city’s pro-democracy protesters. But if the movement for political reform in Hong Kong continues to gather strength—or if it shows signs of spreading to the Chinese mainland—then it might be difficult for China’s panicked leaders to resist using overwhelming force to crush the dissention.

The dispute between Hong Kong’s protesters and the Hong Kong Government will be difficult to resolve through dialogue alone. This year’s unrest began as a reaction against Chief Executive Carrie Lam’s proposal for an extradition law between Hong Kong and the mainland, which would have made it possible for the Hong Kong authorities to send people accused of crimes to face trial in regular Chinese courts. If enacted, such a law would have undermined Hong Kong’s judicial independence and had a chilling effect on free speech, with activists in the territory always under threat of extradition to the mainland on politically motivated charges.

However, the protesters’ demands are now much more expansive than just the withdrawal of the extradition bill. Among other things, they are calling for an independent investigation into police brutality, the release of political prisoners, and the introduction of fully democratic elections in Hong Kong.

Lam and other Hong Kong leaders refuse to grant these demands. And even if they were inclined to appease the protesters, the full democratization of Hong Kong is obviously anathema to the Chinese Communist Party (CCP) regime based in Beijing, which is becoming even less tolerant of political pluralism under the authoritarian leadership of President Xi. In a sense, the stakes are essentially a zero-sum game: either Hong Kong is allowed to proceed along a path to full democratization, free from the political influence of the communist mainland, or else the city’s inhabitants must accept their ultimate fate of becoming just another Chinese city.

Can a violent crackdown be avoided? The answer, thankfully, is yes. Most obviously, the protests could simply fizzle out. After all, it is difficult to sustain a mass movement on the scale presently being witnessed in Hong Kong, especially in the face of concerted official opposition. At some point, the protesters’ will to continue fighting might evaporate, or else the protest’s leaders could opt to pursue less risky means of achieving long-term political reform. This is what the CCP is hoping for.

Alternatively, the Hong Kong Government could be pressured to make concessions. It is not unthinkable, for example, that Xi could lean on Lam (or her successor, if she is pushed out of office) to permanently withdraw the extradition bill as a way to buy off a critical mass of dissenters. Something similar happened in 2003, when public demonstrations forced the Legislative Council of Hong Kong to withdraw a controversial bill that would have made it easier to punish Hong Kongers for “treason, secession, sedition, subversion against the Central People’s Government.”

If neither side backs down, however, then a Tiananmen-style solution to the standoff becomes increasingly likely. The deployment of the People’s Liberation Army would obviously be devastating for Hong Kong, almost certainly resulting in mass injuries, fatalities and arrests. A violent crackdown would also be a bad outcome for Xi’s regime. It would wreck the Hong Kong economy, alienate the population, and saddle Beijing with a decades-long task of political reconstruction and reconciliation—not to mention ruining Xi’s international image.

But while deeply unattractive to China’s leaders, the Tiananmen option is far from the worst-case scenario from Beijing’s perspective. Preserving the territorial integrity of the People’s Republic, upholding the CCP’s political authority, and avoiding widespread unrest in mainland China are all considerations that President Xi values more highly than the fate of Hong Kong. If push came to shove, then overwhelming force might yet be viewed as necessary to avoid imperiling the regime as a whole.

It should not be forgotten that the Tiananmen Massacre was a long-term political success for the CCP. In the summer of 1989, the upper echelons of the Chinese leadership had been split on whether to use violence to disperse the throngs of pro-reform campaigners that had gathered in Tiananmen Square to remonstrate with their leaders. But once military action had been ordered, Communist Party grandees quickly united behind the plan. The protests were crushed within days, with up to ten thousand civilians being killed—a vicious response that placed the Communist Party’s political authority beyond doubt for a generation to come.

Despite the bloodshed (or perhaps because of it), China’s communist system survived 1989. The same cannot be said of the communist regimes of Central and Eastern Europe, which opted against the violent suppression of pro-democracy movements during the last months of that year. Soviet leader Mikhail Gorbachev made clear that Moscow would tolerate (and even encourage) political reform made in response to popular demands for change, a policy that was lauded in the West as far more enlightened than the butchery on display in Beijing. Yet thirty years later, China is still a communist country and has risen to become a great power. By contrast, the Soviet Union no longer exists and most of Eastern Europe is part of NATO.

From this view, Tiananmen worked. And what is more, the CCP regime managed to carry out the Tiananmen crackdown without incurring much in the way of long-term political costs. Domestically, Beijing has relentlessly suppressed discussion of the Tiananmen Massacre for over thirty years, effectively preventing those killed from becoming martyrs to a lasting popular cause. Overseas, the Tiananmen crisis drew stinging rebukes from foreign governments, media organizations and international nongovernmental organizations. Yet the opprobrium was relatively short-lived, and China became an increasingly important and active member of the international community over the course of the 1990s.

If Xi orders a crackdown in Hong Kong, then he will have to do so in the full glare of the international community. He will be hated for it. But there is no reason to believe that China could not ride out the storm again. And while the advent of social media means that it would be far more difficult today for Beijing to suppress information about the slaughter of innocent civilians than it was in 1989, it is also true that the CCP has become more sophisticated in how it controls the media consumption of mainland Chinese, many of whom are already predisposed to view Hong Kongers with dislike and distrust.

Of course, it is far from inevitable that Beijing will use tanks to suppress the protesters in Hong Kong. But at the end of the day, CCP decisionmakers value the security of the People’s Republic and their own political survival above all else. If the situation in Hong Kong ends up metastasizing into something that threatens these core concerns of the leadership in Beijing, then nobody should bet against a Tiananmen-style “solution” to the crisis. Worse still, there is every chance that China would get away with it.