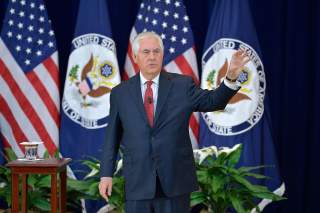 Secretary of State Rex Tillerson’s May 3 address to State Department employees is perhaps the most important and comprehensive articulation of the Trump administration’s foreign policy approach since candidate Donald Trump’s April 2016 foreign policy address (to a group invited by The National Interest). For the first time, a senior administration official has outlined a foreign policy concept that delivers on the vision that President Trump promised during the campaign. Secretary Tillerson appeared confident, articulate and thoughtful in explaining what “America first” means for U.S. foreign policy, in assessing key regional priorities, and in connecting both to the State Department and its mission. If he and the administration can succeed in executing policies on this basis, the Trump administration will successfully reorient U.S. foreign policy to meet the challenges of the 21st century. Tillerson’s remarks are a serious and encouraging start to the process and he and the aides behind it, perhaps including State’s policy planning chief Brian Hook (one of few senior political appointees in the building), deserve praise for their efforts.

Secretary Tillerson began by explaining that he and President Trump see America’s “partnerships and alliances” as having become “a little bit out of balance” during the post-Cold War era. This phrasing and Tillerson’s subsequent explanation in his remarks made clear that he was referring to America’s dealings with its “trading partners”—especially “emerging economies”—and not only what he described as the “notional obligations” of America’s NATO allies to increase their defense spending. He further stressed that restoring balance in these relationships would require “engagement with others” and thus clarified that it would not be a form of isolation or retreat as some fear.

A second major focus in his remarks, which has since received considerable attention, was Secretary Tillerson’s effort to answer the question “how do we represent our values?” He started with the unambiguous statement that “guiding all of our foreign policy actions are our fundamental values” which “never change” and are “on our shoulder wherever we go.” At the same time, however, Tillerson acknowledged the reality that “if you condition our national security efforts on someone adopting our values, we probably can’t achieve our national security goals or our national security interests.” He was then more specific, adding that “in some circumstances, we should and do condition our policy engagements on people adopting certain actions as to how they treat people. They should. We should demand that. But,” he continued, “that doesn’t mean that’s the case in every situation. And so we really have to understand, in each country of each region of the world that we’re dealing with, what are our national security interests, what are our economic prosperity interests, and then as we can advocate and advance our values.”

This is a practical and realistic approach to one of the most difficult problems in U.S. foreign policy, reconciling our interests and our values. It states explicitly that America’s fundamental values should guide U.S. policy while making clear that Washington cannot condition U.S. national security upon others’ adoption of American standards and practices in governance and human rights on a timeline sufficiently rapid to satisfy U.S. political cycles. As Tillerson explained, “I hear that from government leaders all over the world: You just can’t demand that of us, we can’t move that quickly, we can’t adapt that quickly.” In some cases, this retort may reflect genuine intent to change behavior in the face of economic, social or political obstacles. In others, of course, it is almost surely a deflection. Yet America cannot afford that either should prevent U.S. officials from working with foreign governments to protect vital national interests. And no small number of the governments from which we most need cooperation are precisely those that fall far short in reflecting American values.

Still, there are predictable critics of this approach, especially among those who have opposed President Trump from the outset and who reject any scrutiny of the costs and consequences of their preferred interventionist course. Thus neo-conservative professor Eliot Cohen, an organizer of anti-Trump open letters, rather disingenuously seeks to take Tillerson’s calibrated approach to its extreme, arguing that “since there are always some kind of security and economic interests in play, America cannot stand for much in the world beyond a kind of national selfishness, less intense perhaps but essentially no different than that of China or Russia.” This is preposterous and directly contradicts both Tillerson’s clear statement about the guiding role of American values in U.S. policy as well as his more nuanced and logically unimpeachable acknowledgement that Washington will be in a better position to insist upon American values “in some circumstances” than in others.

Bizarrely, Cohen also tries to marshal the Declaration of Independence, the Constitution, the Gettysburg Address, and the Bill of Rights as arguments against Tillerson’s approach. This is intellectually dishonest. The first sentence of the Constitution states: “We the People of the United States, in order to form a more perfect union, establish justice, insure domestic tranquility, provide for the common defense, promote the general welfare, and secure the blessings of liberty to ourselves and our posterity, do ordain and establish this Constitution for the United States of America.” This statement—the preamble to the Constitution—explicitly puts America first. It describes the purpose of the Constitution, and of the U.S. government, as serving “ourselves and our posterity.” That means American citizens, not the citizens of foreign countries.

In citing the Declaration of Independence, Cohen perhaps has in mind its historic and inspirational insistence that “we hold these truths to be self-evident, that all men are created equal, that they are endowed by their creator with certain unalienable rights, that among these are life, liberty and the pursuit of happiness.” But there are two other self-evident truths. One is “that to secure these rights, governments are instituted among men, deriving their just powers from the consent of the governed”—an obvious failing in many authoritarian regimes. The other is “that whenever any form of government becomes destructive of these ends, it is the right of the people to alter or to abolish it, and to institute new government, laying its foundation on such principles and organizing its powers in such form, as to them shall seem most likely to effect their safety and happiness.” This is an assertion of the right to self-determination among the wronged, not a call for a global effort to apply America’s emerging principles. Indeed, one of George Washington’s most consequential foreign policy decisions was to avoid intervening in the French Revolution to support efforts to overthrow the autocrat King Louis XVI and establish a democracy.

Cohen is equally off-target in trying to use former Secretary of State Dean Acheson against his modern-day successor. In his book Present at the Creation, Acheson took pride in a policy that “placed the strategic approach to practicable objectives, concretely and realistically conceived, ahead of generalizations, even those wearing the garb of idealism.” NSC-68, a founding document of America’s Cold War strategy that Acheson had an important role in formulating as Secretary of State, is even more specific in asserting that “in relations between nations, the prime reliance of the free society is on the strength and appeal of its idea, and it feels no compulsion sooner or later to bring all societies into conformity with it.” Dean Acheson was no crusader and, like most of the founders almost two hundred years before him, prioritized America’s value as an example, not an enforcer, of moral principles of government. Ensuring that the United States provides a powerful example for others is among the President’s important responsibilities.

There are, in fact, sound reasons for the careful balance between interests and values that Secretary Tillerson describes. First, Tillerson is right that America cannot always afford to stake its security on the degree to which others are prepared to accommodate our values. Sometimes, our security needs may be too great. In other cases, the values Washington advocates internationally may be politically contested within the United States and therefore subject to whipsaw reversals when conservatives or progressives assume power. Sacrificing U.S. security interests to advance a value that could take a generation or more to instill when the next administration or Congress will likely abandon it in an early executive order, law, or administrative directive makes little sense.

Second, as many have argued, because Washington can’t apply its principles universally, it inherently applies them selectively. Foreign leaders, American and foreign journalists, and others ask U.S. officials to justify the differences between cases. If officials admit that America applies its principles selectively after asserting their universality, they admit to hypocrisy. The alternative is to obscure or defend indefensible conduct, which tacitly but openly acknowledges hypocrisy at a greater moral cost. Secretary Tillerson’s position avoids this problem by stipulating from the beginning that the U.S. government will be selective in pressing others to adopt American values.

Third, and perhaps most important, Americans are far more likely to forgive their leaders for their perceived lapses in promoting values than their perceived failures to protect national interests. Polling by organizations like the Chicago Council on Global Affairs regularly demonstrates that Americans give greater priority to terrorism, nuclear proliferation, and jobs in U.S. foreign policy than they assign to democracy or human rights. This doesn’t mean that Americans don’t think human rights are important or that they don’t want their leaders to conduct a moral foreign policy that asserts American values. What it does mean is that when they are forced to choose, they put security and economic objectives first.