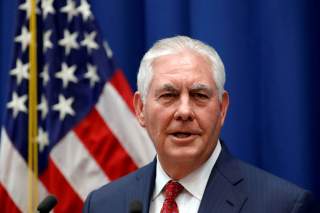 The National Interest reported yesterday that the State Department and the White House are not on the same page with regards to a report in The American Conservative by veteran defense reporter Mark Perry that alleges that White House Senior Advisor Jared Kushner, the president’s son-in-law, likely greenlit controversial Saudi Arabian actions in the Middle East—and that he did so without looping in Secretary of State Rex Tillerson.

It was against such a backdrop of intrigue—combined with a torrent of Tillerson-hostile press coverage alleging the former Exxon CEO is gutting the diplomatic corps (including a prominent op-ed in The New York Times Tuesday morning by former Ambassadors Nicholas Burns and Ryan Crocker)—that the secretary of State made a much-anticipated address to the Wilson Center Tuesday morning. Before his address, it had already been a rocky start to the week. News broke Monday of the resignation of the chief, Maliz Beams, of his much-touted—and much-maligned—State Department “redesign”; she had only been on the job three months.

In prepared remarks, the secretary hit most of the key points of official U.S. policy on Europe and Eurasia. On Russia, Moscow “can continue to isolate and impoverish itself by sowing disorder abroad and impeding liberty at home, or it can it become a force that will advance of Russians and the stability of Eurasia,” he said.

More revelatory was the Q and A.

A Forthright Defense of A "Process"-Led Approach

Tillerson “lives and dies” by process, a former senior ExxonMobil executive told me earlier this year. His redesign of the State Department has been much-maligned. “Tillerson’s fixation (with) downsizing State dept reflects 1) opposition to a leading U.S. world role? 2) disdain for diplomacy? 3) arrogance that expertise not needed?” tweeted Council on Foreign Relations President Richard Haass over the weekend. “Hope there is a fourth benign explanation, as all of these truly worrisome and misguided.”

Tillerson attempted to provide such an explanation.

On admin-led budget cuts to his own department: “Part of this was just a reality-check. ‘Can we really keep this up?’” A leaner budget is a part of “an expectation that we’re going to have success in some of these conflict areas in getting these conflicts resolved and moving to different place in terms of the kind of support we have to give them.”

On the “redesign”: “It would have been really easy to come in one day one and do a reorg—a ‘reorg,’ when I use that word is moving the boxes around on the org chart. When I showed up in the State Department, I was stunned when I got the organization chart out . . . We mainly undertook an examination of what’s a reasonable way to run the place. And that isn’t it” said Tillerson.

“Having run a large, global organization,” the secretary continued. “I’ve been through three major reorganizations in my history, and I actually enjoy doing it.”

“There is no hollowing out,” Tillerson declared emphatically. “These numbers that people are throwing around are just false. They’re wrong.” “It’s all directed at allowing the people at the State Department to get their work done more effectively, and more efficiently, and have a much more satisfying career.”

“Let me tell you that message will resonate around the world,” commented moderator Jane Harman, Wilson Center president and former California Congresswoman. “A lot of people wanted to hear that.”

Tillerson’s focus as a manager clearly contrasts heavily with his most prominent potential rival and successor, CIA Director Mike Pompeo. Allies of former White House strategist Steve Bannon—as well as many neoconservative critics of the president—are big fans of the director. In more ways than one, the contrast between Pompeo and Tillerson couldn’t be starker.

Budget cuts? “A good strategy without resources is just wishful thinking,” Pompeo told an audience at the Foundation for the Defense of Democracies, a powerful policy force within the administration, in October. Pompeo also blasted the “modernization effort” undertaken by his predecessor, John Brennan, and downplayed a need to focus on internal reform, even namechecking practices at “the finest companies in the world.”

“I think less about org charts than I do about mission, and I’ve told our team this. I’ve asked everyone to say, ‘Do not print the org chart out!’” Pompeo said. “I mean look, the finest companies in the world are restructuring their team every day. . . . Start with mission, not with org chart. The organization and the team will fill itself out if everyone’s focused on the mission.”

Some in Trump’s orbit are whispering Tillerson could be out as soon as January. Harman asked Tillerson—who has been on the job less than ten months—what his “legacy” will be.

Then again, he’s been declared a dead man before. Many thought he would resign following NBC reporting this year—another claims he’s also declined to deny—that he once called the president a “moron.” For many foreign policy realists, Tillerson has become an unlikely saving grace, and a Secretary Pompeo or Nikki Haley or John Bolton would be an unwelcome shift. Could it be that far from being doomed, Tillerson is in fact just getting started?