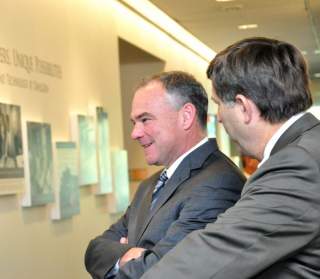 Hillary Clinton’s choice of Tim Kaine as her running mate may not have reversed her overwhelming unpopularity with the American public. But it underscored the contrast between her professionalism and the rank amateurism that Donald Trump displayed throughout the Republican convention and its aftermath. Clinton could have pandered to the Democratic Left, much as Trump has pandered to the extremist Right. She didn’t. Instead, she chose a man whose public-spiritedness and essential decency is so widely recognized and appreciated that many of his Republican colleagues in the Senate were lining up to congratulate him.

Tim Kaine’s greatest strength is that he is not an ideologue. He is a Democratic realist. He is an internationalist who recognizes the importance of America’s unique position in the world, and a cautious policymaker who advances his progressive agenda through compromise both within his party and across party lines. Add to that his pleasant demeanor—if he was a successful missionary in his youth it should come as no surprise, and his keen intelligence, and it is clear that Clinton made the wisest possible choice for the ticket that she will lead.

Kaine is no conservative. He has earned a 100 percent rating from Planned Parenthood; 100 percent from several environmental groups; and 76 percent from the American Civil Liberties Union. On the other hand, the American Conservative Union rated him at zero, as did the National Right to Life Committee and Americans for Prosperity. Yet he also received an 86 percent rating from the National Association of Police Organizations and was one of the small bipartisan group of Senators who sought to limit terrorists’ access to firearms. In other words, he is not easily pigeon-holed.

It is in the realm of international security, however, that Kaine’s instincts toward what might be termed “progressive realism” are most on display. He has pushed hard for a Congressional Authorization for the Use of Military Force in Syria and has not hesitated to criticize the Obama Administration for its seriously maladroit Syria policy. Moreover, Kaine is a conscientious advocate of the notion that politics ends at the water’s edge. At a time when this long-held principle, which enabled the United States to mount a successful bipartisan effort to win the Cold War, has fallen into severe disrepair, Kaine has demonstrated to foreign officials, analysts and pundits that American politicians can still pull together when national-security interests are at issue.

Kaine’s bipartisan instincts on national security have led him to play a leading role, together with John McCain, at the Halifax National Security Forum. This annual meeting supported by the Canadian Government receives far less attention than other such gatherings. In fact, it hosts dozens of defense ministers from around the world, but only those from democratic states—much to the chagrin of defense ministers from America’s authoritarian allies, who also would like to attend. By literally standing alongside McCain on the Halifax stage, and avoiding any public disagreements with the longtime Senator from Arizona, Kaine has, for the past few years, broadcast a message of bipartisan support for America’s allies and friends. This message is especially critical at present, as Donald Trump has become ever more explicit about pulling America out of NATO and rupturing other long-standing alliances and friendships.

Representing a state with a major military presence and a large veteran population, Kaine has always been exceedingly sensitive to national-security needs. If he weren’t, he would not have won every election in which he has run for office. Virginia may be a swing state, but not, it seems, when Kaine has been on the ticket.

Unlike Hillary Clinton, Kaine has never spoken of vast right-wing conspiracies. He neither acts nor thinks in such divisive terms. Because he practices the art of the politically possible, he is certain to be a moderating influence on the more ideologically-inclined Clinton. In particular, he is likely to advise Clinton to avoid embittering her relations with Republicans and moderate Democrats in Congress by naming hard-line liberals to the Supreme Court. If she is to win the election, and, more importantly, if she is to govern more effectively than the present incumbent were she to become president, she will have Tim Kaine to thank—assuming she has the wit and the wisdom to listen to his counsel.

Image: “Dr. Robert Gates, right, vice president of the Dahlgren Heritage Foundation, discusses some of the historic work accomplished at Dahlgren with U.S. Senator Tim Kaine at the University of Mary Washington Dahlgren Campus. Kaine's tour of the campus was followed by a brief visit on nearby Naval Support Facility Dahlgren, where he was briefed on various mission activities by the Aegis Training and Readiness Center, Joint Warfare Analysis Center and Naval Surface Warfare Center Dahlgren Division. (U.S. Navy photo by Andrew Revelos/Released)”.