Time to Act on Ukraine 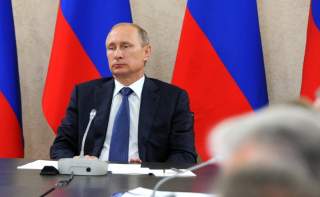 The Ukraine crisis, though temporarily out of the headlines, is at a critical stage. There is no better opportunity than now through the next several months to forge a deal with Russia advantageous to American interests. The Europeans may very well not extend sanctions after the first half of 2016, even as Russia is now in a near-disastrous economic position. The confluence of the two trends calls for dramatic diplomatic action. This is not a deal for a deal's sake, but a way to get Russia effectively out of eastern Ukraine.

The constraining factor for the United States in Ukraine has always been Europe. Europe, principally (though not entirely) because of its appetite for Russian energy, has throughout the Ukraine crisis demonstrated less appetite than the United States for a harsh policy toward Moscow. This is especially true of the Germans, who historically have looked both east and west. And now that Europe is reeling under a massive refugee deluge, coupled with its own economic crisis that after half-a-decade shows few pivotal signs of improvement, the influential European business community craves the lifting of sanctions with Russia as a means to spur commerce. EU-Russian trade was down nearly 30 per cent in the first half of this year, compared to the same period in 2014, and the European Commission has estimated that Russia sanctions shaved off a third of a point of the EU’s tepid GDP last year and this year. Consequently, some Europeans rationalize that the current ceasefire in Eastern Ukraine and the cancellation of Russian-backed separatist elections there justifies a discontinuation of the sanctions.

Europe, in other words, is losing whatever nerve it had. This comes while opinion toward Russia, especially because of its intervention in Syria, is hardening in the United States.

At the same time, however, partly due to low energy prices and the sanctions that lock Russia out of European and U. S. capital markets, the Russian economy is imploding. Growth in Russia will actually contract by as much as four per cent this year. The credit crunch will worsen, demand for both consumer and industrial goods will shrink, and progress on mega energy projects will continue to slow in this weak oil market. Except for the Europeans, who may extend sanctions for only the first or second quarter of 2016, there is no one to throw Russia a life-line. Chinese financiers, who many assumed would have been the natural partners for Russia, have been restrained in their lending to Russian companies. China, to put it mildly, has its own economic problems, with growth shrinking from double-digits a few years ago to an official 6.9 per cent, with a real figure that is no doubt lower.

Russian business elites, tied inextricably to the West through investors, shareholders, and stock market listings, now see President Vladimir Putin's greatest anxiety as the state of the Russian economy.  As a matter of political survival, he is accelerating new trade and tax measures to grab more revenue for the state and stem the alarming outpouring of deposits and investments.  Putin is not curbing defense spending or the social spending critical to his popularity, so relief from sanctions is now crucial to his short-term strategy.

Therefore, crafting a diplomatic approach that offers measurable sanctions relief in return for measurable Russian concessions on Ukraine, could keep Europeans on the same page as the United States, while also providing a better context for negotiating with Russia over Syria. Like it or not, the Russians are in Syria, even as the Obama Administration is not about to actively work to topple Syrian President Bashar al-Assad. Defeating ISIS takes priority over that.

As we've said, the danger of refusing to explore a deal with the Russians over Ukraine may provide Putin with just the opening he needs to split Europe off from the United States, given how desperate both Russia and some in Europe are for a deal over sanctions. Syria works to Putin's advantage in this regard: in the United States, the Russian military campaign there is seen as toppling whatever remained of an American-order in the Middle East going back to Henry Kissinger's shuttle diplomacy in the mid-1970s. It thus has an entirely negative connotation. But among some Europeans, because of Russia's attempts to forge a diplomatic settlement in Syria, even as it's military is involved in the fighting there, Putin is seen as perhaps the last best hope to quell a crisis that is sending so many refugees to Europe.

To be sure, the Obama Administration has pursued a confusing, ineffectual strategy in the Levant and has floundered in the effort to project both sufficient power and a sense of mission in Central and Eastern Europe. But this has created a situation where the best way out may be a partial deal over Ukraine that happens before Europe deserts us. A deal should involve material and internationally recognized Russian progress toward its Minsk commitments, in exchange for relief from some financial sanctions.

In such a deal, internationally validated local elections must occur in Eastern Ukraine, Russia must remove arms and troops from Eastern Ukraine, and it must return hostages and detainees. Upon successfully meeting these benchmarks, the EU and the United States should temporarily waive some financial market sanctions, expanding the number of days of maturity for available debt instruments. This will allow for some more Russian debt servicing or borrowing in Western markets. If Russia allows Ukraine to gain full control of its Eastern border within six months of meeting these benchmarks, sanctions should be fully waived. If Russia falls short of this deadline or reverses course, the United States and the EU should immediately re-impose all sanctions that were waived and return to the current status quo. They could also contemplate further, financial sanctions measures.

This will not be an easy deal for either side, and it will certainly relegate Crimea to the realm of prolonged, frozen conflict.  However it will offer a crucial economic opening to Russian companies and accomplish key Western benchmarks toward restoring security in Ukraine.

Such a partial deal must be accompanied by more robust U.S. and NATO military deployments from the Baltic States south to Bulgaria.  And it must also include greater U.S. and EU economic support and technical assistance to Ukraine, and other countries in Russia’s near abroad to bolster them against coercive Russian political or commodity supply arrangements.

As distasteful as it may be to contemplate a partial deal with Russia over Ukraine, unraveling transatlantic disunity is worse. Euro-American unity is fundamental to addressing Syria, ISIS, and the threat of foreign fighters in our homelands; it is also the bedrock of a liberal world order. Now is the time to show pragmatic leadership to compel a deal with Russia, demonstrate powerful American leadership, and keep Europe in our corner.

Robert D. Kaplan and Elizabeth Rosenberg are senior fellows at the Center for a New American Security. Kaplan is the author of "In Europe's Shadow: Two Cold Wars and a Thirty-Year Journey Through Romania and Beyond." Rosenberg was formerly a Senior Advisor at the U.S. Treasury Department.