Time for America to Act on North Korea, Alone If Necessary 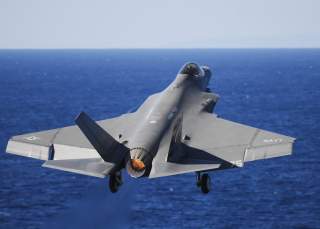 The sanctions on Iran prior to the 2015 nuclear agreement—formally known as the Joint Comprehensive Plan of Action (JCPOA)—were considerably tougher. The UN banned Iran from participating in any activities related to ballistic missiles; imposed travel bans on individuals involved with the program; froze the funds and assets of the Iranian Revolutionary Guard and Islamic Republic of Iran Shipping Lines and recommended that states inspect Iranian cargo; prohibited the servicing of Iranian vessels involved in prohibited activities; prevented the provision of financial services used for sensitive nuclear activities, closely watched Iranian individuals and entities when dealing with them; prohibited the opening of Iranian banks on their territory; prevented Iranian banks from entering into relationship with their banks if it might contribute to the nuclear program, and prevented financial institutions operating in their territory from opening offices and accounts in Iran. Many observers believe that the financial sanctions in particular were what brought Iran to the negotiating table in the first place. Many of the sanctions, especially regarding ballistic missiles, continue to remain in force.

Initially, the Trump administration had proposed a reprise of several of types of the sanctions imposed on Iran prior to the implementation of the JCPOA. These include a complete ban on exporting petroleum and petroleum, products to North Korea; a freeze on Kim Jong-un’s overseas assets; a travel ban on Kim; and sanctions against Pyongyang’s military and its airlines. Why did the Security Council not adopt the American position and why did Washington acquiesce to a much weaker resolution? Simply because Moscow and Beijing would never have approved anything stronger, and Washington, with London and Paris in tow, elected to appease the Russians and the Chinese in the belief that half a loaf was better than none at all. Given North Korea’s record of consistently flouting prior Security Council resolutions, however, half a loaf is in fact no loaf. The new sanctions will not stop Kim’s rush toward an operational strategic nuclear program any more than the old ones did.

Moscow and Beijing have little interest in imposing tougher sanctions, and reluctantly went along with the watered down Security Council resolution. Vladimir Putin made his position clear when he was recently in Seoul: “it is impossible to resolve the problem of the Korean Peninsula only by sanctions and pressure.” Both Russia and China have called for a “dialogue” with Pyongyang, with a view to getting the United States and South Korea to terminate their war games on the peninsula in exchange for a halt to the North Korean nuclear program. Ultimately, Moscow and Beijing share Pyongyang’s desire to rid the Korean Peninsula of the American presence; ending war games would be a first step toward that objective. Indeed, it would also be a first step toward Beijing’s greater long-term goal of completely ridding the Western Pacific of America’s military presence and political and economic influence.

It is time for Washington to reconsider its willingness to mollify Russia and China in order to achieve crumbs at the Security Council. The United States working in concert with a small number of allies, notably Britain and the EU, could impose crippling financial sanctions on North Korea; it could also extend sanctions to third countries selling petroleum to the Pyongyang government. Kim Jong-un seems to be daring Donald Trump to go to war and nothing that has been done so far has altered his behavior. If a war that no one else wants is to be avoided, then it is imperative that, in the absence of an international consensus, the United States take the strongest possible measures to avoid it.

President Trump has recently demonstrated that he can indeed work with a bipartisan majority in the Congress; he should join hands with that majority to impose the very sanctions his administration proposed, and failed to obtain, at the United Nations. Moscow will no doubt react negatively, and Beijing even more harshly. Nevertheless, Washington cannot simply bide its time hoping that a maniacal North Korean leadership that threatens to destroy American territory will come to its senses. It will not; and only a determined American response can force it to recognize that it has no option but to do so.