Time for America to Woo Back Israel 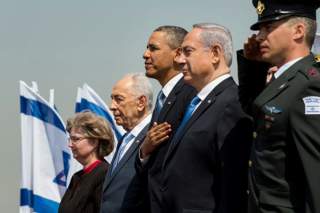 The United States is currently facing an alliance conundrum in the Middle East. As the Obama administration struggles to maintain positive ties with its Arab allies in the region, one country is securing large strategic gains: France, a NATO ally.

This became more evident with the Saudi king’s cancelled participation in the Gulf Cooperation Council (GCC) meeting in Camp David last month, which took away some of the steam from the meeting, and intensified concerns about U.S. success in the Middle East. In recent months, however, France has grown surprisingly close to the GCC, and is currently an Arab favorite in the region. In the backdrop of this complex alliance quagmire, America is probably better off wooing back its traditional ally, Israel, despite recent sparring between the two over Iran’s nuclear program.

Before the Camp David meeting, France was invited by the GCC itself to attend their consultative summit in Saudi Arabia, which made French President François Hollande the first Western head of state to attend the organization’s meeting since 1981. Over the past few months, Paris and Riyadh have grown closer as French Middle East policy has demonstrated increasing support for the Saudi position in the regional crisis. Not only has Hollande been vocal in his criticism of the Syrian regime of Bashar al-Assad, and supportive of Saudi military action in Yemen, he has also taken a hardline approach in the negotiations on Iran’s nuclear program. By contrast, Washington’s concerns regarding Saudi air raids in Yemen, a less proactive approach against Bashar al-Assad, and endeavors to rapidly conclude negotiations on Iran’s nuclear program, have upset the Saudis and other Arab allies.

The French position, by being antithetical to the American one, has not only made Paris a favorite of the Arab states but also opened up new commercial possibilities for France. Prior to its summit meeting with the GCC, Paris inked an agreement worth $ 7.1 billion to sell 24 Rafale fighter jets to Doha, and initiated discussions for twenty different projects with Riyadh worth millions of dollars in defense, civil nuclear energy, transport, and health, among others. The Franco-Qatari Rafale agreement is the third deal that Paris signed this year on the fighter jets, making it a record year for French defense sales — a welcome respite to the sluggishly recovering French economy.

Israeli Prime Minister Benjamin Netanyahu’s dispute with the White House, which became public when he addressed the U.S. Congress opposing an agreement, is probably a little less prickly now. The United States and Israel have too many overlapping strategic concerns in the region to be working apart, as was evident in the Israeli appreciation of America’s opposition to a nuclear weapons-free zone in the Middle East at the 2015 NPT Review Conference.

Moreover, the United States’ recent rejection of possibilities for a common defense treaty with the Gulf countries has put Israeli fears to rest that Washington would deepen its strategic relations with the Arab countries. This offers the United States and Israel a window of opportunity to improve their relationship, and come together to resolve their differences.

Further, even though France’s hardline position on Iran’s nuclear program had earlier earned generous praise from Israel, the current French courtship of the Arab states has been viewed with suspicion by Israel. More importantly, the possibility of a French proposal at United Nation Security Council calling for the creation of a Palestinian state has infuriated Israel, and worried Washington, thus further offering common grounds to mend U.S.-Israeli relations.

At a time when the Middle East is spiraling out of control with ISIS fast expanding, negotiations with Iran moving tediously, and old allies falling out, Washington cannot afford to lose any more ground in the region. The Obama administration would thus do well to woo back Israel. With a decline of its special relationships everywhere, America needs friends now like never before.