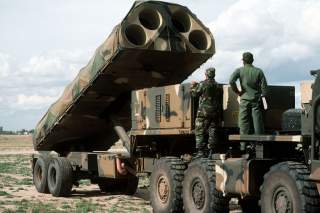 Should the United States develop its own land-based missile forces, even if doing so means adapting or abandoning the Intermediate-Range Nuclear Forces (INF) Treaty?

To sustain a strategy of forward defense in the face of China’s growing missile arsenal, Washington may need to consider options that would have seemed implausible just a few years ago, and that clearly remain controversial today. Of course, revising arms-control agreements and investing in new capabilities are major decisions. In his latest response to my previous articles, Matthew Hallex raises a number of operational, diplomatic and economic concerns, all of which merit serious consideration. Rather than repeating my earlier arguments, let me conclude this debate by highlighting three areas of disagreement.

First, Hallex notes that forward-based missile forces would not have the same degree of flexibility as other capabilities. Specifically, whereas missiles located in the first island chain would only have utility in East Asia, undersea warfare and long-range strike platforms have global reach. Yet this lack of flexibility can be a virtue, rather than a vice. Submarines and bombers are potent weapons, but their ability to deter adversaries and assure allies can be limited by the fact that they usually operate out of sight, are based far from the theater and may be drawn away when other contingencies arise. Moreover, it is precisely because missile forces would have a narrow mission that they could provide the United States with enhanced bargaining leverage. Although Washington is unlikely to trade away assets that have significant value across a range of scenarios, it might be willing to sacrifice assets that have a more limited role—for the right price.

Second, Hallex writes off land-based missile forces in part because the Army, which is the natural candidate to man and maintain them, would be unwilling to pursue this option at the expense of other capabilities that it believes are more relevant, from infantry units to heavy brigade combat teams. Indeed, the Army does seem reticent to embrace missions such as coastal defense and long-range strike, despite its long history with both. Yet Service preferences should not be allowed to trump higher-level strategic decisions, even though they can be barriers to change. In fact, developing new land-based missiles could help the Army make a stronger case for preserving its budget share as the United States rebalances its attention and resources toward the Asia-Pacific region.

Finally, Hallex calls attention to the potential expense of any new missile forces and argues that such an investment would be unwise, because China could produce missiles more cheaply than the United States. While this contention is plausible, the evidence for it is problematic. To illustrate his point, Hallex cites the cost of an unspecified Chinese air-launched cruise missile ($175,000) and the price of a U.S. Pershing II land-based ballistic missile ($18 million). But this is comparing apples to oranges. Cruise missiles tend to be much less expensive than ballistic missiles of comparable range, and air-launched weapons require expensive delivery platforms, which are not taken into account. The estimated cost of the Chinese missile also appears to be more than a decade and a half old, while the price tag of the Pershing II is adjusted for inflation, skewing the numbers even further. Setting these details aside, the key metric that needs to be debated is not how much a U.S. missile might cost relative to a Chinese missile, but rather how much a U.S. missile might cost relative to a potential target, along with any defensive measures that are taken to protect it.

Ultimately, designing, developing and deploying new military capabilities would inevitably require making certain trade-offs and accepting some risks. But it could also have significant payoffs. Hopefully this debate has shed light on both sides of the ledger.

Evan Braden Montgomery is a Senior Fellow at the Center for Strategic and Budgetary Assessments. Follow him on Twitter: @evanbmontgomery.