Time for an Anwar Sadat Moment in the Middle East 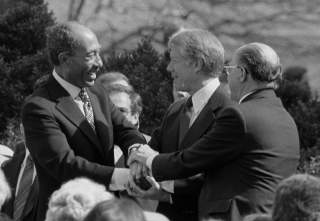 As Israel launched a ground incursion into the Gaza Strip, diplomats across the globe redoubled efforts to restore calm. Jordan called for an emergency meeting of the United Nations Security Council. Egypt and Qatar sought to broker a truce. On July 16, President Obama embraced “diplomatic efforts to restore the cease-fire”, and the following day, Secretary of State John Kerry cancelled an appearance at a Washington synagogue in order to consult with his international counterparts about the growing crisis. With violence flaring and diplomats scrambling, it’s déjà vu all over again in the Middle East. Operation Protective Edge has simply become the sequel to 2008-2009’s Operation Cast Lead or, for that matter, the 2006 Israel-Hezbollah war.

Albert Einstein quipped that insanity is undertaking the same action repeatedly but expecting a different result each time. By that definition, there’s a lot of craziness in Foggy Bottom and Turtle Bay. If the goal is peace between Israelis and Palestinians, perhaps it is time to dispense with conventional wisdom and formulas of the past and instead reconsider what might actually work.

Peace in the Middle East is possible, but victory must precede compromise. It has been almost thirty-seven years since Egyptian President Anwar Sadat broke decades of enmity and visited Jerusalem. His trip and speech to the Knesset, Israel’s parliament, inaugurated a diplomatic process which culminated in peace between Israel and Egypt, the Arab world’s most populous country, and left Sadat and Israeli premier Menachem Begin both Nobel Peace Prize laureates. What diplomats and journalists often forget, however, is Sadat chose peace only after he tried to eliminate Israel through war. It was only when Israel roundly defeated him that he recognized he could not achieve his aims militarily, and peace was his best option. Alas, that is a conclusion that international diplomacy too often undercuts by throwing lifelines to groups that make disastrous decisions. The path to peace involves paying the price for war.

Nor is tolerance always a virtue. The Obama administration prided itself on its open-mindedness when it took outreach to the Muslim Brotherhood to unprecedented levels. Despite his rhetoric, however, Muhammad Morsi, Egypt’s first democratically elected president, was no democrat, nor was he interested in peace. Rather, he was an ideologue who unabashedly supported Hamas. Many of the more-sophisticated Iranian-manufactured missiles, which now stock Hamas’ arsenal, are the legacy of his yearlong rule and his willingness to look the other way at smuggling into Gaza. Never should diplomats lose sight of the ball when ideologues play diplomatic three-card Monte, hiding their true intent behind a mirage of moderation. Both the Syrian regime’s and opposition’s use of chemical weapons, as well as Hamas’ use of its missiles, suggest that rogues will not sit on the capabilities they acquire.

The basic logic of Western diplomacy is also flawed. There should be no even playing field. Neutrality simply encourages all sides to stake out more extreme positions with the hope that diplomats seeking to split the difference will offer them more. Too often diplomats also assume that grievance motivates terrorism. It may be comforting for the State Department to think occupation, poverty or lack of opportunity lies at the heart of the violence because then concessions or incentives can eliminate the terror. The reality, however, is that much Islamist terror—whether that of Hamas, Hezbollah, Al Qaeda or the Islamic State—is rooted more in ideology than grievance. The 9/11 hijackers were educated and middle class; indeed, most suicide bombers are. Hamas’ charter, meanwhile, calls not only for the end of Israel, but rather for the elimination of all Jews. Hamas can no more moderate than Al Qaeda. Rather than compromise with Hamas, the international community must humiliate it and delegitimize it so it fades away into the dust heap of history, a Middle Eastern equivalent of the Baader-Meinhof gang.

If ideology is the problem and not grievance, then it is time also to reconsider aid and assistance to the Gaza Strip. The Palestinians have received more per capita than any other people. Throwing money at problems, however, seldom works and often makes them worse. Governments should be accountable to their people. If international aid organizations build housing, run schools and clinics, build electrical plants, and distribute food and clothing, then governments are free to invest tax and customs revenue in missiles and militias. The United Nations Relief and Works Agency (UNRWA) was never supposed to live out the 1950s. For emergency relief, it is time to let the United Nations High Commissioner for Refugees (UNHCR) take over, as they do everywhere else in the world. Cutoff of aid need not be entirely one-sided. Israel’s booming economy means it does not need much of the financial assistance to which it has become accustomed.

If to a hammer, everything looks like a nail, then to the State Department, every crisis looks like an opportunity for a diplomatic process. Sometimes, however, doing nothing can be the best strategy. When Palestinian politicians and the broader public recognize that terror will undermine their dreams, rather than enable them to win at the bargaining table what they cannot on the battlefield, then perhaps they can have an Anwar Sadat moment, compromise and win their state.

Michael Rubin is author of Dancing with the Devil: The Perils of Engaging Rogue Regimes (Encounter, 2014).