Time for Arab Leadership in the Middle East 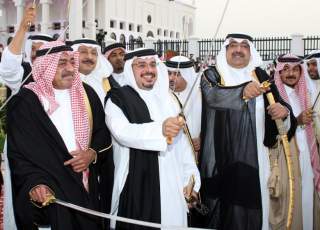 As Heritage Foundation Vice President James Jay Carafano recently opined in these pages, Arab military forces have largely been missing in action in the battle against ISIS. Equally important, leaders of Arab governments and mainstream and moderate Muslim religious authorities have joined them on the sidelines in confronting Islamic terrorism. The forces that are ripping the Middle East apart are largely homegrown, and not even the United States, the most powerful country in the world, can do much to tame them. If this region is ever going to emerge from chaos and offer a more secure, prosperous and just future for its 420 million inhabitants, Arab leaders will have to muster the unity, vision, and political courage to lift their countries up by the bootstraps.

Only a handful of people inside the Capital Beltway, mainly of the realist persuasion, are willing to acknowledge this truth. Depressingly, for the next 16 months, the American public will be spectators to one of Washington’s most venerable blood-sports: the blame game of who lost Iraq and, more broadly, the entire Middle East. Lost in all the finger-pointing and overblown rhetoric about America’s retreat from the Middle East will be one simple reality: Iraq, Syria and the rest of this region are not America’s to lose or win—and it is dangerous, foolish, and conceited to believe otherwise.

If Americans need something or somebody to blame, it is poor Arab governance and the failure of Arab leaders to take responsibility for cleaning up the hot mess they have made. For years, the habitual response of America’s Arab partners to any dangers they confronted was “what are you Americans going to do to solve our problems?” Successive U.S. governments willingly obliged, spending and in many cases wasting billions of dollars to protect them against threats that were largely, though not exclusively, of their own making. And at least until recently, administrations were all too willing to give Arab leaders a free pass on the domestic challenges that, as President Obama has said in recent interviews with New York Times columnist Tom Friedman, pose the most serious threats to their security and give Iran opportunities to stir up mischief.

And yet, within the Washington establishment, too many conversations about the Middle East almost always begin and end with bromides about American leadership and exceptionalism, America’s responsibility for fixing this angry, broken, and dysfunctional land, and prescriptions for more chest-thumping and interventionist U.S. policies. Arab leaders are happy to echo these memes by blaming America for avoiding taking ownership of their problems and the solutions.

The Iraqi Prime Minister’s outburst at a recent meeting in Paris of the international coalition against ISIL, in which he blamed the United States for the loss of Ramadi, is typical of this blame America first mentality. Seriously? In what parallel universe is America to blame for the abject failure of the Iraqi government to treat its large Sunni population with dignity, respect, and justice—and for the failure of Iraqi troops to fight and die to defend their country against ISIL?

When was the last time Arab heads of state held a summit to produce a vision and action plan for how they’re going to improve human security in their countries? If they need a road map, the five United Nations Arab Human Development Reports (AHDR), written by Arab scholars and researchers, catalogue the failure of Arab governments to build societies based on freedom, good governance, and respect for human dignity. They also offer solid recommendations for reforms. Precious little progress has been made in advancing this reform agenda since the first report was issued thirteen years ago.

Why does the United States feel obliged to lead the propaganda war against ISIS? Earlier this year, the White House convened a global summit to counter violent extremism (CVE). It helped raise consciousness and to coordinate various CVE activities of the United States and its partners. But the main event should have been held in the Middle East, organized by Arab countries, and attended by all Arab heads of state, leading moderate Muslim clerics and religious authorities, and Arab civic society groups.

Likewise, why should the administration take the lead in putting out the ISIL counter-narrative when, by all accounts, U.S. efforts in this area have been largely ineffective? Arab leaders and moderate Muslim voices should be leading this charge but here, too, they have largely been missing in action. Nor is it clear how much pressure, if any, the United States has exerted on Arab leaders to show this kind of leadership.

The statute of limitations for blaming America, unless you are a Republican candidate running for President, has expired. Affixing blame where it properly belongs may not play well in Peoria, but it will make for a much more informed and intelligent debate about the causes of the Middle East’s meltdown and what they, not us, need to do to bring large parts of the region out of its death spiral.

Richard Sokolsky is a Senior Associate at the Carnegie Endowment for International Peace.  From 2005-2015 he was a member of the Secretary of State’s Office of Policy Planning.