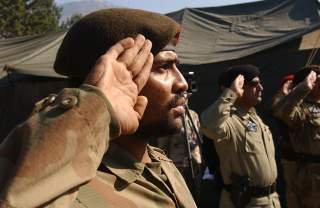 Pakistan’s checkered history of state building is marked by prolonged military rule and intermittent stints by civilian governments. Since the restoration of democratic governance in 2008, the institutionalization of democratic norms has been under tremendous stress, frequently leading to civil-military tensions.

The fledgling democratic process is trying to find its place in the country’s complicated decision-making machinery, where institutional roles collide and mandates overlap. The marginal civilian sources of input in the country’s security and foreign policies, in spite of the supremacy and sovereignty of the parliament as the apex state institution, are at the heart of this never-ending struggle. So far, civilian efforts to restore the institutional balance have not made much headway.

The federal government’s indirect and muted criticism of the military establishment, while struggling to keep good governance on track, has only strengthened the military’s narrative: civilian regimes are not competent enough to run Pakistan’s domestic security, national security and foreign policies. The recent episode, concerning Prime Minister Nawaz Sharif and his camp talking tough with military top brass, instructing them to take action against certain terrorist groups and then leaking the proceedings of this high-level meeting to a prominent journalist from the English-language daily Dawn, has only undermined the government’s own credibility. These recent events have played directly in favor of the military’s narrative.

In light of the above, efforts by civilian leaders to assert themselves have encountered stiff resistance, suspicion and hostility from the deep state. This tussle has repeatedly spilled over into the public sphere, creating uncertainty about the future of democracy in Pakistan. On such occasions, fears of the proverbial return of the man on the horseback start simmering.

Panama Papers inquiries pertaining to the PM’s family; expected changes in the military high command; ongoing conflict with India following the Uri attack in Kashmir; security operations in the northern areas and Karachi; deteriorating relations with Afghanistan; and the multibillion-dollar China-Pakistan Economic Corridor project, for which security arrangements have been undertaken almost entirely by the military, display the many layers of insecurity present in Pakistan. They also demonstrate, in the context of balancing the civil-military disequilibrium, the need to dissect the mindset of “military guardianship” prevailing in Pakistan.

The concept of military guardianship is central to civilian-military tensions in countries like Pakistan. It pertains to the role of military institutions in the political sphere and their amplification through processes of securitization, when threats to the status quo need to be framed and addressed under the banner of national security. Securitization is the process through which an actor (for instance, the state) communicates to an audience (civilians or the international community) that potential threats exist (such as terrorism, separatist movements, or an attack from an adversary) and extraordinary measures must be taken by the guardian (the actor) to counter them. Through such processes, narratives of security, monopolized by the military, seep into homes, places of worship and social conversations, fabricating reality and rationalizing securitization as the guardian sees fit.

In Political Armies: The Military and National Building in the Age of Democracy, the “military guardian” concept is founded on at least two principles, both of which can apply to Pakistan. The first is the perceived “birthright principle”; that is, had the army not sacrificed during the formative years of this nation, the latter could not have survived. The second, the “competence principle,” is the perceived belief that the military is the only institution competent to deal with matters of national interests and is thus best suited to decide what is or is not a matter of national security. It thus becomes the key actor in the processes of securitization and seeks to monopolize them.

Such interventionist approaches choke the space for alternative discourses, which are required in democracies. Communicating the establishment’s monopolization over matters of national and international security represents a discursive dominance, or the prominent discourse that constructs ideas, narratives and by extension a mindset. Discursive dominance is often empowered through warmongering and war rhetoric, as seen during the recent exchanges between India and Pakistan, and directly or indirectly secures the position of militaries as guardians of states and state interests. This construction is emboldened over time while threats, whether from within the country or outside, keep bureaucracies and media fixed in realist discourse analyses, “horsemen” are socialized into their guardian missions, and citizens’ social realities are constructed externally.

The continuation of this “warrior state” paradigm has not only bred mediocrity at the cost of excellence, but it has also turned potential opportunities for change into challenges or security risks—including the civilian government’s peace overtures with neighboring countries, independent journalism, and efforts to transform Pakistan from a security to a welfare state.

Mediocrity is doing the same thing repeatedly and expecting different results. The security establishment’s continued insistence on supporting militant proxies in Kashmir and Afghanistan and expecting results different than the prevailing status quo is self-defeating. Not only has this approach compromised Pakistan’s Kashmir and Afghan policies, but its domestic negative fallout has included the expansion of religious extremism and militancy in the country.

Such a besieged mentality hampers one’s ability to think outside the box and the prevailing institutional paradigms. In such an environment, the continuation of the status quo is labeled “stability,” and efforts to change the status quo are met with resistance and opposition, and considered to be destabilizing factors. This leads to policy inertia, which torpedoes efforts to look for alternative paradigms and define nationalism in any sense beyond animosity for the adversary. If patriotism is confined to hatred against a particular country, through displays of aggression, unabashed chivalry and brazen power displays, then the end result is just not closed borders, but closed minds and hearts as well.

This mindset has been trying to secure the state since Pakistan’s inception, but in the process has generated tremendous insecurity among the people. The examples of Karachi, FATA and Balochistan are cases in point, where the writ of the state is restored but the credibility of the state among the masses is eroded due to the insecurities they harbor about their socioeconomic futures and participation in democratic processes. This counterproductive approach saps energy, time and resources in casting blame, instead of constructive debates on national security, foreign policy and other issues.

Security and insecurity are both politically constructed in Pakistan. Pakistanis need to move away from a traditional realist view of security that fans the flames of military guardianship and advocates a Cold War mentality and zero-sum games, and toward constructive approaches that examine how Pakistan learns, articulates, imagines, processes and implements security, not only in the state and but in society at large. Undemocratic processes, encouraged by traditionalist thinking, are only likely to continuing fueling insecurities and widening the divide between the nation and the state, as well as between regional stakeholders.

Abdul Basit is an Associate Research Fellow at the S. Rajaratnam School of International Studies, Singapore. Zoha Waseem is a doctoral candidate at the Department of War Studies, King’s College London, UK.