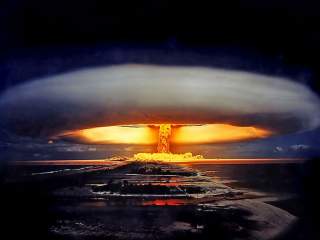 The United States is slated to spend about one trillion dollars over the next thirty years to maintain and rebuild its nuclear arsenal. That breaks down to roughly $35 billion a year, a fortune in this time of limited defense spending. Is it worth it? Twenty-five years after the end of the Cold War, the United States simply does not need—and cannot afford—to rebuild every nuclear-armed missile, bomber and submarine in its arsenal to last another fifty years as if the U.S.-Soviet rivalry never ended. Moreover, pursuing an excessive arsenal runs the risk of igniting a new arms race with Russia that could needlessly undermine U.S. security. Moscow has announced its own plans to rebuild its nuclear forces, but faces even greater economic challenges.

“We are about to begin a new round in the nuclear arms race unless some brake is put on it right now,” former secretary of defense William J. Perry recently warned. Indeed, a new arms race has already begun in slow motion, with current plans taking decades to carry out. Multiyear contracts are being signed, such as the recent one with Northrop Grumman for a new strategic bomber, and billions of dollars are being spent. Before long, the programs will become too big to stop. The Obama administration’s arsenal-modernization plans are also raising concerns among America’s nonnuclear allies, who see the effort as inconsistent with the president’s stated nuclear-disarmament goals. Yet Washington needs the support of these allies to strengthen global nonproliferation efforts.

It’s past time for the Obama administration to take a hard look at where the U.S. nuclear arsenal is heading. Given Russia’s saber rattling in Europe, it’s tempting to overbuild in the mistaken belief of further insuring safety. But the actual risk of a nuclear war is low, and U.S. conventional dominance is unquestioned. The United States no longer needs such an expensive insurance policy against the Russian nuclear threat—and this fact provides a rare opportunity to save tens of billions of dollars.

Saving money is becoming increasingly important for U.S. national security. Last summer, an independent, bipartisan federal commission cochaired by Perry and retired general John Abizaid called the administration’s plans for the nuclear arsenal “unaffordable” and a threat to “needed improvements in conventional forces.” The good news is that the United States can safely scale back its plans for the nuclear arsenal, saving scarce defense funds and reducing the dangers of a new arms race.

Some of America’s highest-ranking military officers share this opinion. Former chairman of the Joint Chiefs of Staff and retired general Colin Powell said that “the one thing that I convinced myself after all these years of exposure to the use of nuclear weapons is that they were useless. They could not be used.” Russian president Vladimir Putin’s Ukraine adventure is a case in point. The existing U.S. nuclear weapons in Europe did not keep Russia from annexing Crimea. Nor would more U.S. nuclear weapons push Russia back out. Beyond political rhetoric, nuclear weapons have played no role in this crisis. Moscow has increased its threats, but Putin does not seek a nuclear war with the United States. Such a war would only invite the destruction of Russia. In 2013, the commander of the U.S. Air Force Global Strike Command, Lt. Gen. James Kowalski, described the threat of a Russian nuclear attack on the United States as such a “remote possibility” that it is “hardly worth discussing.” “We’ve established a relationship with the Russians. We don’t have the ideological tension that we had during the Cold War. Which is not to say there aren’t points of tension, but they’re certainly not on the scale [they’ve] been in the past.”

The reduced risk of nuclear war with Russia means the United States does not need to fully replace each part of its current nuclear arsenal, which was designed to deter a geopolitical competitor that no longer exists. When the perceived risk of a nuclear conflict was at its zenith, the United States decided it needed a comprehensive insurance policy with sky-high premiums and multiple redundancies (known in the military as “hedges,” as in “to hedge one’s bets”). But we no longer require this expensive posture.

There are two main ways to save on nukes. First, the total number of nuclear warheads could be cut. The 2010 New Strategic Arms Reduction Treaty (New START) sets a cap of 1,550 on U.S. and Russian deployed, accountable strategic warheads each by 2018. In addition, President Barack Obama announced in 2013 that he would like to reduce the U.S. strategic arsenal, in coordination with Russia, by another one-third, to around one thousand warheads. Such bilateral reductions could go even deeper, bringing security benefits to both sides. Unfortunately, Russia has rejected additional reductions for now. Until Moscow changes its mind, it will be politically difficult for Washington to significantly reduce its nuclear warheads below New START levels. But it is safe to expect that U.S.-Russian reductions will resume at some point. We can plan for this by not overbuilding delivery systems now.

Second, while the two sides are temporarily stuck at New START warhead levels, the United States could reduce the number of new delivery systems it plans to build in the future. Fewer delivery systems do not necessarily translate into fewer deployed warheads, due to multiple redundancies in the system. For example, the United States developed a triad of nuclear delivery systems—land-based missiles, sea-based missiles, and long-range bombers—each functionally independent from the other. In the unlikely event that any one leg of the triad fails, the others could fill the gap. There are even more hedges built into each leg—each ballistic missile system has multiple types of nuclear warheads, the bomber force carries both gravity bombs and nuclear-armed cruise missiles, and there are more submarines deployed than needed. This belt-and-suspenders approach to nuclear forces may have made sense during the Cold War, but it has become an unneeded luxury.

Some have suggested that the United States no longer needs a triad, and could do just fine with a dyad or monad. In 2012, retired general James Cartwright, who led U.S. Strategic Command between 2004 and 2007, and former senator Chuck Hagel (who’d go on to become secretary of defense) coauthored a report for Global Zero, which recommended that U.S. intercontinental ballistic missiles (ICBMs) be eliminated due to their inherent vulnerability and lack of targeting flexibility. U.S. strategic bombers could see their nuclear role eliminated too, as they are not armed with nuclear weapons on a day-to-day basis and already play a limited nuclear role. A white paper issued by the Cato Institute in 2013 recommended that the United States keep only submarines, which are the most survivable leg of the triad. Still, political reality suggests that Washington is not about to dispense with the triad, which is supported by the president and by both parties in Congress.

Any politically feasible plan will start with keeping the triad, but there is growing support in Washington for trimming some secondary redundancies and “luxury” items in U.S. nuclear delivery systems. Do not confuse this with tinkering at the margins. The money at stake is immense, and the savings—roughly $75 billion in the next decade alone—come without compromising U.S. nuclear priorities.

Scaling back plans to replace the current fleet of Ohio-class nuclear-armed submarines is one of the most profound cost-saving measures the Pentagon could undertake. According to a 2015 Congressional Research Service (CRS) report the acquisition cost of the replacement program, including research and development, is estimated to be $139 billion in then year dollars. By reducing the current fleet to eight and building eight new subs instead of 12, the Navy would save approximately $21 billion over ten years, and an additional $30 billion in the 2030s, according to the Congressional Budget Office (CBO).

Under New START the Pentagon plans to deploy approximately one thousand nuclear warheads on submarines. Eight submarines can meet this requirement (each sub could hold 128 warheads). So why buy twelve? The “need” for twelve subs has more to do with how promptly the missiles could strike their targets. More subs means they could be stationed within striking distance of their targets in China and Russia, ready to fire at a moment’s notice. This “quick launch” requirement is based on Cold War thinking that should now be relaxed. Instead of forward-deploying subs, they should be kept out of harm’s way, as an assured retaliatory force if ever needed. This approach would utilize their comparative advantage as second-strike weapons.