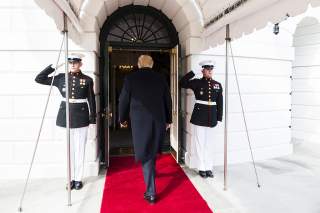 Donald Trump is inviting the wrong Asian dictator to meet him in Washington. Instead of focusing on Philippine leader Rodrigo Duterte, he should extend an invitation to North Korea’s Kim Jong-un. His comments today that under the “right circumstances” he would be “honored” to meet with Kim were welcome ones, but he should go even further. Trump needs to display the innovative negotiating skills that he touted during the campaign and break with decades of stale and failed U.S. policy.

Only by holding talks at the White House with Kim can he bring an end to the conflict on the Korean Peninsula. The chorus of voices denouncing his invitation to Duterte will complain that Kim is a monster. But it is precisely because Kim is a ruthless despot whose human-rights record makes Duterte look like a choirboy that Trump should reach out to him in what would amount to the ultimate exercise of realpolitik. If Trump solves the Korea crisis, he can decisively boost American national security and begin the transformation of the North into a more peaceful country.

The lesson of the Cold War is that détente offers a road to undermining totalitarian regimes. Confrontation tends to shore up shaky regimes. The mistake the Trump administration has been making is in ramping up tensions with Pyongyang, thereby convincing the North that it must attain the ability to hit the American homeland with intercontinental nuclear missiles as quickly as possible.

Critics will argue that the North is led by an irascible and mercurial leader who cannot be trusted. But so far, Kim has played his cards shrewdly. He appears to be anything but a nutcase. He is consolidating power internally by polishing off potential internal rivals and by insisting that North Korea develop its nuclear-missile program. So extensive has his focus on nuclear weapons been that the Financial Times reports that the North Korean army would be unable to fight a land war for more than a few weeks: “the apparently formidable force is beset by an array of problems, from fuel shortages to ageing equipment, that would choke its capabilities in the event of prolonged conflict with the US and its allies.”

This suggests that the North isn’t really preoccupied with fighting and winning a war against South Korea and its American ally. Rather, the name of the game is regime survival. Having witnessed American attacks on Iraq and Libya, the calculation in Pyongyang is that it needs nuclear weapons as the ultimate deterrent against an American-led attack.

Trump can devise a way out of this dead-end. He should contemplate a deal, corresponding to his America First policy, that would allow the United States to reduce its footprint in the region. The contours of a deal could look something like this: a nonaggression pact between Washington and Pyongyang, formal recognition of North Korea as a legitimate state, intrusive inspections of the North’s nuclear facilities under UN auspices, withdrawal of the bulk of American forces from South Korea (while retaining a significant presence in Okinawa), and the stated goal of created a united and neutral Korea.

Much of the language of any agreement could be derived from the language of the 1972 Basic Treaty between West and East Germany. Until then, West Germany had clung to the Hallstein Doctrine, which prescribed that Bonn would not have formal diplomatic relations with any country that recognized East Germany as a legitimate country. Today, America’s stance toward North Korea is as ossified as the Hallstein Doctrine was by the early 1970s. Far from representing a betrayal of German national aspirations, reaching out to East Germany ultimately undermined the regime. Only in isolation could it thrive. Once it was exposed to Western ideas and travelers, the rotten edifice collapsed.

Trump would have to prepare the groundwork carefully. He should begin the negotiations with the North by appointing a high-level emissary who would establish a secret back channel to the regime. Any invitation to Kim should be at least for a week of travel through the United States, including visits to Hollywood, Wall Street, Disneyland and the Midwest. In this regard, Trump could use Nikita Khrushchev’s famous visit in September 1959 to America, when he crisscrossed the country, as a model.

It’s time, in other words, for Trump to roll out the welcome mat for Kim.