Time for General Mattis to Move On 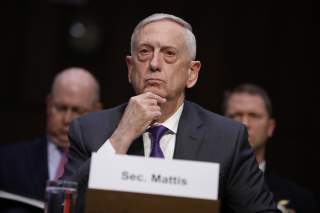 There is word that President Donald Trump is thinking about pushing Gen. James “Mad Dog” Mattis out as his Secretary of Defense, tired apparently of Mattis’ slow rolling or blocking his defense initiatives. I hope if this happens President Trump picks me as Mattis’ replacement. Unlike Mattis, no one will think I am a hidden Democrat. Unlike Mattis, I heartily agree with Trump’s foreign-policy instincts. Expanding NATO to Russia’s borders wasn’t a good idea. And our allies from the Sea of Japan to our neighbor to the North are freeriding on the backs of American taxpayers by having our security guarantees without paying much to help defray the cost for their own defense. I am ready to sing the praises of our wonderful leader.

There is a price. In exchange for putting up with all the honor guards, ribbon cutting, and fawning from flag officers and other ambitious types, I will insist upon having more competition among the services. Competition is good for the economy, for our universities, for our politics, and for developing effective military doctrine and weapon systems. We need more of it, not less. We have the best aircraft because we have multiple air forces. The same is true for our strategic missiles, satellites and UAVs. The Army is better because there is a Marine Corps. Competition among the services is the key to innovation and to strong civilian control over military policy. I am all for a Space Force as long as the other services can develop space requirements independently to fit their own warfare needs and perspectives. Monopolies are bad.

I also will insist that the Department of Defense discourage Congress and others from offering more acquisition reform. The department has to be honest in explaining to them that there is no magical way to acquire complex weapon systems cheaply, quickly, and without disappointment. In fact, the United States has the most experience and the most success in buying such systems. Reforms usually only add to the procedural complexity for buying weapons and/or repeat failed and now forgotten past “solutions.” The weapons are complex, costly and difficult to perfect because United States has to be prepared to fight in all environments against opponents with the most challenging capabilities. Neither Disney nor Silicon Valley, the French Acquisition Corps nor Japanese car manufacturers, as good as they are, have easy answers to our military technology problems. Too often a focus on acquisition reform in the Congress is a way of avoiding more important discussions of what wars are necessary to fight and for what ends.

I promise only the good wars, the ones we win. Of course, that means fighting wars we really care about because our security is at risk, not other people’s civil wars or other people’s boundary disputes. America is a terrifically powerful country which fortunately lives far from most of the world’s problems. Our advice and soldiers should be very cautiously distributed overseas. Just because we are so powerful and can intervene far from our shores does not mean that our interventions will be wise, widely welcomed, or hold the support of the American people. Our military technology allows us to bomb with great precision and near immunity. That only means it should be used with great restraint. I think President Trump believes that. If so, and if Mattis has to go, then I am tanned, rested, and ready to serve.

Harvey “Mostly Right” Sapolsky is Professor Public Policy and Organization, Emeritus, at MIT and the former Director of the MIT Security Studies Program.