Time to Improve the Department of Homeland Security 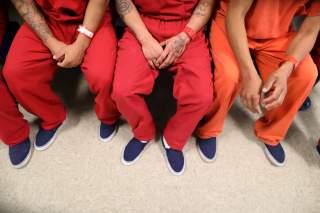 This commentary is part of a series on the reauthorization of the Department of Homeland Security. Future topics will include: improving operational control of the department; aligning of requirements, research, development, and contemplating major DHS organizational realignments.

The question really is not whether such legislation is needed. After fifteen years, comprehensive legislation would be helpful in codifying the roles and functions given to and assumed by the department since its inception. However, are there other necessary reforms to the Department of Homeland Security that could be addressed?

Sixteen years have passed since 9/11, which was the defining event that led to the creation of a department dedicated to the security of the homeland. With the initial authorizing legislation, twenty-two disparate organizations with unique authorities and constituencies were combined to create the third largest cabinet-level agency in the U.S. government. Each came with different lineages, operating styles, contracting mechanisms and cultures. Some had overlapping authorities that had to be addressed. Others, such as the Transportation Security Administration, were cut from whole cloth.

Over time, missions and structures were developed to better respond to the challenges of the day. Many of the original structures from the original legislation have been replaced through legislative and administrative restructuring. The cybersecurity mission saw significant growth throughout Department of Homeland Security. The realization that radicalization within the homeland had come to represent a major terrorism threat to the United States led to the establishment of a program and later an office within the headquarters for countering violent extremism. Failures identified during Hurricane Katrina led to the Post-Katrina Emergency Management Reform Act, which “provided substantial new authority to remedy gaps in response, and included a more robust preparedness mission for FEMA (the Federal Emergency Management Agency).” After a shaky start with the U.S. Visitor and Immigration Status Indicator Technology program, the Office of Biometric Identity Management was established within the National Protection and Programs Directorate.

Successive secretaries attempted to add structure and processes, but in most cases changes were imposed in reaction to specific incidents and the management style of the principal, and not with a view towards building long-term institutional strength. With each lesson learned, new processes and organizational structures were developed. But these changes addressed specific issues, incident by incident, and not comprehensively.

More fundamental change could improve support for core operational missions, reduce control issues, and reform and resize the department. When such a reform was undertaken within the Department of Defense in 1995, it was called the Roles and Missions Commission and proposed recommendations across three broad themes for improving capacity: “the unified military operations themselves, productive and responsive support, and improved management and direction.” This same sort of effort would greatly benefit the Department of Homeland Security.

History demonstrates that fundamental change usually occurs in response to an event, a perceived shortfall or shifts in the environment. It normally cannot be accomplished from within and requires an external-change agent with the vision to overcome bureaucratic inertia. For example, the National Security Act of 1947 did not come from the national-security establishment and was not embraced by the existing national-security organizations. In fact, service resistance to the new law and the inability to place operational effectiveness ahead of interservice rivalries led to the Goldwater-Nichols Department of Defense Reorganization Act of 1986.

Several weighty issues are worthy of consideration in such a comprehensive-reform initiative.

First, should the Department of Homeland Security continue to function with a decentralized power structure, a weak central structure and a preponderance of the power vested with the operational components such as Customs and Border Protection, Immigration and Customs Enforcement and the U.S. Coast Guard? A related issue is addressing how operational effectiveness and efficiency could be enhanced in the Department of Homeland Security?

What can be done to build a capability-development process that incorporates the entire homeland security strategy? Such an initiative would incorporate strategy and planning, research and development, acquisition and resources to assure that capabilities are delivered to the operational elements of the department.

What countering weapons of mass destruction capability is required in department and where should it reside? This vexing problem has been a question facing the department since Congress first asked for a study to be conducted on the issue five years ago.

Reauthorization of the Department of Homeland Security is vital to clarifying responsibilities and setting expectations for the continued evolution of the department. However, to address some of the core issues that the department is facing, policymakers might wish to consider conducting an external review, which could help inform a broader future Homeland Security reform bill.