Time for an Industrial-Policy Race, Not a Trade War 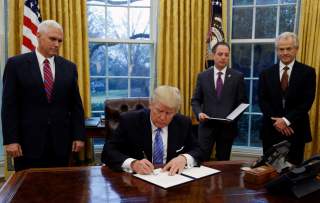 Wariness of a trade war between the United States and China has rattled investors worldwide. Hopes remain high that threats of imposing and retaliating with punitive tariffs will remain mere threats. But while proponents of free trade continue to insist that there can be no winner in an all-out trade war, they also are well aware that the current playing field is hardly even. The Trump administration’s insistence on reciprocity in trade is certainly one that enjoys support from free-traders and protectionists alike. The problem, though, lies in placing far too much emphasis on reducing the trade deficit, and not giving enough attention to investing in future U.S. competitiveness.

To be sure, the fact that the U.S. trade deficit worldwide rose by 12 percent in 2017 to $566 billion, with the deficit with China alone reaching record levels of over $375 billion, is alarming. But instead of putting up trade barriers to protect select industries, the more competitive approach would be to learn from Asia’s recent past by investing strategically in key sectors that will strengthen America’s economic foundation. That is certainly the approach China is taking with its Made in China 2025 plan, which identifies ten key sectors that it wants to bolster by 2025, including biotechnology, robotics, IT and aerospace. The core driver of the strategy is an acknowledgement that China no longer wants to compete in low-skill manufacturing industries. Moving up the value-added chain is especially pressing, as China is already losing to lower-cost countries, including Thailand and Vietnam, in sectors such as textiles and footwear manufacturing.

Industrial policies are hardly unique to China or even to Asia. One of the most recent notable government-driven plans is Germany’s Industry 4.0 plan. The initiative was adopted in 2013 to integrate technology and manufacturing to enhance efficiency and competitiveness, and was much touted by Chancellor Angela Merkel to help ensure that Germany remains a leading economic power. Japan’s history of close relations between the government and the private sector, and of prioritizing resources to targeted areas, also remains a lesson in how public policy can bolster growth.

Currently, the United States remains the undisputed global leader in technology and, more broadly, in the services sector. Indeed, it has a surplus of $262 billion in the service sector, thanks to its competitive edge in twenty-first-century industries such as telecommunications, information technology and financial services. But the question is whether it can remain so without proactive support from Washington, while other countries step up their own interventionist policies to challenge U.S. leadership in technology, innovation and the service sectors.

Yet instead of taking measures to protect its lead in the industries of the future, Washington has traditionally been reluctant to take the initiative in pursuing industrial policies. Instead, the focus has been on taking protectionist measures, echoing the steps taken in the 1980s and 1990s against Japan, then seen as an economic hegemon, to salvage the manufacturing sector and reduce the trade deficit in goods, rather than to expand the surplus in services still further. According to Peter Navarro, director of the White House National Trade Council, the administration’s strategy involves hefty tariffs on a far range of products, including solar panels and steel. The administration’s attack against China has been even more targeted, as it looks to hit over 1,300 products with 25 percent tariffs. In addition to renegotiating existing trade deals, including the North America Free Trade Agreement and the U.S.-Korea Free Trade Agreement, such moves are expected to lead the way to narrow the trade gap and even eliminate the goods deficit within the next year or two.

Clearly, though, the White House is also well aware of the economic threat that a longer-term Chinese economic strategy poses to the United States. From the list of Chinese items that would be hit by the administration’s tariffs, ranging from telecommunications to IT equipment, it is clear that Washington wants to take a preemptive strike against China threatening to take over the United States as a global leader in key areas of future growth, even if China is not flooding U.S. markets with those products at the moment.

But as China threatens to retaliate with its own tariffs against U.S. products should Washington advance its protectionist measures, the threat of trade wars and prospect of higher prices in both countries loom large. Rather than embarking on a race to raise ever-higher tariffs on a longer list of goods, what Washington must focus on is how to counterbalance the strategic growth plans being developed—not only by China, but also by other countries in Asia and beyond. Rather than heeding to the interests of specific industries, U.S. competitiveness could be bolstered by developing a comprehensive plan that tackles longer-term concerns about protecting intellectual property and blocking technology transfers. Making better use of regulations under the Committee on Foreign Investment in the United States (CFIUS) to protect sensitive U.S. industries is a step in the right direction, but such defensive action is hardly enough.

The administration has clearly identified some of the challenges that lie ahead for the U.S. economy. It has also demonstrated that it is willing to take risks and take action on the diplomatic and economic fronts that other presidencies may otherwise have shied away from. The United States must take action through comprehensive public policies to preserve its standing as a leader in innovation and technology before it is too late.