Time for a 'Lousy' Peace in Ukraine 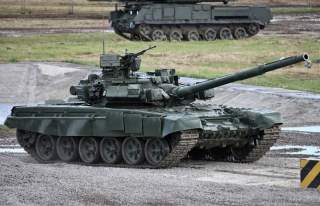 President Obama should deny Congress’s appeal to send deadly force arms to Ukraine. Such an action would be neither in the national interests of the United States, nor of Ukraine itself.

Ukrainians and Russians often use the old saying that a lousy peace is better than the best of wars. If the geopolitical considerations of this conflict are weighted with its real human costs for Ukraine, the truth of this becomes clear.

The costs in lost lives and social strife of a military victory over the separatists are too high for Ukraine to bear. The war has claimed the lives of 6,000 citizens at a bare minimum, and displaced more than a million people within Ukraine and possibly as many without. It has torn open ideological and social divisions that have plagued the country since independence, and which after 10 months of brutal fighting are beginning to look unsurmountable.

In this intense wartime atmosphere, Ukraine’s democratic institutions are suffering. Opposition to the government’s conduct of the war and the economic crisis are often equated with treason or inciting domestic unrest. Government control over the information sphere is tightening as never before. The national economy is in a deep crisis, with massive inflation pushing average incomes down to $150 a month. The conflict in the Donbas is drawing energy away from the fundamental political reforms that millions of Ukrainians called for during the Euromaidan movement. Instead of a new kind of governing, Ukraine is descending into a familiar struggle between oligarchic clans.

In facing down the separatist threat, the Ukrainian army, National Guard and privately organized volunteer battalions have conducted sustained artillery shelling of rebel-held towns, resulting in numerous lost lives. The continuous shelling of Donetsk, Luhansk and other Donbas towns has at times resembled collective punishment.

Local activists from the city of Lisichansk showed me videos and photos of the aftermath of Ukrainian artillery attacks in July that drove the separatists from the city. A ten story apartment building is a charred ruin, with the central “stack” of apartments collapsed into rubble.

An elderly man showed the numerous shrapnel he collected in his garden and pried out of the walls of his shattered house when he emerged from his root cellar after the shelling.  It should be noted that these activists are supporters of a united Ukraine, who did not side with the separatists when they controlled their city.

Today they are doing great work to aid the thousands of refugees that have flooded into their city from the front lines. But they cannot help but ask – why was this done to us? Is this really the only way? And they consider with dread the prospects of renewed fighting.

Recognizing the terrible collateral damage of Ukraine’s campaign against the separatists does not in any way turn the latter into some kind of heroes. Their shelling of Mariupol, Kramatorsk, Artemivsk, Debaltseve, Avdeevka and other Ukrainian-held towns shows that they have no qualms with using the same brutal tactics. One refugee related how the rebels shelled her village relentlessly throughout the summer, despite the fact that the Ukrainian National Guard detachment had deliberately moved out of the town so as not to draw fire on it.

Other refugees who fled from the “Luhansk People’s Republic” to Kharkiv told me how they were denied exit by the rebels, who wish to keep a human buffer between themselves and the Ukrainian army. They were forced to sneak into government-held territory on foot, using a map of unmined fields leaked to them by a sympathetic rebel.

But what I hear more and more often are stories from people who feel stranded between two warring sides. Many have had their homes shelled by both sides as their towns are alternately “occupied” and “liberated.” They may be patriots of Ukraine or they may be sympathetic to Russia, but they are all exhausted by the violence and cannot understand why the tough decisions that would end the fighting are not being made.

A resumption of armed hostilities in the Donbas means more of this hell. That is 100 percent certain. Many of these towns will again become the grounds for artillery duels and it is likely that new territories will come under fire. Maybe this would be worth it if there was real hope that an offensive with U.S. arms would be the decisive battle of the war. However, that is a very doubtful assertion considering Russia’s determination not to see “its side” defeated.

The stakes are extremely high in this conflict not only for Putin’s government, but for ordinary Russians as well. I have been living in Russia for most of the conflict in Ukraine, and the majority of people I know there interpret the war as an existential struggle with the United States. This ideological mobilization can be seen in the massive Anti-maidan rally in Moscow against the new government in Kyiv and its American “puppetmaster,” as well as the country-wide demonstrations celebrating the one-year anniversary of the Crimea annexation.

We don’t need to agree with or justify their beliefs in order to recognize the risk of ignoring them.  Russians have been continuously told in the media that the provision of U.S. arms would justify open intervention by the Russian army, in place of the hybrid war it is now waging. It is highly unlikely that the U.S. would send boots on the ground, but Russia could do so easily and with strong support from its public.

As a result our military assistance could lead to the exact opposite of a conclusive victory: the prolongation and intensification of the war and the drastic increase in Russian involvement.

What would remain of Ukraine after the showdown?

It is time to recognize that forcing the total capitulation of the separatists is either impossible or unjustifiably costly in human lives. Rather than accept the violent uncertainties of a renewed war, the United States should help Ukraine facilitate a negotiated settlement whereby the “People’s Republics” remain inside the country in exchange for expanded political and economic autonomy. As Ukrainian political scientist Oleg Voloshin put it: “What’s worse: Russian sympathizers in our parliament or Russian soldiers on our territory?”

We should be realistic – a negotiated peace with the rebels and their Moscow backers would partially legitimize armed separatism and Russian violation of Ukrainian sovereignty. The “People’s Republic” separatists would likely remain the dominant political force in the Donbas, well financed by the Kremlin and function as a lever of Russian influence over Ukrainian domestic politics.

But in theory this would give those Ukrainians who support the separatists a means to express their discontent through political and not military means, as the Sinn Fein party did for IRA supporters in Northern Ireland. Their representatives would join the bloc of parliamentarians opposed to policies of the government that emerged from the Euromaidan revolution, which dominates in those portions of the east not under separatist control.

This reflects the powerful political division that opened up in Ukraine after the Euromaidan movement ousted President Yanukovych in February 2014. Nationwide public polling during the mass protests showed that while the movement commanded significant support (45 percent), it was geographically uneven, with a mere 17 percent of easterners regarding it positively. The latest polling demonstrates nearly equal numbers of Ukrainians who consider that the movement did the country harm as did it good (33 percent vs 36 percent).

The Donbas War has deepened and intensified that division, even within those regions of Ukraine where separatism has not found a foothold. The longer it drags on, the less likely a political reconciliation becomes. If these difficult questions of east vs. west, and Europe vs. Russia, constituted a faultline in Ukraine politics for the first 23 years of its independence, since 2014 they have begun to resemble a chasm. Every effort should be made now to ensure that it does not become unbridgeable.

That means painful, ideologically suspect negotiations and not war. It is time for a lousy peace in Ukraine.

Brian Milakovsky has been living in Russia and Ukraine and working as a forest ecologist since 2009. For the past two months he has been volunteering with refugee aid organizations in Luhanska Province in eastern Ukraine.