Time to Recognize the Truth Behind Europe's Endless Terror 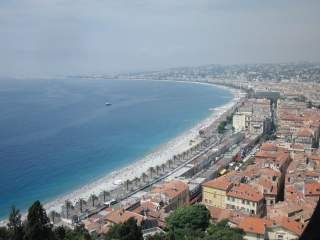 France has a problem. The problem is too many Muslims in a society that many Muslims despise. The centuries-long conflict between Islam and the West is ongoing, and it erupts intermittently on French soil in the form of the Charlie Hebdo shooting of January 2015 (twelve dead), the multiple Paris attacks of November 2015 (130 dead, 368 wounded), and now the truck attack in Nice (eighty-four dead so far, and more than one hundred injured).

As of this writing, we don’t know who perpetrated the Nice slaughter, but in the other two instances (and numerous lesser attacks), the killers were people, or their offspring, welcomed into Western society from Islamic lands. The two Islamist gunmen at Charlie Hebdo were French Muslims of Algerian descent. Those responsible for the massacre of November 2015 were all EU citizens, and French citizens helped organize the carnage. Some had been fighting in Syria and returned to Europe as ersatz refugees.

President Obama wants us to think this carnage has nothing to do with the essential culture of Islam, which he insists is peaceful at its core and poses no threat in itself to the nations or the peoples of the West. It is just these twisted people who distort Islam to their own nefarious aims that we have to be concerned with. He takes a lot of criticism for refusing to utter the words “radical Islamic terrorism” or other derivations of that concept. But he insists that his use of such words would only exacerbate the problem, casting aspersions on peaceful Muslims and diminishing their willingness to help control the malefactors.

This is fatuous. In any population of Muslims within the West, a proportion will harbor Islamist sentiments, will despise the West as a morally inferior civilization that has, however, dominated many lands of Islam through a superior technology of warfare. I have quoted in these spaces the words of the late Harvard political scientist Samuel Huntington on all this, and I do so again because they capture so powerfully the essence of what we face.

“The underlying problem for the West,” wrote Huntington, “is not Islamic fundamentalism. It is Islam, a different civilization whose people are convinced of the superiority of their culture and are obsessed with the inferiority of their power. The problem for Islam is not the CIA or the U.S. Department of Defense. It is the West, a different civilization whose people are convinced of the universality of their culture and believe that their superior, if declining, power imposes on them the obligation to extend that culture throughout the world.” He also wrote, “Some Westerners . . . have argued that the West does not have problems with Islam but only with violent Islamist extremists. Fourteen hundred years of history demonstrate otherwise.”

The Atlantic writer Jeffrey Goldberg rejects this perception. He echoes the Obama view by insisting that we do ISIS a favor if we suggest that Islamist fervor emanates out of Islam and reject the view that ISIS is utterly aberrational. “The war we are experiencing is not primarily a war between civilizations,” he writes, “but a war within a civilization.”

That’s an interesting sentence that cries out for some parsing. Goldberg overtly rejects Huntington’s famous thesis that we are living through an era characterized by civilizational clashes. No, he says, it is merely a clash within Islam—between normal Muslims who have no complaint with the West and can be easily assimilated there and those who harbor radical Islamist views. That’s the real battle, according to Goldberg. And yet he refers to “the war we are experiencing,” which is an intriguing phrase—about as antiseptic a way as could be devised to express what’s been happening. If it is merely a war within Islam, why are we experiencing it? Are we merely innocent bystanders who got too close to the strife? Are we perhaps to be characterized as “collateral damage”? Tell that to the people at the Boston Marathon who lost their lives or limbs in April 2013. Tell it to the victims of San Bernardino and Orlando. Tell it to the people of France.

No. Huntington is right, and Goldberg is wrong. There is a natural tension between the West and Islam that has always been there. And America has exacerbated that tension tremendously in recent years by establishing military bases upon the sacred Islamic soil of Saudi Arabia, invading Islamic lands, upending Islamic national leaders, and demanding that Muslims in their own lands adopt Western ways and ideals.

At the same time, many Americans are shocked when someone suggests that perhaps we should limit the influx of Muslims into the country in the face of the Islamist terrorist threat. Consider what happened when Donald Trump suggested, after San Bernardino, that Muslim immigration to the United States should be halted pending a better understanding of the potential threat it posed. The reaction was immediate and nearly hysterical. Republicans, Democrats, liberals, conservatives, foreign leaders, military men—all rushed to denounce the suggestion as un-American, an assault on “who we are” and “what we as a country stand for.” Wrote conservative commentator Scott McConnell, “For several days, America experienced the kind of bipartisan power elite unanimity which one thought could happen only in the wake of national tragedy.” He noted that many commentators suggested the country actually needed more Muslim immigrants to help in the struggle against terrorism.

Meanwhile, as McConnell also noted, America continued its relentless killing of Muslims in their own lands—the result of America’s ongoing military involvement in the Middle East and South Asia. Harvard’s Stephen Walt has estimated that America has been responsible for the deaths of nearly three hundred thousand Muslims in the past thirty years, some 116,000 of them during George W. Bush’s ill-fated Iraq war. And yet that generates no outrage even approaching the outrage that ensued with Trump’s suggestion.

The Muslim population of France is about 7.5 percent, a critical mass that threatens ongoing domestic strife within that country. The renewal of Western cultural identity urged by Huntington won’t come easily there. Our hearts must go out to the entire country in the wake of episodes of mass murder like the truck attack in Nice on Thursday. And our sympathy and good wishes must go to all the people of France—of all backgrounds and creeds—as they struggle with the civilizational clash within their borders.

The Muslim population of American, by contrast, is about 1 percent, though Muslims make up about 10 percent of ongoing legal immigration and differential birthrates will boost that population segment in coming years. The question for America is whether it should seek to craft immigration policies designed to prevent America from facing the challenge now confronting France. It’s a question that most Americans clearly don’t want to face, as reflected in the reaction to Trump’s suggestion of a temporary halt to Muslim immigration. But, if the trend lines of violence continue along their current trajectory, here and throughout the West, political sensibilities on the issue could change.