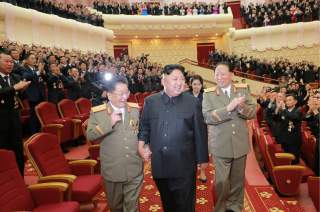 As North and South Korea negotiate an “end of war” declaration and press the United States to do the same, Washington must remember that, though testing has paused, North Korea remains one of the world’s most dangerous threats. An “end of war” declaration with the United States is meaningless since war on the peninsula was a UN police action naming North Korea a hostile aggressor. The UN resolution called on member countries to defend the South and the United States led the effort. For war on the peninsula to end, the DPRK would have to convince UN members that it is no longer a hostile power. That would be difficult for Pyongyang to prove, given the manifold dangers Kim Jong-un and his regime still pose. Much focus has been on Pyongyang’s growing nuclear arsenal and ballistic-missile programs which threaten Seoul and Tokyo. But that is just one threat. The other, more clear and present threat is Kim’s continued proliferation of conventional and unconventional weapons to the world’s worst regimes.

A new book by leading North Korea analyst Bruce Bechtol, North Korean Military Proliferation in the Middle East and Africa: Enabling Violence and Instability, traces the history of North Korea’s arms relations with Iran and Syria, and reminds us how central proliferation is to North Korean strategy. Pyongyang’s transfer of a nuclear facility to Syria near Al-Kibar is now well known. Soon to be forgotten, however, is how the U.S. and Israeli intelligence communities almost missed this transfer until it was too late. Only recently has Israel broken its silence on about the details of its 2007 operation to destroy the Syrian reactor. In doing so, Israel revealed how late it discovered the weapons facility and just how little the United States seemed to know about it.

North Korea’s proliferation activities are extraordinarily difficult to detect. Since North Korea’s economy depends on the revenue proliferation provides, the country has developed a complex and sophisticated network that funds and transfers these weapons through a network of front companies that ship parts of missiles and weapons of mass destruction, which are later assembled in-country by North Korean scientists. The Israelis were only tipped off to Al-Kibar after a train explosion in North Korea killed visiting Syrian nuclear scientists in 2004. What this means is that much proliferation knowledge resides in the brains of scientists who transfer information with ease.

Moreover, North Korea’s nuclear proliferation seems immune to nuclear-conference diplomacy. Syrian-North Korean nuclear cooperation appears to have begun in the late 1990s as the United States and North Korea were at the height of engagement. The finalization of the reactor occurred in 2005–07, during the same time that the United States was inducing the North Koreans to voluntarily get rid of their weapons of mass destruction by lifting sanctions and promising greater diplomatic recognition.

What Al-Kibar revealed was that the “Axis of Evil” that George W. Bush touted was more expansive and intricate than he described. It did not just include North Korea, Iraq, and Iran, but also Syria and all the other places these countries have proliferated to. The North Koreans have been central to the chemical-weapons program that Syrian president Bashar al-Assad has used against his own people. The UN recently found a troubling number of North Korean-to-Syrian transfers during the height of the Syrian civil war, noting that Syria’s Scientific Studies and Research Center that develops Syria’s chemical weapons are “dependent on foreign sources,” including North Korea. This follows revelations that Syria has attempted to illicitly purchase dual-use materials from North Korea to advance its chemical-weapons program.

North Korea is not only propping up Syria’s weapons programs, but also Iran appears to be North Korea’s biggest customer. Pyongyang may be selling up to $3 billion per year in conventional and WMD weaponry to Tehran, including different variants of Scud missiles and underground nuclear facilities. Given Iran’s regional strategy of using proxies to further its interests, it is no surprise that these Scuds have been used by the Houthi insurgents in Yemen. Given important misses in the past, Congress should be pressing the intelligence community to report on what it knows about further transfers of North Korean WMD and missiles to other rogue regimes and terrorist groups such as Hezbollah. It makes little sense to return to pressure on Iran while easing up on one of its biggest suppliers: North Korea.

Recent openness by Israel about its destruction of the North Korea nuclear facility in Syria and past historical practice does not inspire confidence that Pyongyang has halted its proliferation during this period of inter-Korean and U.S.-North Korea summitry. While Kim has reasons to halt his missile and nuclear testing for now—as he is probably satisfied that what he possesses works—he still needs the revenue garnered from his proliferation network. And his reported increase in fissile material during this time will certainly be sold to the world’s worst actors.

Much of the debate during the period of maximum pressure and “fire and fury” centered on whether or not Kim could be deterred from using his nuclear weapons against the United States and his allies. That debate was hardly satisfactory, given the fact that a weaponized ICBM was a new development that requires new thinking about what deterrence meant. But what we do know is that Kim cannot be deterred from proliferating. The United States lost a chance to establish such a deterrent when it let Israel strike the Syrian reactor, rather than doing so itself.

The only strategies short of regime change that have a chance at stemming the tide of proliferation are maximum pressure, which continues to focus on all proliferation front companies, threat reduction through reinvigorating programs like the Proliferation Security Initiative, and diplomacy that hinges on collectively working with other countries to stop treating North Korea like a normal country when its embassies and diplomatic pouches have been used for proliferation purposes.

The Trump administration went further than previous administrations in assembling a global-pressure campaign that, if it were allowed to continue on, could have resulted in the collapse of Kim. Trump also went further than any president with his personal diplomacy. The administration is thus on firm ground return to an amplified version of maximum pressure, global threat reduction, and the general weakening of Kim. It gave peace a chance and learned that Kim will not give up his weapons or proliferation voluntarily.

North Korean leader Kim Jong Un reacts during a celebration for nuclear scientists and engineers who contributed to a hydrogen bomb test, in this undated photo released by North Korea's Korean Central News Agency (KCNA) in Pyongyang on September 10, 2017. KCNA via REUTERS