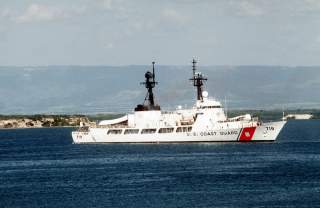 As a high-level U.S. delegation travels to Havana for talks on migration today, the United States must revisit its outdated policies regarding migrants from Cuba. U.S. Coast Guard interceptions of Cuban migrants have risen by 117 percent since the two countries announced that they would normalize relations last month. The United States must revise its policies to both discourage migration and comply with international human-rights law. To do otherwise would be both a human-rights travesty and tremendous hypocrisy by a nation that wants Cuba to improve its commitment to human rights.

Since 1995, the U.S. has maintained a “wet foot, dry foot” policy toward Cuban migrants. Any Cuban intercepted by the U.S. Coast Guard in the waters between the two countries may be returned to Cuba. Cubans who make it to U.S. shores, and therefore have “dry feet,” are expedited for permanent resident status in the United States. Cubans who can cite a specific fear of persecution on the basis of political opinion or other grounds specified in U.S. and international law will be brought to the United States for further evaluation of their asylum claims. This policy was adopted after the Balseros crisis of 1994, when Fidel Castro lifted restrictions on those leaving the island and thousands of Cubans attempted to sail to Florida. The United States claims that this policy discourages Cuban migration, while the Cuban government says that it does just the opposite.

U.S. policy, however, may violate international law. International law requires that refugees may not be sent back to a place where his or her life will be endangered. This principle of international law is so strong that it is considered a peremptory norm that no nation can violate. Despite this, the U.S. Supreme Court has held that Caribbean migrants intercepted at sea may be returned to their countries of origin without determination of whether they have legitimate fear of persecution. Presidents from Clinton to Obama have intermittently directed the Coast Guard accordingly. U.S. policies toward Caribbean migrants have been heavily criticized by other countries and are widely viewed as incompatible with international human-rights law and the practices of other civilized nations.

Sending migrants back to Cuba would violate international law if they will be endangered at home. Illegal immigration remains a crime under Cuban law. Since 1994, Cuba has agreed not to take legal action against those who attempt to emigrate, so long as they do not face other criminal charges. In practice, the U.S. State department has found that many of those who attempt to leave the island experience harassment and discrimination by the Cuban government.

Clarifying U.S. policy on Cuban migration will discourage Cubans from migrating for purely economic reasons. It will also ensure that the U.S. government complies with international law. To encourage Cuba to improve its human-rights record and commitment to the rule of law, the United States must lead the way by bringing its own policies toward asylum-seekers into compliance with international law.

Jill Goldenziel is a Lecturer in Government at Harvard University and a Research Fellow in the International Security Program at the Belfer Center for Science and International Affairs at Harvard Kennedy School. She is also a Visiting Assistant Professor of Law at the Boston University School of Law.