The Time Is Right: Why Japan and South Korea Should Get the Bomb 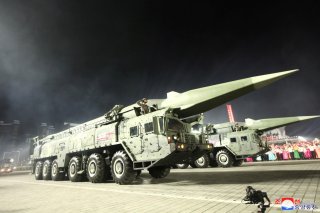 For more than half a century, one of the United States’ grand strategic missions has been to inhibit the proliferation of nuclear weapons. This strategic mission has been successful to the extent that the United States prevented the global spread of the most destructive, indiscriminate, and inhumane weapons. Since almost all U.S. allies believe in the efficacy of the U.S. nuclear umbrella, nuclearization is a pursuit of those beyond its reach.

However, the international security environment has changed dramatically in recent years. Above all, China and North Korea have expanded their capabilities to project military power globally, emerging as the biggest security threats to East Asian countries and the United States. As global hegemonic power is slipping through Washington’s fingers, the United States faces increased difficulties balancing the two new military aggressors alone.

It is time to pass the buck: the United States should allow South Korea or Japan to go nuclear. This buck-passing strategy could encourage one of the two countries to bear the burden of deterring or possibly fighting China and North Korea in East Asia before they cross the Pacific Ocean. Thus, the United States could share world policing with a wealthy Asian ally rather than allowing it to free ride.

Buck-passing is transferring the responsibility to act on an emerging bully, but it is one of the most well-conceived security strategies for a great power to check an aggressor while remaining on the sidelines. In a way, England and France assume buck-catching, as they take responsibility for thwarting military aggression of European and U.S. rivals in Western Europe; Israel plays the role of a buck catcher in the Middle East; and India and Pakistan catch the buck in South Asia. These buck catchers minimize America’s direct military involvement with potential aggressors. Regrettably, no country in East Asia, one of the most volatile regions in the world, is buck-catching. This is almost certainly a by-product of confusion over the rapid ascent of China.

I see four potential reasons the United States might prefer Japan as a strategic buck catcher over South Korea.

First, while developing its failed nuclear weapons program in the 1970s, South Korea “displayed a pattern of deception, manipulation, evasion, or even obstruction of the expressed [geopolitical] interests of” the United States. In contrast, Japan, whose national security is also at stake due to the threats from China and North Korea, has not shown such disrespect to the United States though it has retained the technical capability to go nuclear on short notice if necessary. Since Washington understands that “once a cheater, always a cheater,” it might perceive Seoul to be less reliable than Tokyo when push comes to shove.

Second, South Korea is politically less reliable than Japan since its fixed presidential term of five years often leads to policy inconsistency. When a conservative president is in office for five years, foreign policy tends to be in sync with U.S. interests so that Washington rarely has trouble addressing its security concerns in South Korea. But if a power transition occurs and a progressive president comes to power for the next five years, this tends to drastically change foreign policy, emphasizing the importance of national sovereignty and rejecting nuclear weapons as a viable security option. When a conservative president loses power, the United States must deal with a progressive president who is less compromising and even sometimes recalcitrant.

In contrast, Japan has been largely dominated by a conservative party, which has been in power almost continuously since its foundation in 1955. Japanese prime ministers are exceptionally cooperative, so they are more willing to accommodate any U.S. security needs in East Asia.

Third, since South Korea has greater economic interests in China in comparison to Japan, it might be more reluctant to balance the rising power of China on behalf of its American friends. In 2021, South Korea’s trade balance with China amounted to a surplus of about $24 billion. In contrast, Japan incurred a trade deficit of about $18 billion with China.

Fourth, when it comes to deterring or fighting China and North Korea, public opinion in South Korea might turn against the United States more strongly than in Japan. For example, since South Koreans view China to be much less threatening as a nation than the Japanese, they might be less willing to support a president entertaining America’s security agenda. This perspective can be inferred from March and April 2021 surveys by the Chicago Council on Global Affairs.

China and North Korea’s behavior has become increasingly provocative and assertive just as the United States’ once omnipotent military is faltering with an economy beset by economic challenges. This newly competitive security environment calls for an alternative to current U.S. grand strategy—the inhibition of nuclear proliferation, which is ineffective in countering the two growing security challenges in East Asia.

To contend with these threats, the United States should stop thwarting the independent nuclear weapons programs of its two key allies in East Asia. Buck-passing to a wealthy Asian country is an effective strategy to defend the westernmost front line of the Pacific. In an era of relative decline, the United States would do well to think about this approach on a global basis.