Time to Say Goodbye to Afghanistan 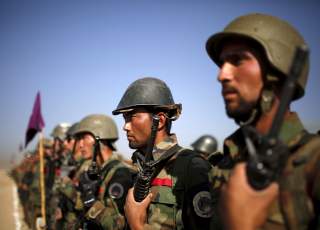 The window during which President Donald Trump can extricate U.S. forces from the mess in Afghanistan and blame his predecessors for the calamity is rapidly closing. A few more weeks, another surge, and he will be the third president to be saddled with this war; it will become his. The move to allow the military to determine how many more troops to send to Afghanistan would have been a wise one—let the professionals make such tactical decisions—if it reflected the president’s decision to stay the course. Such a decision would follow a review of the war involving not just the Pentagon, but also the intelligence community, the State Department and the staff of the National Security Council, among others. However, that is not the way this president makes decisions. He just left it to the Pentagon to sort out.

The Pentagon has its own agenda. It does not want to admit to having lost another war. It cannot wash its hands of what is happening in Afghanistan and blame its predecessors the way Trump can. At the same time, the Pentagon knows damn well that even when there were twenty times as many troops in Afghanistan as there are now, we did not win the war. The Pentagon seems set on just limping along, which seems better than admitting defeat. No wonder none of the generals refers to winning the war in Afghanistan; they use phrases such as, “creating stability” (Gen. Allen) and a V-Day for the War in Afghanistan “may never be marked on a calendar.” Retired Gen. David Petraeus expects us to fight in Afghanistan—for generations, adding “we have been in Korea for 65-plus years…”

Whatever drives the Pentagon to hold the course in Afghanistan, the reasons given for the surge do not pass the smile test. To argue that the Afghan forces need more training and advice after sixteen years raises the obvious question: why would one more year make a difference? Gen. Petraeus argues that the United States should continue its mission in Afghanistan “to ensure that [it] is not once again a sanctuary for al-Qaida or other transnational extremists, the way it was when the 9/11 attacks were planned there.” The argument that if we do not fight them there, we will have to fight them here is so threadbare it hardly conceals the hollowness of the argument.

First of all, the Taliban (which we organized and armed to fight the USSR) are not a transnational terrorist but a local insurgency. The terrorists who attacked the U.S. homeland in 2001 were not Taliban but Al Qaeda. True, the Taliban hosted them, but they were, for the most part, Saudis whom the Afghans considered foreigners. They did treat them as guests, in line with the very high value the Afghans put on hospitality. The Taliban paid a very heavy price for this mistake. There is no reason in the world to expect that they would seek to repeat it. They are fighting the United States because they want to run their country, not ours.

The notion that U.S. disengagement would turn Afghanistan back into a training base for terrorists also disregards the fact that most recent terrorist attacks in the West have been carried out by locals using makeshift weapons, like cars and knifes, trained (if at all) on the Internet. The suggested surge will do nothing to stop them. Also, now that ISIS has bases in at least half a dozen countries, if we are to deal with terrorists by occupying countries in which they may be trained—the United States shall need to occupy and stay in Libya, Syria, Iraq, Yemen, Somalia, parts of Nigeria and Mali, among other places. And the Taliban’s main training takes place in Pakistan, which we have not found a way to compel to help us stop the insurgency.

Last but not least, to repeat an often cited but still wise line, we need to be sure we do not create more terrorists than we kill. The civilian casualties that the war against terrorism causes is a major recruitment tool for those who seek to harm the United States.

In Afghanistan, we can safely let the Afghan people sort out their own fate. There and in other nations, the United States needs to work with moderate Muslims to counter the violent ones. Most of the job to protect us from terrorists will have to fall to the Department of Homeland Security, local police, vigilant citizens, and to mental health professionals and those who promote civility instead of hate. The Pentagon may find some consolation in the observation that the military is not losing the war in Afghanistan—merely the nation-building drive that followed a solid win in 2003 and the elimination of most Al Qaeda in the years that followed.

Amitai Etzioni is a University Professor and Professor of International Relations at The George Washington University. He is the author of Avoiding War with China, published by University of Virginia Press.