Time for a U.S.-China Partnership in the Middle East? 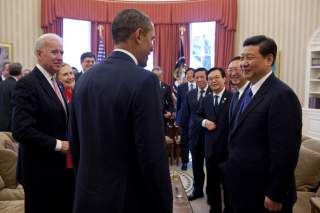 The unraveling of the Middle East in recent months has laid bare the need for a fundamental change in U.S. policy. While no silver bullet will fix U.S. policy in the Middle East, enlisting China as a partner in the region would be a good place to start. Such a move would not only help stabilize the Middle East, but could also improve Sino-American relations.

Under President Xi Jinping, China and the United States have pledged to forge a new type of great-power relationship. To date, this effort has largely focused on strengthening bilateral cooperation in the Asia-Pacific. This is sensible insofar as Asia is the most important region for both the United States and China, and especially for interactions between them. At the same time, it is also the region where their interests are most at odds, and thus where cooperation is most likely to remain elusive.

By contrast, America’s and China’s major interests in the Middle East are nearly perfectly aligned. Foremost among these is the free flow of oil. Since at least the 1970s, the free flow of oil in the Persian Gulf has been a core U.S. national interest. Although the United States is becoming increasingly energy independent, its interest in a prosperous global economy makes the free flow of oil a continued priority.

Even as America’s dependence on Middle Eastern oil wanes, China’s dependence on it grows. This year China is expected to surpass the United States as the largest petroleum importer, and Beijing will soon get over 60 percent of its oil supplies abroad. The Middle East will remain the focal point of China’s efforts to secure foreign oil. Already, the region accounts for over half of China’s oil imports. Despite China’s best efforts to diversify its energy sources, Beijing’s spiking demand will force it to rely on the turbulent region for the foreseeable future. Giving China a stake in the region is essential for reducing Beijing’s sense of vulnerability.

Although the U.S. position on Islamist terrorism has not changed much, China’s is undergoing a transformation. In the past, Beijing has been less than enthusiastic about America’s war on terrorism. This is changing quickly. Over the past year, there have been a number of high-profile terrorist attacks inside China, along with frequent small-scale ones. According to the Communist Party, these attacks are being orchestrated by members of the country’s Uyghur population, although they are no longer confined geographically to Xinjiang province, where China’s Muslim population is concentrated.

There is growing evidence that the Islamic State of Iraq and al-Sham (ISIS) is exacerbating China’s terrorism problem. To begin with, ISIS’s leader, Abu Bakr al-Baghdadi, has drawn parallels between his group’s war against the Iraqi and Syrian governments and the Uyghurs’ struggle against Beijing. Similarly, back in July, ISIS released a map showing the borders of its envisioned future Caliphate. Western China was among the territory ISIS covets.

This hasn’t escaped the notice of Beijing. Chinese officials have claimed that scores of Uyghurs are receiving training from ISIS in Syria, and have expressed concern that many will return home to carry out terrorist attacks. These claims have gained greater credibility in recent days as the Iraqi government says it has captured a Chinese national fighting alongside ISIS.

China’s growing domestic-terrorism problem and its ties to the Middle East are already producing a noticeable change in Chinese foreign policy. While Beijing is unlikely to directly participate in the U.S.-led military campaign against ISIS, it has been fairly enthusiastic in supporting it. This is a significant change for Beijing, which has a long history of reflexively criticizing U.S. military interventions in developing nations. That was certainly the stance China took towards America’s most recent intervention in Iraq in 2003.

Besides having similar interests, China and the United States complement one another nicely in the Middle East. On the one hand, the United States has distinct advantages in the political and military spheres. Through decades of heavy engagement in the region, America has established political relationships that China can’t soon match. It’s hard to imagine Beijing cobbling together a sizable coalition for a military campaign against ISIS. Similarly, despite consistent double-digit increases in military spending, China will not be able to independently project sustained military force in the region for decades to come.

Still, Beijing can complement U.S.-led political and military engagements. For example, China maintains working relationships with a number of important governments in the region that the United States shuns, such as Syria and Iran. The Palestinians also view China as a more impartial actor than the United States, and Beijing’s active involvement in the Middle East peace process could help unfreeze negotiations.

Similarly, while China cannot independently support long-term military interventions in the Middle East, it will be increasingly capable of participating in U.S.-led operations in the years ahead. This would not only reduce the burden America bears for these interventions, but would also help to improve mil-to-mil ties between China and the United States.

Just as the United States has clear political and military advantages over China, Beijing enjoys significant economic advantages over Washington in the Middle East. To begin with, it’s outward foreign direct investment is skyrocketing. Before 2006, China’s outward FDI averaged roughly $3 billion annually. In 2006, it spiked to $20 billion. It has continued climbing ever since, reaching $108 billion last year, a 22.8 percent increase from 2012. China is expected to become a net investor as soon as this year. And with investment opportunities drying up at home, and restrictions on investing abroad being lifted, China’s outward FDI is almost certain to continue increasing rapidly in the years ahead.

Furthermore, while America’s total global investment is still greater than China’s, Beijing is much more likely to make significant investments in the Middle East in the future. As already noted, China’s dependency on Middle Eastern oil is growing at the same time that America’s is evaporating. Moreover, state-run Chinese energy companies are not driven by market incentives, but rather by the Communist Party’s priorities. Stability tops the CCP’s priority list, and energy is essential to achieving that goal. As a result, these companies are far more willing than their American counterparts to make risky investments in geopolitically unstable regions. Indeed, this is how China “won” the second Gulf War. Chinese businesses are also willing to operate in more volatile environments than American companies. This risk tolerance will be essential in the years ahead, given the expected turbulence in the Middle East.

Finally, owing to its own experiences, China is better equipped to help Middle Eastern governments find sustainable economic models. The economic models of most energy-rich Middle Eastern states—whereby, the state uses energy revenues to employ citizens in unproductive jobs solely to maintain stability—are quickly becoming unsustainable in light of demographics trends. The most urgent task for much of the region—and particularly Persian Gulf states—is to develop new economic systems based on market forces and productivity. China is well placed at helping regional governments achieve this.

In short, the situation in the Middle East today is bleak, and the current trajectory is not promising. The United States cannot arrest this decline on its own, and no country can afford this decline less than China can. Forging a new type of great-power relationship begins in the Middle East, not the Asia-Pacific.

Zachary Keck is Managing Editor of The Diplomat where he authors the Pacific Realist blog. You can find him on Twitter: @ZacharyKeck.