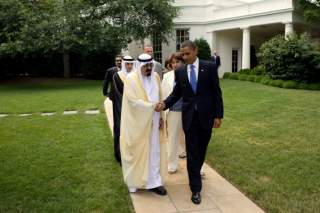 President Obama’s frustration with criticism that he has conducted an anemic foreign policy bubbled to the surface during his recent trip to the Philippines. In a press conference in Manila on April 28, his response was that while refraining from taking immediate actions on the ground “might not always be sexy”, his job is to manage the foreign policy of the United States with an eye towards the country’s long-term interests.

The president was correct to rebut the charge that he should be more aggressive in his responses to events, particularly when it comes to the turmoil roiling the Middle East. Past interventions by the current administration, such as the strong response in Libya, and the more tepid one in Syria, have been of debatable effectiveness and could even prove counterproductive in the long run. But the president has to go further than just defending his administration against the charges of some of his most partisan critics. Both his domestic detractors and supporters alike are demanding a roadmap, and U.S. allies in the Middle East are looking for signs of American leadership.

But the president appears to be caught on the horns of a true dilemma. How is it possible for him to articulate clear policies for dealing with the political situation in Egypt and the turmoil in Syria and Iraq, when the uncertainties are so great and the risks so high? He has tried being clear about U.S. policy in the Middle East in the past, with redlines, implicit threats and ultimatums. But then when conditions on the ground later change, making it difficult or even imprudent to make good on those statements, he has gotten pummeled for making his administration and the United States appear irresolute and weak. But on the other hand, when he has demurred and been more ambiguous about U.S. intentions, his administration has appeared disengaged and even feckless.

The president can escape this dilemma if he frames the debate and his strategy within a broader regional perspective. This means not just explaining the actions he takes, or doesn’t take, in Syria, Egypt or Libya, but also providing context for those decisions by articulating a clear vision and direction for his foreign policy towards the Middle East. It also means shifting from narrow, country-specific strategies to an overarching regional strategy.

The Rationale for a Regional Strategy for the Middle East

There are three compelling reasons to adopt a regional strategy now. Indeed, unless American strategic leadership seizes the moment, the region could slip further, and even inexorably, into a political, economic and social abyss.

First, the major threats in the Middle East today are regional in scope, transcend state boundaries and defy state-specific solutions. Militant groups like the Islamic State of Iraq and Syria (ISIS) and the al-Nusra Front, Al Qaeda’s local Syrian affiliate, are crisscrossing the borders of Syria and Iraq with impunity, in effect erasing boundaries between sovereign states that have been in place since the early twentieth century. Moreover, the conflicts in Syria and Iraq could bring Lebanon and Jordan to the brink of failure due to the pressure put on already stretched governments by a crescendoing deluge of refugees. Also, the economic carnage taking place in Syria, Iraq and even Egypt affects not just these countries, but also threatens the entire region, and could create negative spillover effects for the global economy.

Second, regional trends are taking shape right now before our eyes, and therefore can be acted upon imminently, whereas trends in individual countries like Syria and Iraq are impossible to discern amidst the fog of uncertainty and instability. In fact, it is important to understand that the conflicts in Syria and Iraq, where even short-term outcomes are unknowable and highly uncertain, are already shaping far more certain and predictable long-term regional outcomes, such as profound shifts in the distribution of power between Saudi Arabia, Iran, Turkey, Egypt and even Israel. In others words, while the ongoing conflicts in specific states are fluid and unpredictable, the landscape actually is more clearly defined when thinking about them using a broader regional lens. Another reason why regional trends are generally easier to forecast than state-specific trends is that the volatility created in the conflict areas gets diluted by the anchoring effect of the larger and relatively more stable powers in the region like Iran, Saudi Arabia and Turkey.

Third, a regional strategy matches the capabilities and interests of the United States better than do country-specific strategies. Direct U.S. interventions in specific conflicts have turned out poorly for countries like Libya, Iraq and Afghanistan, not to mention the economic costs, loss of life and reputational damage done to the United States. The United States has a greater capacity to positively influence the region and serve its own interests by stepping back and placing higher emphasis on the regional level, than it does by intervening at the country level. Its sprawling military footprint in the Persian Gulf, its critical role in international financial organizations, its hefty weight in global trade and finance, as well as its enormous diplomatic capabilities, gives Washington the capacity to set regional agendas, and use its convening power to bring regional and international stakeholders together on major issues—capabilities unrivaled by any other major power. Moreover, with a regional strategy, the United States would appear less intent on micromanaging, which would enhance its regional and international legitimacy and reinforce these capabilities. And a more comprehensive regional strategy could become part of the president’s narrative about how the United States will stay engaged in the Middle East, while also pivoting to Asia.

Given these imperatives, the three main pillars of a regional strategy that the president should adopt are as follows. (Since political stability and economic prosperity are closely intertwined in the Middle East, these pillars embody both political and economic recommendations.)

The first pillar is to shift the emphasis of U.S. policy towards working diplomatically with the more stable powers, like Iran, Turkey and Saudi Arabia, on conflict-mitigation solutions for the region. This approach would entail the difficult, but not insuperable, task of influencing the relationships between these more powerful and influential countries of the region, with the ultimate goal of defusing and stabilizing conflicts in Iraq and Syria and even the Israeli-Palestinian issue. Instead of trying to resolve conflicts in fragile, unstable countries directly, the United States would work indirectly through the major regional powers.

This initiative would include the United States taking the bold step of opening up a separate diplomatic track with Iran from the ongoing tenuous nuclear negotiations, involving discussions on the most dire issues facing the region, Syria being an immediate priority. The risk would be that despite efforts to keep the tracks separate, they get politically linked, making resolution on both the nuclear and Syrian issues more, not less, difficult. But the potential upside is tremendous, and it is also possible that the two different tracks, handled deftly by both sides, could be mutually reinforcing. And should the nuclear talks fail to culminate in a final agreement, this wouldn’t necessarily preclude pragmatic cooperation between the United States and Iran in areas where both parties have interests at stake, such as in Syria and Iraq.

As part of this pillar of the strategy, the United States should also use whatever traction is created in its relationship with Iran to work to defuse Iran’s tensions with Saudi Arabia, which has the potential to yield big payoffs in reducing tensions in Syria and Iraq and even with the Israeli-Palestinian issue; and these conflicts have been fed at least to some degree by the U.S.-Iranian rivalry.

Skeptics will argue that this part of the strategy is implausible, given the deep-seated schisms and hostility between Iran and Saudi Arabia. But it is important to keep in mind that while the historic rivalries between the two countries run deep, U.S. policies have exacerbated these tensions in recent years. The U.S. invasion of Iraq in 2003 and the toppling of Saddam Hussein created a vacuum through which Iran almost effortlessly projected power into the Arab world—a development that directly challenged Riyadh’s regional ambitions. Then when the Arab Spring erupted in 2011, tension between Iran and Saudi Arabia spilled over into competition for influence in Syria and Iraq, creating a proxy-war dynamic in these two countries. The United States further reinforced this tension by treating Saudi Arabia as a bulwark against Iranian ambitions. A shift away from the United States getting involved in local conflicts and any lessening of the U.S.-Iranian tensions could, with the help of effective U.S. diplomacy, have a salutary effect on the Saudi-Iranian relationship.

Another factor militating in favor of the United States being able to nudge the Saudis and Iranians to work together is the fact that the Syrian war has morphed into a nightmare scenario that undermines the interests of the two regional powers. Despite historic rivalries and the initial logics that drove each country to back opposing factions in this conflict, neither Iran nor Saudi Arabia has an interest in Iraq and Syria slipping further toward failed-state status, or in the conflict spreading and further destabilizing already fragile countries like Jordan and Lebanon. Moreover, further instability in Syria and Iraq could stoke tensions inside the Gulf Cooperation Council countries, including Saudi Arabia, which has its own internal frailties and leadership-succession challenges. The recent high-level talks between Riyadh and Tehran regarding Syria are evidence that both Saudi Arabia and Iran realize that the conflict in Syria has gotten out of control and threatens both of their interests.