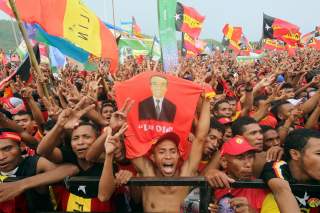 If the West truly believes in the power of democracy, they must commit to intervening where necessary and providing sufficient ongoing support to see success achieved. This is not to say that they should reflexively leap into every conflict. Hard questions should be asked about the execution of any intervention, and about the international community’s responsibilities once peace has been attained. Even in the case of Timor Leste questions should be raised about whether enough was done, or if its relative success meant that some support was concluded too quickly.

Despite its ongoing challenges, Timor Leste demonstrates that even in a relatively short time, post–conflict societies can become not only sustainable democracies but can provide an invaluable resource for other nations seeking to emulate their success. As domestic weariness of international engagement grows, Timor Leste is an important reminder to world leaders of the greater benefits that can come from a successful intervention.