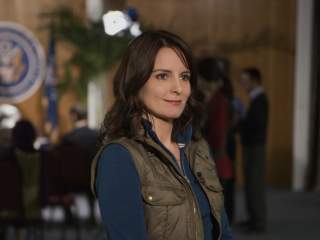 “Ladies,” my email began, “a Tina Fey movie about our favorite Area of Operations? Attention must be paid.” The message went to some of the women I had worked with at the Pentagon during my stint on the Pakistan desk. A movie about the last decade-plus of war starring a woman was rare enough, but a funny movie about it headlined by an actress we all admire was exciting. Before the four of us met up on the film’s opening night, I did a little homework to prepare for my cinematic experience.

What I found puzzled me. Review after review in the major national papers and Hollywood weeklies panned the film. It’s not surprising, of course, for critics to criticize a movie, but something about the language reviewers chose and the problems they had with the film sounded hollow. In describing the journey that Kim Baker, Tina Fey’s character, takes during her years covering Afghanistan as a reporter, the New York Times said she “generally gets her groove back.” The review also called an Afghan official who makes “advances” on her “goofily forward.” Rolling Stone (inaccurately, as it turns out) reported that to save her beau, Baker “puts out for the future Pakistan Prime Minister.” The reviewer in Variety accused the film of being too “playful” and avoiding hard issues. Many complained that it wasn’t funny enough, while a description of the movie as essentially a romantic comedy seemed unlikely.

Then I saw Whiskey Tango Foxtrot, and I wondered if those reviewers and I had watched the same movie. I admit that the jokes were fewer than the trailers suggest, and that many of them took some serious insider knowledge—my friends and I were the only people in the theater just two miles from the Pentagon to cackle uproariously at an absurd PowerPoint flow chart obviously generated by some hapless officer in the strategy shop. But it doesn’t take years of briefings to appreciate the movie’s tone, namely, a despairingly absurd observation of war as a female insider-outsider. It’s the kind of ideals-shattering experience that embedded correspondents (and Pentagon desk-jockeys) have trying to do good while in a compromised position. I watched in awe and recognition as Kim fended off sexual predation that is much more sinister than goofy, as she was admonished not to give any of the Marines she is embedded with “jobs of any kind,” and as she sank so deeply into an obsessive haze that it took her fixer-doctor to point out the similarities between her adrenaline addiction and less-celebrated chemical dependencies. When the lights came up, one of my friends turned to me and said, “I need a drink.”

I did, too—which I mean as a compliment. Whiskey Tango Foxtrot recreates the ambivalence of war itself, that concoction of slow-burning boredom, constant disappointment and hyper-drive survival that results in both going too fast to absorb it all and feeling too whiplashed to do so at any rate.

The movie was also very much about how a civilian woman experiences contemporary American conflict abroad. Women, after all, are in more places than ever—briefing the secretary of defense and the president, advising senior commanders and embedding with operators. Fey and the creative team around her portray those experiences with humility and compassion, not to mention with the hilarity, anger and confusion the experience breeds.

It’s true the storytelling raises questions that remain unanswered—what is the virtue of American military presence in Central Asia? Once you’ve pitched in, can you leave in good conscience? How should a woman handle the inevitable commentary on her sexual attractiveness with integrity yet without alienating others? How can she stay physically safe and still do her job? What do you owe yourself and how does that square with what you’ve taken from a foreign society to get it? But it is also refreshing—and not a failure—that the writer and directors did not have the conceit to offer their own solutions. They leave it all to sink in. Cursory viewers saw Fey’s character living happily ever after, calling it “a fairy tale.” More careful observers will see that the final scene is about learning to live with yourself and your memories with dignity and respect.

So why did so many critics miss the point? I think Whiskey Tango Foxtrot and the strangely tone-deaf reviews it has inspired reveal two persistent gaps in our understanding of ourselves in the context of the wars we fight.

First, there is a gulf between those who participated in Afghanistan and Iraq and those who did not. I don’t know the background of every film critic, but many of their reviews suggest to me a fundamental inability to recognize an accurate depiction of contemporary war, or at least a confusion of war with the glossy Hollywood versions that tend to trade intimacy for spectacle and fallibility for heroism.

Second, there is the lingering masculine bent to the way we tell war stories. The struggle to pigeonhole Fey as a rom-com girl while dismissing her sexual integrity and safety and criticizing the movie for not being funny or deep enough all belie a discomfort with how to view women in war—another topic attentive viewers will see addressed in the professional respect that grows between Fey’s character and Billy Bob Thornton’s Marine Corps general.

Thankfully, not every review was so myopic. TIME magazine complimented the film for examining the social implications of burqas, “from a respectful distance.” TIME was also the only review I found that pointed out Baker’s ability to access local women’s perspectives on a well-meaning but misguided U.S. project. I wish it didn’t seem relevant, but the reviewer was a woman.

Alice Hunt Friend spent five years working at the Pentagon, from 2009-2014, and thirteen months on the Pakistan desk. She is an Adjunct Senior Fellow at the Center for a New American Security and a Senior Associate at the Center for Strategic and International Studies.