Toward Armageddon: Israel, Iran and the United States Could End up in a War 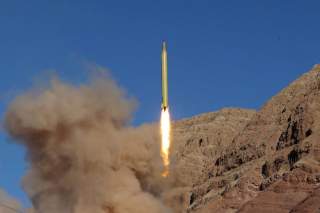 As May 12—the date for President Trump to make a decision on whether the United States will withdraw from the JCPOA—looms in the background, and the confrontation between Israel and Iran is reaching very dangerous levels. The escalation seems to be driven by Israeli calculations that a major Israeli military confrontation with Iran will overcome any residual hesitation the U.S. administration may have about reneging on the nuclear deal.

However, regardless of President Trump’s decision on the JCPOA, this game of chicken can be very dangerous. The Iranian regime, if pushed to the wall as a consequence of repeated attacks on Iranian targets in Syria, may lash out against Israel regardless of the consequences. Its credibility is increasingly under attack from domestic opponents who have become emboldened in expectations of the United States reneging on the nuclear deal thus exposing Rouhani and Zarif to ridicule.

Tehran is also likely to let loose its regional proxies, such as Hizbullah and Iraqi-Shia militia, to attack Israeli and American targets in the region without making any distinction between the two. American targets in Iraq and Syria are far more vulnerable to such attacks than fortified Israeli positions within its borders. Therefore, the likelihood of damage to American targets will be far greater.

Prime Minister Netanyahu’s dramatic PowerPoint presentation about the Iranian nuclear weapons program may be old hat for the knowledgeable. but is aimed at bolstering Trump’s resolve to walk out of the nuclear deal. In fact, without access to the intelligence reports at Netanyahu’s disposal, I had predicted as far back as 2011 that “it is time for world leaders to recognize the inevitability of Iran acquiring nuclear weapons capability, even if it remains untested, with Tehran following the policy and adopting the rhetoric of deliberate ambiguity.” It was the JCPOA signed in 2015 but agreed upon between the United States and Iran as early as November 2013 in Oman that prevented such an eventuality.

Nevertheless, Netanyahu’s latest statement reiterating known facts about Iran’s nuclear program has been music to President Trump’s ears and to those of his closest advisors on the issue: Secretary of State Mike Pompeo and National Security Advisor John Bolton. Both of the new appointees reinforce the president’s visceral dislike of Iran and, even more, of the JCPOA negotiated by his predecessor Barack Obama. Their appointment in the run up to May 12 had sent the clear message that President Trump has decided to renege on the deal.

America’s European allies have drawn exactly the opposite lesson from Netanyahu’s disclosures. They have made the point publicly that this endorses their position that had it not been for the JCPOA Iran would have raced toward acquiring nuclear weapons capability and either succeeded or landed the world in a major conflagration with unpredictable outcomes. To them the JCPOA is the kingpin in the strategy to prevent Iran from going nuclear anytime soon. Reneging on it would expose the world once again to the same dangers.

While the Europeans, especially France, are willing to entertain the idea of renegotiating the deal with Iran to keep Trump on board, it is widely recognized that the Iranian government is firmly opposed to doing so. The political climate in Iran has reduced any wiggle space that the Rouhani-Zarif duo may have had on the nuclear issue. Trump’s anti-Iranian rhetoric is the primary factor undermining the Rouhani administration’s credibility within Iran. Any show of weakness by the Iranian government at this stage will spell doom for it and return Iran to an undiluted hard line regime that would make Ahmadinejad look like Mahatma Gandhi.

Tehran has two options left. One, continue with the implementation of the JCPOA ignoring America’s withdrawal since as Foreign Minister Zarif has argued Washington under Trump was never a serious party to the deal. This would isolate the United States and divide the western alliance if the Europeans continue to honor their commitments to the JCPOA.

However, an American withdrawal will probably hobble that deal beyond repair. The American and European economies are so closely intertwined that American threats of sanctioning European firms dealing with Iran are likely to scare off most European entities interested in dealing with Iran.

Moreover, as it is Iran has not begun to receive the substantial economic benefits it had expected from putting its nuclear program in cold storage as a result of American foot-dragging. The financial returns are minimal, certainly not enough to balance the political negatives for the Iranian government to stick to a hobbled deal.

This is where the second options kicks in. Iran could decide to withdraw from the JCPOA following the American withdrawal, declare it null and void and end the intrusive inspections tied to the agreement. It would be extremely difficult for the other parties to the JCPOA to hold Iran responsible for scuttling the deal and to reimpose sanctions if Tehran takes this step in response to the American withdrawal.

This is where the million-dollar question arises. Will Iran stop at withdrawing from the JCPOA or, using the American withdrawal from it as a justification, disavow the NPT as well. This has now become an open question in light of opposition demands that Tehran leave the NPT that has unnecessarily shackled its nuclear program without providing adequate compensation.

Withdrawal from the NPT and racing for the bomb is likely to appear increasingly attractive to the Iranian elite in light of the United States refusal to stand by its commitment to the JCPOA. Iran’s mastery of the nuclear cycle, and the knowledge its scientists have gained from operating its various nuclear facilities, are unlikely to have been lost despite the temporary freezing of its uranium-enrichment program under the terms of the JCPOA. As the Iranians have said over and over again their nuclear enrichment program can be restarted with redoubled vigor within “hours” of such a decision being taken.

Equally important, the principal lesson that Iran is likely to have drawn from America’s decision to negotiate with North Korea at the highest level, while threatening Iran both with withdrawal from the JCPOA and the imposition of new sanctions, is that it is North Korea’s nuclear arsenal and delivery capabilities that have brought the American president to the negotiating table. It is now coming to be generally accepted in Iran that had Iran developed nuclear weapons instead of signing away its right to do so, the American president would have gone running to Tehran to negotiate a nuclear deal more favorable to Iran than the JCPOA. It is difficult to refute this impression in light of President Trump’s actions in relation to North Korea as compared to Iran. As one analyst put it succinctly, “North Korea has shown how to play nuclear poker with Trump—Iran may follow suit.”

Where does all this leave us? There is a good chance of an impending full-scale war between Israel and Iran (and its proxies) that in all likelihood will drag in the US as well. Whether this happens or not, there is an even better chance of Tehran withdrawing from both the JCPOA and the Nonproliferation Treaty (NPT) as a result of America’s reneging on the JCPOA. The withdrawal from both seems to have now become intrinsically intertwined in the Iranian psyche as there is growing realization that merely withdrawing from the JCPOA will not serve Iran’s purpose of acquiring nuclear weapons capability. It is essential that all IAEA inspections be terminated for that to happen. The North Korean example has driven home the point to Tehran that withdrawal from the NPT is essential in order to build Iranian nuclear capabilities and bring the Americans back to the negotiating table.

If Tehran decides to renounce both the JCPOA and the NPT, then it will introduce an unprecedented degree of uncertainty into the already volatile politics of the Middle East. The United States will have to engage in a major war—not just from the air but on the ground as well—with Iran in an attempt to get it to reverse its course. This could turn Iran into a Vietnam and Afghanistan combined for the United States sucking Washington into an unwinnable morass. Alternatively, it would mean the United States accepting the unpalatable reality of a nuclear Iran after having expended a lot of bombast to the contrary. Such an outcome is also likely to have very negative consequences for its credibility among allies and adversaries alike.

Image: A ballistic missile is launched and tested in an undisclosed location, Iran, March 9, 2016. REUTERS/Mahmood Hosseini/TIMA​