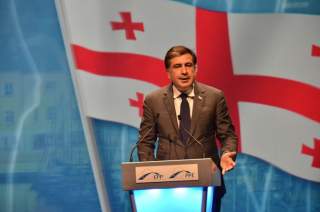 In August 2008, Georgia stumbled into war with Russia. President Mikheil Saakashvili ordered Georgian troops to retake South Ossetia. Russian president Vladimir Putin pounced. Georgia was defeated. Ever since, it has been stuck in what is widely known as a “frozen conflict” with Moscow.

Currently, Georgia is experiencing internal political tumult. Prime minister Irakli Garibashvili has fired the popular defense minister Irakli Alasania. The latter says the brouhaha, which includes investigations of his ministry, is an attempt to quash a pro-European course. In response, Garibashvili, the Economist reports, called him a “traitor.”

Former Georgian foreign minister and current chairman of the Foreign Affairs Committee of the Georgian parliament Tedo Japaridze is a close observer of these events. He stopped by the National Interest to discuss them. Realistic, calm and shrewd, Japaridze talked about everything from Saakashvili’s career to the legacy of Josef Stalin in Russia and Georgia. A 1971 graduate of the University of Tbilisi, he speaks Russian, Spanish and English. He currently belongs to the “Georgian Dream” party.