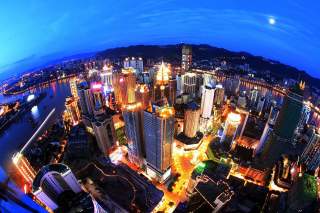 China’s growing power has generated considerable angst within the United States and its allies, who fear an expansionist China might seek to upend the regional order. However, the more interesting, often ignored, story in Chinese foreign policy is that of economic institution building. China wants a say in the global order reflective of its size and wealth—and prefers to achieve this through economic means, not military. To this end, it is attempting to reshape the global economic system through trade and investment partnerships, development institutions and foreign aid.

In a trip to China last month as part of the Harvard Kennedy School’s U.S.-China Study Group, I travelled to Beijing, Chengdu and Shanghai, meeting with ministry officials, provincial representatives and think tanks. Without exception, they consistently underscored forging economic partnerships and developing international institutions as the centerpiece of China’s foreign-policy vision.

The ambitious economic initiatives that have become part and parcel of this approach were highlighted in the Belt and Road forum held in Beijing. The forum brought world leaders together to discuss China’s Belt and Road Initiative (BRI), which was launched in 2013 to economically connect Asia and Europe through infrastructure investment and trade partnerships.

Shen Yamei, deputy director at the China Institute of International Studies, a Foreign Ministry–affiliated think tank, noted that BRI has grown to a bigger scale than expected. The BRI currently includes over sixty countries, with which China has conducted $3 trillion in trade between 2014 and 2016, according to Li Yong, vice chairman of the China Association of International Trade. China has also invested $50 billion and Chinese firms have generated 180,000 new jobs in twenty of these nations.

In addition to BRI, China has invested in a set of new economic institutions, including the New Development Bank (NDB) and the Asian Infrastructure Investment Bank (AIIB), to fund development in areas perceived to be underserved by the World Bank. This is supplemented through foreign aid offered with a no-strings-attached policy, particularly in sub-Saharan Africa.

There are several driving factors behind these initiatives. First is the recognition that China has benefitted tremendously from globalization, and would benefit even more by constructing the architecture to stimulate further integration. According to Shen, this is particularly true now that Europe and America, “the heart of the liberal international order, are questioning the benefits of globalization.” Second, these investments provide an outlet for China’s $3 trillion in foreign reserves, which had in the past been invested in U.S. treasuries at low yields. Shen even suggested that part of the private funding for President Trump’s $1 trillion infrastructure plan could come from Chinese investors.

Furthermore, China has long expressed frustration with its relatively undersized role in existing global economic institutions, given its size and economic strength. Dr. Yang Jiemian, president emeritus of the Shanghai Institute for International Studies, noted that the IMF and World Bank were both created and dominated by the West, and continue to have relatively few Chinese employees, even compared to other developing nations like India and Pakistan. “In the U.S., I learned that money talks. China has money, but the U.S. still talks. President Obama said in public many times that America should make the rules. To me, that’s very unreasonable.”

However, Yang said that China did not intend to replace these institutions. “Even if we set up new institutions like AIIB, we still work with the existing organizations. At the Belt and Road Forum, we invited the leaders of the World Bank and the IMF. We made it clear, we don’t want to replace, we want to work with you.” He notes that the United States was invited to participate in both BRI and AIIB, but declined, although many U.S. allies joined the latter.

An environment of peace is a precondition to bringing these efforts to fruition, and so the Chinese have focused on preventing any major conflict that could derail the process. Shen notes, “We want to create a more peaceful environment for all the cooperation initiatives to move forward, so we will not be happy to see irritants,” including allies like North Korea, whose recent nuclear and missile tests have spurred a crisis in the region.

It is worth noting that in absolute terms, the funds invested are still relatively small: $30 billion to the AIIB, $41 billion to the NDB and approximately $50 billion to BRI nations. However, the broader vision is a compelling one, particularly for poorer nations, which see cooperation with China as a way to fast-track their development.

As the United States and China inevitably find themselves competing economically in the coming decades, the United States would do well to find a similar positive economic vision that can offer a credible alternative.