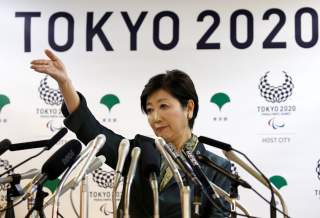 Tokyo governor Yuriko Koike’s emergence as Japan’s most popular politician has sparked speculation that she is destined for higher office. However, the odds are stacked against her becoming the nation’s first female prime minister, despite the recent stumbles of Japanese Prime Minister Shinzo Abe.

Koike’s rise follows her election in July 2016 as Tokyo’s first female governor, in which she stunned the establishment by trouncing the candidate of Abe’s ruling Liberal Democratic Party (LDP). Running on an anticorruption, pro-environment platform, Koike won nearly 45 percent of the vote in Japan’s capital city compared to the 27 percent support obtained by the LDP’s Hiroya Masuda and the 21 percent won by leftist opposition-backed Shuntaro Torigoe.

Ironically, Koike originally entered the race as an LDP candidate, having been a member of the party since 2002 and serving in cabinet posts, including as environment minister and defense minister. However, she ran as an independent in the Tokyo poll after the party’s Tokyo chapter backed Masuda instead.

Having tackled issues such as overspending for the 2020 Tokyo Olympics and a scandal over the proposed relocation of the Tsukiji fish market, Koike cemented her grip on power after a sweeping victory in the July 2 Tokyo Metropolitan Assembly election.

“Rather than a victory for Tokyo Citizens First, this is a defeat for the LDP,” said former Defense Minister Shigeru Ishiba, seen as a rival to Abe inside the ruling party.

Japan’s political history indicates that the Tokyo election is often a precursor for changes at the national level. In 2009, the LDP’s historic fall from power was preceded by a crushing defeat in the Tokyo poll barely two months earlier.

Having led Japan since December 2012, becoming the nation’s third-longest serving prime minister in the postwar era, Abe’s grip on power suddenly appears fragile. Recent public approval ratings for Abe’s Cabinet have slipped below 30 percent with his disapproval rating reaching nearly 49 percent, amid influence-peddling scandals that have delivered Abe’s worst ratings since his re-election in 2012.

Abe’s support has also been dented by the railroading of an antiterrorism bill through the Diet, while Defense Minister Tomomi Inada, once seen as a potential female leader, was forced to resign over a cover-up concerning the activities of Japan’s Self-Defense Forces in South Sudan.

However, Koike’s support also slipped in the lead-up to the Tokyo poll, dropping from 74 percent in April to 59 percent in June. But after telling the city of 11 million people that “we can’t revolutionize Tokyo unless we rejuvenate this very, very old metropolitan assembly,” national politics still has considerable barriers to a female-led rejuvenation.

Despite recent moves by the Abe administration to advance female empowerment in the labor force and elsewhere, known as “Womenomics,” Japanese politics remains a male bastion.

Women account for less than 10 percent of the 475 members of the lower house, placing Japan 157th out of two hundred countries ranked by the Inter-Parliamentary Union, below even Saudi Arabia and South Sudan. The number of Japanese female lawmakers in the lower house has barely changed since 1946, the first time Japanese women could run for office.

Similarly, only 3.5 percent of senior government posts are held by women, despite moves by Abe to ensure women hold at least a third of senior positions in government and business by 2020.

Instead, leadership speculation has centered on Foreign Minister Fumio Kishida, Ishiba and Finance Minister Aso, himself a former prime minister.

Meanwhile, opposition Democratic Party leader Renho Murata, who was once touted as a potential future prime minister, resigned her leadership July 27 following lackluster polling in the Tokyo and other elections. Born to a Taiwanese father and Japanese mother, Renho also attracted criticism over her dual nationality, despite stating she had renounced her Taiwanese citizenship.

Other female contenders for national leadership have also emerged in the past, only to see their aspirations quickly dissipate.

These have included the nation’s first female Foreign Minister Makiko Tanaka, the daughter of former Prime Minister Kakuei Tanaka, who rose to prominence under Koizumi’s leadership but was fired from Cabinet in 2002 and later expelled from the LDP. Despite regaining high office in 2012 as education minister under Democratic leader, Prime Minister Yoshihiko Noda, Tanaka lost her seat in the December 2012 election that saw Abe’s return to power.

More recently, the LDP’s Yuko Obuchi was described in glowing terms as “the next prime minister but one” after her appointment as economy minister by Abe in September 2014.

“With a telegenic presence, powerful ruling party mentors and a talent for avoiding making political enemies, new trade and industry minister Yuko Obuchi may have what it takes to become the country’s first female prime minister,” Reuters reported in October 2014.

However, barely a month after her elevation to the powerful ministry, Obuchi quit following a political donations scandal, further reducing the pool of qualified female successors to Abe.

Can Koike break the mold? The charismatic leader has described Japan as having an “iron plate” rather than a “glass ceiling” confronting female advancement.

Amy Catalinac, assistant professor at New York University, suggests Koike could yet challenge for the top job, should she maintain her popularity.

“Over the past year, she has demonstrated an extraordinary capacity to maintain a high approval rating as governor while forging a relationship with Komeito and recruiting, nurturing and convincing voters to support talented candidates. She has kept herself in the headlines with her platform of challenging entrenched interests and has carved out policies that could hold appeal beyond Tokyo,” Catalinac said in the East Asia Forum.

“If Koike can make Tokyo’s 2020 hosting of the Olympics a success and parlay that into even higher visibility, she may well find herself the most attractive candidate for prime minister, whether for the LDP or another centrist party.”

Nevertheless, Abe still has time to revive his political fortunes, with the next LDP leadership election slated for September 2018, followed by general elections. The center-right party’s impressive record in winning the most votes in nineteen of the last twenty lower-house elections suggests Koike’s young party faces a formidable foe.

However, Koike follows in the footsteps of South Korea’s election of its first female president in 2013, a move seen as breaking tradition in a similarly patriarchal society.

“I am in awe to see that when individual votes become one, it can turn into a huge wave,” Koike told reporters after her recent election victory.

The LDP’s history of reinventing itself suggests the party might still seek to reach out again to Koike, despite comments by the party’s Tokyo head that it had “no intention” of taking her back. Like Abe, Koike has supported moves to revise the war-renouncing Article 9 of the constitution and is considered a hawk on foreign-policy issues such as the U.S.-led war on terror, making her a natural ally of Washington.

For now though, the sixty-five-year-old Kobe native has stressed her focus on “making Tokyo great again,” rather than pursuing the national stage. Koike also faces considerable challenges in ensuring her popularity does not diminish, amid the city’s budget challenges in hosting the Olympics and the on-again, off-again Tsukiji relocation.

However, with new female leaders such as Koike on the rise globally, Abe’s 2014 pledge of making Japan “a society in which women shine” could yet prove more prescient than he intended.