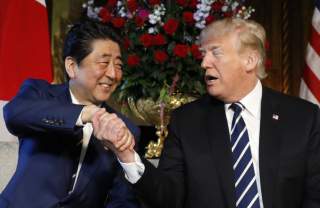 With the KORUS agreement in principle reached late last month, and NAFTA possibly following suit soon, Japan faces a realistic prospect of being forced into a bilateral FTA with the United States despite its best efforts to prevent it. The fact that KORUS is not as draconian as implied by some of U.S. resident’s statements and that the United States is currently engaged in a trade showdown with China over tariffs may do little to alleviate Japan’s worries. Trump’s recent comments that the days when Japan and other countries take advantage of the United States “are over” confirms that he continues to view Japan as an economic archenemy for the U.S. Abe’s wild bet to use his close personal relationship with the U.S. president to advance his country’s economic and security goals is not looking very good at the moment. The silver lining of the current situation is that recent U.S. decisions may make the EU and CPTPP partners even more eager to work with Japan to finalize and adopt their respective mega-trade deals.

How are things likely to progress for U.S.-Japan relations? Abe will clearly be doing damage control during his U.S. visit, careful to make sure that Japan is not sidelined again. Despite calm appearances and the cosmetically close personal relationship between Trump and Abe, there has been a growing sense of unease in Tokyo since Trump’s election. The recent decisions on tariffs and North Korea in early March have validated these concerns. However, despite this challenging time in the alliance, the structural conditions and interlinkages based on shared economic and geopolitical interests will likely keep the United States and Japan together. The mercurial U.S. president is no stranger to changing his mind, and the outcome of his summit with the North Korean leader could bring him closer to Abe’s hardline perspective once more.

For Abe, however, the setback is more serious as he continues to fend off internal rivals within his ruling Liberal Democratic Party encouraged by the prime minister’s sinking approval rating related to an expanding graft scandal. Up until this point, Abe’s diplomatic successes and management of security issues—including the U.S.-Japan alliance—had been one of his main selling points. Since the success of Japan’s good standing with the U.S. president seems dependent on a good personal relationship between the two nation’s leaders, a potential new Japanese leader would be a wild card in this delicate process. While not necessarily the most popular politician at home, Abe has by and large been good for his country’s foreign policy. Not only has he provided the stability needed after many years of quick succession of Japanese prime ministers, but under his leadership Japan has taken a more proactive stance in trade and foreign policy, reaching out to likeminded allies in the neighborhood and elsewhere, particularly in Europe.

J. Berkshire Miller is a senior visiting fellow with the Japan Institute of International Affairs, based in Tokyo. He is also a distinguished fellow with the Asia-Pacific Foundation of Canada.