Tolerating the Intolerant: Why America Must Come to Terms With Itself Over Syrian Refugees 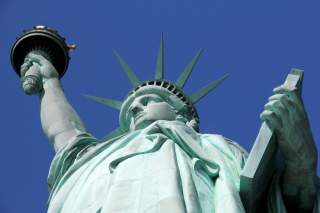 Americans are divided over how to respond to the Syrian refugee crisis. Should the United States accept more of those fleeing the brutal armies of Bashar al-Assad and the Islamic State, or are there legitimate security reasons for closing America’s borders? After much feuding, both sides of this debate now seem to be firmly entrenched in their positions, and it is difficult to foresee the capitulation of either. Lacking a national consensus, President Obama seems intent on using his powers to press ahead with accepting more refugees. In the long-term, however, he and his supporters must not shirk from building broad support for a sustainable humanitarian response.

Broadly speaking, opinion polls show that most Americans oppose accepting Syrian refugees out of fear that terrorists will be able to conceal themselves as displaced civilians and thus enter the country bent on doing violence. Such attitudes are mirrored in the words and deeds of elected officials. More than half of U.S. governors have refused to accept refugees from Syria, and candidates for the Republican presidential nomination continue to tout ever more extreme measures to deal with the supposed threat of Islamic terrorists disguising themselves as migrants.

Those advocating that the United States can and should safely accept tens of thousands of Syrian refugees are understandably exasperated by this groundswell of opposition. With proper checks in place, they say, there is no risk of terrorist infiltration. And far from representing the legitimate fears of ordinary citizens, politicians arguing for the denial of sanctuary to people fleeing from warzones are actually the ones responsible for stoking Islamophobia in the first place, using the specter of a Paris-like attack on U.S. soil as a political football and a cynical electoral tactic.

It is true that the case for admitting more refugees is compelling along several dimensions. As President Obama has pointed out, there is no reason to believe that people coming into the United States as refugees pose a greater security risk than the millions of other people who already pour into the country each year as tourists, students, businesspeople and other migrants. On the contrary, refugees undergo a uniquely extensive period of vetting that makes them particularly unlikely to pose a threat. And in the long-term, refugees have a long and venerable history of becoming net contributors to the U.S. economy and society.

In foreign affairs, too, accepting Syrian refugees makes good sense. Showing compassion in this instance might help to improve Washington’s tattered image abroad—especially in Islamic countries, but also among America’s European allies who have already accepted many thousands of refugees from Syria and elsewhere and understandably feel as though others should be taking on more of the strain. Displays of cold-heartedness, xenophobia and Islamophobia are unlikely to do much to improve waning U.S. “soft power.”

But despite the force of these arguments, fear and nativism stubbornly cloud the debate on Syrian refugees. Rightly or wrongly, a majority of the American people seems not to have been sold on the idea of accepting tens of thousands of mostly Muslim migrants at a time when they fear for their own security. There is an “us” versus “them” mentality, and “they” are not to be trusted. So how can a long-term humanitarian response to the refugee crisis be implemented in the face of such seemingly implacable opposition?

The answer is that it cannot. For while America’s governors might lack the constitutional authority to block the arrival of Syrian refugees, they and the people they represent certainly have the power and influence to make life difficult for refugees if and when they arrive on American soil. Welcoming the victims of war into a hostile and nativist environment would be no welcome at all. How can people be resettled in a climate of fear, distrust, and misunderstanding? Practicality demands that some sort of compromise, some sort of accommodation, must be found.

As sick as it might make them feel, then, America’s humanitarian contingent—President Obama and his would-be Democratic successors among them—probably need to work with, not against, the opponents of accepting refugees to some degree. In other words, more refugees from Syria should be brought into America but more also needs to be done to cater to the fears that many Americans harbor—whether or not such fears are judged to be objectively reasonable.

Like it or not, many in America today are scared of refugees or otherwise have found reasons to dislike them. Some conflate refugees with Islamists. Others are unashamedly intolerant of Islam itself. Whether such beliefs are held out of ignorance, bigotry or simply because there is an over-supply of such ideas in the popular media and in the routines of craven political entrepreneurs is of little consequence at this point: the beliefs themselves have become hardened political facts, widespread among lay people, and as such constitute bona fide barriers to the country accepting more refugees in a hospitable and generous fashion.

Telling people who are anti-refugee that they mad, bad or bigoted will be no good. Americans who assess refugees to be a threat to national security are not ashamed of their views; they believe that their fears are warranted and legitimate. To them, if just one out of 65,000 migrants proves to be a violent criminal then this is a risk not worth taking. Attempts to convince them otherwise are noble endeavors, perhaps, but ultimately are unlikely to dull the deafening cacophony of fear.

Instead, peoples’ fears must be addressed and people who hold such fears must be made to feel listened to. This need not mean indulging the likes of Donald Trump and Ben Carson, politicians whose “proposals” for dealing with Syrian refugees and Muslims in general go far beyond the strictures of liberalism and have rightly begun to be discussed in terms of outright fascism. But it does mean listening to the millions of ordinary Americans who might simply be scared, and who do not yet understand why they should not be.

Refugees from war zones like Syria must be provided sanctuary. America can and should do more. But the country cannot move forward and fulfil the entirety of its promise unless there exists a broad enough national consensus in favor of compassion and generosity. In the coming weeks and months, it is critical that more work is done to understand and empathize with the opponents of accepting refugees. Their acquiescence will eventually be required. Empathy and compromise, after all, are unavoidable in a tolerant, liberal society—that is, the kind of society that refugees have historically wanted to live in.