The Top 10 Global Security Risks and Opportunities in 2021 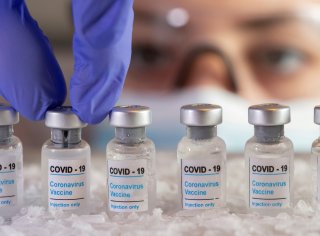 It’s not being called the “year from hell” for nothing. The pandemic, the kind of “gray swan” event that is predicted but never pinpointed in time, finally came calling in 2020, aggravated by deepening political division and tribalism. International institutions continued to fragment, with the United States withdrawing from the World Health Organization right in the middle of the plague and engaging in obstructionist behavior in other multilateral organizations.

Yet there were rays of light in the abyss of darkness. Democracy prevailed in the U.S. presidential election, even as the U.S. political system remained polarized and dysfunctional. In a surge of spectacular innovation, aided by artificial intelligence and big data, scientists created coronavirus vaccines with stunning alacrity.

It’s tempting to say that in 2021, there’s nowhere to go but up. But there will be further unanticipated shocks and no shortage of risks. Drawing on years of foresight experience at the U.S. National Intelligence Council, we two national security experts have identified the top ten risks in the new year for the United States and the global implications surrounding them. We’ve attached a probability to each potential scenario with a “medium” denoting that there is a 50/50 chance the scenario will occur in the coming year. The risks are ordered by their level of relevance to the United States and the rest of the world. Additionally, in the spirit of optimism for the new decade, we’ve made an addition this year: ten opportunities in the coming year for the new U.S. administration, beginning with the most important and using the same probability scale for each potential scenario.

1. The Coronavirus Crisis Deepens Amid a Slow Vaccine Rollout

The coronavirus, also known as COVID-19, will continue spiking in the United States, the European Union, and Russia, with the consequences from holiday travel, gatherings of family and friends, and widespread pandemic fatigue likely extending into 2021. Many could further let their guards down in anticipation of receiving vaccines. Unfortunately, the vaccine distribution process could encounter unexpected production and logistical problems, pushing back the timeline for when the bulk of the public can be vaccinated. In the United States, in particular, polls show that 42 percent of Americans aren’t interested in receiving one of the vaccines, which could lower the chances of stopping the contagion until well into the second half of 2021. International travel restrictions will remain in place for much of 2021 since the distribution of the vaccine overseas, particularly in developing nations, will likely be spotty. The virus also continues to spread and mutate, potentially limiting vaccine effectiveness.

2. The Biden Presidency Is Stifled

Joe Biden’s ability to govern will be constrained, especially if Republicans retain control of the Senate. In his last days, President Donald Trump is making it as difficult as possible for his successor. Treasury Secretary Steven Mnuchin has already returned $455 billion in recovery funds to the government. Now, Trump is newly threatening China with additional arms sales to Taiwan and Iran with more sanctions, while he withdraws the United States from the Open Skies Treaty in an effort to further dismantle arms-control measures. Polls show some 70 percent of Republicans believe the election was stolen from Trump and that the Biden presidency is illegitimate. Trump could be a thorn in Biden’s side for the next four years, particularly if he announces another run for the presidency. Meanwhile, progressives will pressure Biden from the left, draining support for his administration among moderates.

3) Another Global Financial Crisis, Driven By Debt, Breaks Out

Global debt from emergency coronavirus spending, especially in developing economies, is exploding. Total debt increased by $15 trillion in 2020 and is expected to reach 365 percent of global GDP by the end of the year. To date, the International Monetary Fund (IMF) has had to disburse pandemic-driven financial aid to eight-one countries. Additionally, capital flows to low-income countries are projected to drop by $700 billion from 2019 levels in 2020. Developing economies need $7 trillion to repay debt by the end of 2021. Zambia is the sixth nation to default in 2020. Such financial distress could spark yet another global financial crisis. In an effort to stem the growing crisis, the Group of Twenty (G20), which includes China, has created a “Common Framework” to manage debt relief, but U.S. congressional reluctance to approve any new resources for the IMF could undermine G20 efforts.

The IMF and Organisation for Economic Co-operation and Development (OECD) recently reduced their original estimates for 2020 of the downside economic damage that the coronavirus will do to the United States and other countries, but most of the world won’t get back to a pre-2020 GDP even by the end of 2021. Only one major economy—China—will experience significant growth (almost 2 percent) in 2020, ending up 10 percent larger by the end of 2021. The situation could become worse for the West if there’s inadequate fiscal stimulus. Many economists believe the slow U.S. recovery from the 2008 financial crisis was partly due to the premature withdrawal of stimulus and an emphasis on deficit-reduction starting in 2010. In Europe, post-2008 austerity measures exacerbated the problem of slow growth. Keep in mind that the 2008 financial crisis spawned the ongoing populist surge in the United States and Europe. Once again, the darkening financial prospects of millions of citizens, pushed down just when they started to get back on their feet, could lead to even worse longer-term political repercussions.

When it comes to addressing the nuclear threat from North Korea, Biden will inherit the failed diplomatic legacies of the past four presidents. Despite Trump’s three meetings with Kim Jong-un, North Korea now boasts an even more capable nuclear-weapons arsenal, including some twenty to thirty bombs and intercontinental ballistic missiles that may soon be able to reach the U.S. mainland. The pattern in the past has been for new American presidents to be greeted with a North Korean provocation in the form of either a missile or nuclear test. Expect one in the first quarter of Biden’s presidency. Such a demonstration will prompt the media and Congress to pressure Biden into doing something. It will raise tensions and likely lead to a pseudo-crisis that could spin out of control. Kim is not suicidal; U.S. deterrence still works with him, though it needs to be strengthened in the face of new and emerging North Korean capabilities. The Biden administration will be most effective in this regard if it avoids saber-rattling. It should, instead, pursue multilateral opprobrium and work with South Korea and Japan to enhance deterrence.

6. The Confrontation Between the United States and Iran Intensifies

Israel’s suspected assassination of Iran’s top nuclear scientist plus Trump’s possible heaping-on of sanctions before leaving office could poison the well with Iran, thwarting Biden’s hope of rejuvenating the nuclear deal. In Iran, there is widespread anger at the United States and Europe, and a debate over the next steps ahead of presidential elections, which are scheduled for June. Should Supreme Leader Ayatollah Khamenei follow through on his vow to retaliate—against Israel, the United Arab Emirates, or Saudi oil facilities—before January 20, then it could trigger a strong reaction from the Trump administration, such as bombing the Natanz nuclear facility. This could, in turn, spark an escalatory cycle between Washington and Tehran, undermining Biden’s diplomatic aspirations. An effort by the United States to return to the nuclear deal would be based on an Iranian reversion to the status quo ante plus a willingness to expand the old agreement. A “more-for more” negotiation to extend timelines on halting Iranian nuclear activities, freezing missile development, and halting missile sales, along with a winding down of the war in Yemen, in exchange for easing UN sanctions against Iran, could begin to rebuild a modicum of trust among the parties to the nuclear deal. But that scenario is far from a certainty.

7. The United States and China Clash Over Taiwan

Taiwan may be where tensions in the U.S.-China relationship reach a denouement. A negative dynamic has escalated over the past year or so. Each time the United States has supported Taiwan—through arms sales, high-level official visits, and military exercises—has led China to ratchet up pressure on the country with near-daily air and sea intrusions. Taiwan is an existential issue for the Chinese Communist Party. If the U.S.-China confrontation continues to worsen, then Chinese president Xi Jinping may feel compelled to move toward the unification of Taiwan with mainland China. This will not necessarily denote a Chinese military invasion, though inadvertent clashes are a risk. It is more likely that China will implement a Sun Tzu-type, frog-in-boiling-water strategy and squeeze Taiwan’s economy, putting the onus on the United States to escalate. Any U.S. military intervention would trigger an outright conflict between the world’s two superpowers.