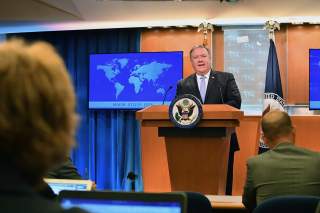 Mike Pompeo’s first formal speech as Secretary of State can best be described a diplomatic body slam on the Iranian regime.

He not only declared the Iran Deal as dead as the Wicked Witch of the West. He laid out the follow-up U.S. strategy to deal with the regime’s nuclear ambitions and destabilizing actions in the region.

It’s true that the speech included a long list of complaints about the deal and Iranian behavior that we have heard from Trump before. But Pompeo put three new elements of U.S. policy on the table.

In addition to talking about sanctions, Pompeo signaled a number of other initiatives the United States will undertake, from counter-proliferation measures to going after surrogates. This is different and more ambitious than the “maximum pressure” strategy the United States imposed against the DPRK regime.

The strategy the United States imposed against North Korea is primarily designed to protect America and its allies against a nuclear threat with a combination of missile defense, nuclear deterrence, conventional deterrence and sanctioning. The strategy for Iran is a “counter-punch” strategy that looks to knock the pins out from under the elements of Iranian power.

It’s more than just isolation. It’s more like whittling down to size.

What makes this scary for the Iranian regime is that there is every prospect the United States can pull this off. There is plenty of punch in the counter-punch strategy.

Certainly, the United States can gut Tehran’s access to Western cash. Europeans can chatter all they want about preserving the deal. The truth is, European and American companies are already bailing. And the Iranian economy looks to be in virtual free-fall.

In public, European officials may continue to bash the president, appeasing Trump-haters over there and over here. In private, they know Iran is a problem for them too, and they have little option but to work with the United States. In the Middle East, countries are lining up to join the anti-Tehran cause.

The regime is also over-stretched with dwindling cash reserves. Meanwhile, the U.S. military is getting stronger with a new infusion of cash, while the administration has stabilized its overseas commitments. As long as it keeps doing about the same with more and more ready resources, Iran’s position in the region gets worse, not better.

To cap it all off, Iran doesn’t have much more gas to throw on the fire. Nor are China and Russia likely to be much more help than they have already been—which is far from enough to take the pressure off Tehran.

Diplomacy is Back on the Table.

Unfortunately for Iran, the U.S. strategy is not all muscle and no brain. Diplomacy has a crucial role in the news strategy. Trump has been insisting that, in every competition he’s in, he always offers the other side an off-ramp. But getting on the off-ramp comes at steep price.

That’s why Pompeo said that if we do a deal, it’s going to be real deal—a treaty. That’s news. That has not been a policy before. It’s news not only for Tehran, but also for Pyongyang. After all, after saying a treaty is good for a real deal with Iran, it is inconceivable that the United States will do a deal with North Korea based on a handshake.

The prospects for serious diplomacy are a serious challenge to a regime that his deeply fragmented over what to do next. The factions within the national leadership don’t agree on where to go from here. The odds of Iran coming up with a diplomatic strategy of its own are about as likely as the comeback of disco.

No Regime Change, Thank You Very Much.

Given that, the regime is already feeling a lot of internal unrest that puts the powers that be in a very difficult place. Authoritarian regimes are great internal repression. They are also good at focusing the state’s efforts on external enemies. They are not very good at doing both at the same time. Faced with unrest at home and pressure from abroad, the regime faces the worst of all possible situations.

While the changes announced by Pompeo mean big problems for Tehran, don’t expect the regime to be meeting the secretary’s one dozen demands any time soon. What is more likely is that as the regime feels the pressure of being overstretched, it will dial back its aggressive foreign policy.

Furthermore, it will likely put its nuclear program on hiatus. The best course of action would simply be wait Trump out. Maybe Mueller will get him. Maybe Trump will get distracted by another shiny foreign-policy object. Maybe he won’t get re-elected. The smart Iranian play would be to play it smart.

If, on the other hand, Iran doubles down on aggression, the regime risks making its conditions worse—like a wild animal struggling in quicksand, it would only sink faster. More bad behavior will only accelerate how quickly others will work with the United States against the Iranian regime.

From Trump’s perspective, a quiet Iran that is not accelerating its pursuit of the bomb and not destabilizing the Middle East is good enough. That’s a deal the United States might tacitly accept.

Who knows—maybe someday, acting in its own best interests, Iran will want to take Pompeo’s New Deal. Then somebody really will deserve a Nobel Prize.