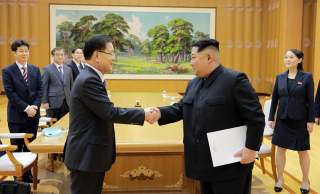 The Washington foreign-policy community’s reactions to President Trump’s decision to meet with North Korean leader Kim Jong-un have been a mix of surprise and criticism. While the surprise is certainly justified, it’s time to offer credible and practical ideas for him and his team rather than bromides of conventional wisdom. The old rule book has gone out the window, for better or worse. We have no other option but to give the process a chance and be part of the solution.

While we may never truly understand what motivates Kim Jong-un, it is clear that “maximum pressure”—more a continuation of President Obama’s strategy with a new name—is working. The Trump administration deserves credit for continuing to build pressure on North Korea, and especially for gaining China’s cooperation. Now is the time to test the proposition and determine if a bold, “all-in” diplomatic overture can work.

In many ways, the potential for military action with North Korea, whether intentional or inadvertent, has increased during the Trump presidency. The facts are clear: North Korea is quickly modernizing its nuclear and intercontinental ballistic missile capabilities. The CIA’s director has stated publicly that North Korea will be able to strike the United States with nuclear weapons within a “handful of months.” In addition, North Korea’s constant saber rattling, proliferation of chemical and other military equipment to regimes like Syria, state-sponsored cyberattacks, and role in destabilizing the northeast Asian security and economic landscape are unacceptable.

As a result, the surprise announcement that President Trump will meet Kim Jong-un before May shocked Washington’s foreign-policy “establishment.” While the Trump administration has never elucidated a clear formula for how to actually position the United States effectively for a dialogue with North Korea, he has consistently emphasized the horrible nature of Kim’s regime. Recall that Trump spent a great deal of time during his State of the Union address criticizing the regime’s depravity, so much that Vice President Mike Pence could not bring himself to stand when the inter-Korean team entered the opening ceremonies of the Pyeongchang Olympics. The Trump administration put North Korea back on the list of state sponsors of terror, and North Korea continues to hold three Americans in captivity. All this makes Trump’s decision to meet with Kim that much more bold and shocking.

As many have noted, North Korea is a “land of lousy options,” but the only viable one is diplomacy. For the naysayers who want to draw a political line in the sand against such an overture, they are overlooking the urgency of the matter, or are overly wedded to historic antecedents that have resulted in failure and manipulation of the United States and its allies.

We’re in uncharted territory; what we need is pragmatic thinking about what to do when the president actually sits down with North Korea’s leader.

The Trump-Kim summit should focus on establishing a common foundation for diplomacy. By coming to a shared vision for a way ahead, the two leaders have an opportunity to find a breakthrough that has stymied diplomatic efforts for decades. Yet the current outreach should certainly be grounded in realistic assumptions about what is possible, and the implications of failure.

As part of this effort, the administration should approach this summit with a commitment to a set of principles that will help preserve the security of the United States, and alleviate anxiety and uncertainty in Tokyo and Seoul. The following Six Nos should be the foundational U.S. preconditions that guide Washington’s diplomatic approach:

• No comprehensive sanctions relief without the complete and verified disclosure of all nuclear, chemical, biological, cyber and missile facilities in North Korea;

• No short-term financial assistance without the release of all U.S. prisoners from North Korean custody and the verified closure of North Korean labor and prison camps and other state-backed organs of repression;

• No normalization or peace treaty without the complete, irreversible and verified abandonment of all nuclear weapons and existing nuclear programs by North Korea, and their successful return to the Treaty on the Nonproliferation of Nuclear Weapons and to IAEA safeguards;

• No agreements without prior consultation with U.S. allies in Seoul and Tokyo;

• No dissolution of the U.S.–South Korea alliance or removal of U.S. military forces from the Korean Peninsula; and

• No open-ended diplomatic process that would create conditions for North Korea to continue to develop their nuclear and ballistic-missile programs, or that undermine U.S. and South Korean operational readiness.

Asia policy—unlike that concerning the Middle East—has enjoyed broad and long-standing bipartisan support. The Washington foreign-policy community has the opportunity to recognize that the situation is dire, that conventional wisdom has not solved the problem, and that it has an opportunity to help the Trump administration advance a deliberate and reasoned path for diplomacy while showing the American people that national interest comes before any other consideration. The risks are too great. President Trump has already said that if diplomatic efforts fail, “Phase 2” will occur. Developing a diplomatic process is our best bet.