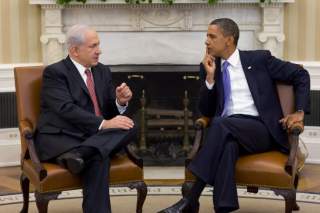 Strong indications that the Obama administration may seek UN Security Council (UNSC) backing for a U.S. resolution outlining the terms of a final Middle East peace settlement has rightfully been described as an “earthquake” and potential game-changer. The resolution, reportedly drafted last year by Secretary of State John Kerry and his Middle East negotiating team, would break with a nearly half century old U.S. policy that the terms of a final peace agreement must come out of direct negotiations between Israelis and Palestinians, and not be imposed from the outside. And for nearly half a century U.S. attempts to prod each side to reach such a negotiated settlement have failed.

An “Obama framework” for a Middle East peace settlement—building no doubt on the 2000 “Clinton parameters” and the 1960s era UN Resolution 242—would prove useful for a number of reasons. It would concede the wisdom of Albert Einstein’s adage that to do the same thing over and over again expecting a different outcome is the definition of madness. Such a resolution would also show that there was a strategy and purpose behind the Obama administration’s very public pique towards Israeli leader Benjamin Netanyahu. Most importantly, such a resolution would mean dropping the pretense, once and for all, that Netanyahu actually supports the U.S.-led “peace process,” a pretense which the Israeli leader has feigned for many years as a way to strangle a viable two-state solution in its cradle.

“This mask that Netanyahu wore pretending to support a ‘peace process’ while continuing to create new ‘facts on the ground’ with settlements was very useful, and it served his purposes well for a very long time,” said Daniel Levy, an Israeli political scientist and former adviser to Israeli Prime Minister Ehud Barak, and currently a director at the European Council on Foreign Relations. But the demands of a close election and pressure from an administration focused on settlements forced Netanyahu to dispense with the pretense. “Now that he is unmasked I think it will be much harder, if not impossible, for Netanyahu to keep governing by playing games with the international community while simultaneously winking at the settlers. That’s a good thing: I call this ‘new’ Netanyahu a gateway drug to an honest conversation about Israel.”

The manner of Netanyahu’s unmasking is worth recalling, because it explains why there is probably no going back to the old diplomatic pretense for the Obama administration. Even by the standards of Israel’s rough-and-tumble coalition politics, the recent campaign run by Netanyahu was unprecedented in its brazenness. Just weeks before the election, Netanyahu trampled diplomatic protocol by going behind the White House’s back to deliver an address to Congress designed to torpedo U.S.-led negotiations over Iran’s nuclear program. Netanyahu insisted he deeply regretted that some observers had perceived his calculated dissing of the White House as “political.”

“That was never my intention,” Netanyahu assured his audience, and then returned to Israel and included video of his Congressional appearance in television commercials aired in the waning days of his campaign. When his American adventure failed to move polls sufficiently, Netanyahu appeared on the Sunday before the election at a right-wing rally of settlers and their supporters committed to colonizing the West Bank, on which any Palestinian state must be built. After that failed to sufficiently tip the balance in polling, Netanyahu the next day dispensed with the pretense altogether, stating explicitly what his entire career had signaled implicitly: if he was returned to office Netanyahu would never allow for the establishment of a Palestinian state.

Remarkably, Netanyahu continued to dispense with the gauzy rhetoric that had long veiled his true worldview. Even as Israelis were heading to the voting booth, he alerted supporters on his Facebook page that the “Arabs are flocking in droves to the polling stations,” playing the race card in a desperate attempt to remain in office.

To the existential question of whether Israel would reach a two-state deal and remain a Jewish democracy, or fail to do so and inevitably jettison either its Jewishness or its democracy, Netanyahu had at last given a straight answer: Israel would remain an occupier in perpetuity, the rapidly growing population of Palestinians under Israeli dominion relegated to second-class citizenship, and Israel’s democratic culture and international standing sacrificed to the voracious appetite for land of the Israeli settler movement.

“Even in the midst of a heated campaign words matter, and when the Israeli Prime Minister rejects the two-state solution, it means he rejects the fundamental principle of ‘land for peace’ that has been the touchstone for U.S. diplomacy and United Nations resolutions since 1967,” said Edward Djerejian, former U.S. ambassador to Israel and the director of Rice University’s Baker Institute for Public Policy.

Even in trying to walk back the rejection as referring only to current conditions, Djerejian noted, Netanyahu attached qualifiers and conditions that would de facto foreclose the possibility of a two-state solution. “That’s a fundamental policy difference that no U.S. administration can afford to take lightly, so I think the White House is right to take Netanyahu at his word and refuse to sweep these issues under the rug, and to look for other options such as using the United Nations to keep hope for a two-state solution alive,” said Djerejian. “Because in my long experience with Middle East diplomacy, when hope for progress dies, violence and bloodshed inevitably follow.”

The parameters of an “Obama framework” for Mideast peace would likely follow a well-known script: a Palestinian state on the West Bank and Gaza, based roughly on Israel’s pre-1967 borders with land swaps to allow Israel to incorporate several major settler blocks; Jerusalem as the capital of both states, with majority Arab East Jerusalem serving as the Palestinian capital; language fudging a very limited “right of return” to Israel for Palestinian refugees; security guarantees for Israel that would amount to a largely demilitarized Palestinian state.

The actual outline of a U.S. resolution is probably less important, however, than the furious debate it will inevitably provoke. At some point America’s essential role as peacemaker was always going to require that U.S. officials told publics on both sides of the conflict some unpopular truths. White House Chief of Staff Denis McDonough made a good start last week while addressing a conference in Washington hosted by J Street, a progressive Jewish organization. The Obama administration “cannot simply pretend that [Netanyahu’s] comments were never made, or that they don’t raise questions about the Prime Minister’s commitment to achieving peace through direct negotiations,” said McDonough, who went on to note: “Israel cannot maintain military control of another people indefinitely. An occupation that has lasted for almost 50 years must end.” The line bought a standing ovation by the thousands of attendees.

Aaron David Miller is a former Middle East negotiator and adviser to both Republican and Democratic Secretaries of State going back two decades. “There has been real anger towards Netanyahu building in the Obama administration for five or six years, and combined with fury over his recent intervention on Iran negotiations and frustration about his re-election, I think that has led administration officials to finally utter the ‘R’ word, for ‘reassessing’ U.S.-Israeli relations. That has only been done at a handful of low points in the relationship going back to the 1970s,” said Miller, currently a Distinguished Scholar at the Wilson Center in Washington. “Given Netanyahu long history, his rejection of a two-state solution cannot have come as any great shock, but now that he’s stripped away any illusion that he ever really supported the idea, I think the Obama administration is going to take Netanyahu at his word and look to the United Nations to try and keep the hope of a two-state peace alive.”

James Kitfield a senior fellow at the Center for the Study of the Presidency & Congress and a Defense One contributor. He is a former senior correspondent for National Journal and has written on defense, national security and foreign policy issues from Washington, D.C.for more than two decades. You can follow him on Twitter: @JamesKitfield