Toward an Arab League That Serves Arab Peoples 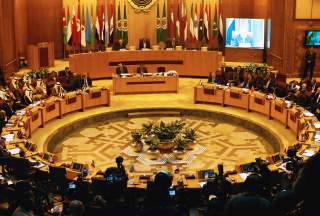 Senior delegates from twenty-one Arab countries have convened in the Saudi city of Dhahran for the twenty-ninth annual summit of the Arab League. The ongoing standoff between Qatar and most of its Gulf neighbors has been tabled, enabling Qatari representatives to cross their sealed border into the kingdom and Gulf Twitterers to express their hopes for a new unity. (The ruler of the country, Sheikh Tamim bin Hamad Al Thani, has nonetheless declined to attend.) Alas, “unity” in Arab League politics has traditionally proved little more than the false unity of militarism: Corrupt autocrats, on behalf of fractured societies, came together to rally against Israel. This year’s summit, by outward appearances, looks true to form: Even as states fail and tens of millions suffer from internecine conflict from Libya to Syria to Yemen, the Palestinian issue has been designated as the summit’s top agenda item. There are hopes, to be sure, that just underneath the pro forma fixation on Israel will lie actual substance—such as a new pact to push back on Iran’s Arab proxies, and perhaps even a new push for a negotiated settlement to the Palestinian-Israeli dispute.

But absent from the agenda altogether are the cultural, economic, and micro-political problems that underlie all of these grand conflicts: the prevalence of nepotism and corruption; the poverty of Arab education systems; the deterioration of civil and state institutions; and the normalization of mob violence. Arabs have been open to overtures from extremist ideologues, in part, because they lacked a stake or a say in the system that dominated their lives. Arabs have been vulnerable to manipulation by hostile actors, in part, because as children at school, they were denied the critical thinking skills necessary to refute a logical fallacy. Arabs have rallied around agendas of destruction, in part, because those who would construct civil institutions were denied the resources or the mandate to do so. For decades, this tragic predicament afflicting Arab majorities has been acceptable to Arab elites: They profited from the nepotism that reigned. They maintained their privilege thanks to disorder among the poor and disenfranchised. But now, in much of the region, elites too are imperiled by the prospect that the fires of internecine conflict will finally reach their doorstep. They recognize that Arab statecraft as traditionally practiced is no longer tenable.

The question that ought to be facing any gathering of Arab leaders is, what role should such a gathering play in promoting reform?

The good news is that among young people in the region, there is an instinctive grasp of the need for reform-minded leadership. In the past, public figures who attained hero status tended to do so through demagoguery. But a glance at the Arab region today shows that Arab leaders who enjoy the greatest support at home tend to be those, middle aged and younger, who embrace the mantle of reform. There is thirty-two year old Saudi crown prince Mohammed bin Salman, who has won widespread enthusiasm among his overwhelmingly youthful population for the progressive social and economic reforms he has instituted over the past two years. (He has also achieved unprecedented support in the United States, where his recent three-week tour of both coasts and places in between yielded new Saudi-American partnerships in business, entertainment, and technology, in addition to foreign and military affairs.) There is fifty-seven year old Emirati Crown Prince Mohammed bin Zayed, who is overseeing a transformation of his country to a “knowledge-based society” while promoting liberal egalitarian values across the Arab world through smart competitive soft power. And there is fifty-six year old Moroccan King Mohammed VI, who has advanced civil society and sociopolitical reform at home, as well as taken Morocco’s message of Islamic tolerance to the the broader Maghreb, the Sahel and beyond.

When the gamut of Arab leaders convene, they can better contribute to their subjects’ well being by comparing and sharing best practices, establishing new multilateral development projects, and promoting a broader regional culture of conciliation and tolerance. Not only has no Arab League summit adopted such a focus; the institution is itself a step behind many of its member states. Consider, for example, that the Arab League has more employees than Twitter followers and has yet to put out its first Tweet. Its bureaucracy, divided into nine “sections,” includes a “Section for Palestine and Occupied Arab Lands” but not a section for education—whether for Palestinians or anyone else. Before it can serve to encourage reform in the region, it will need to reform itself.

Perhaps this week in Saudi Arabia, where remarkable reforms are underway, the Arab League might finally begin to take stock of its legacy and chart a new and better course.

Ahmed Charai is a publisher. He sits on the Board of Directors of The Atlantic Council in Washington and International Councilors at The Center for Strategic and International Studies. He's also Board of Trustees of the The Foreign Policy Research Institute in Philadelphia and member of the National Interest’s Advisory Council and member of the Advisory Council of the Gatestone Institute in New York.