Is TPP Dead without America? 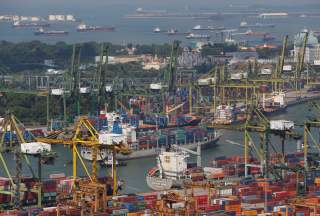 Staring at some still-born, historical arrangements like the Asian Monetary Fund, the Free Trade Area of the Americas and Transatlantic Free Trade Area, one would marvel at the pertinacity of the deal itself and the perseverance of policy makers this time to press on with trade integration despite growing sentiments in many participating economies that call on government to “protect” rather than to “liberalize.”

Geoeconomics of the CPTPP

Economic success in today’s competitive environment requires countries to proactively reduce trade barriers and win over mobile international capital that flows to freer and more secure markets. But the interlocking nature of modern economic relations and domestic oppositions to unilateral trade disarmament often render that national interests are best served through coordinated and reciprocal regional efforts. The CPTPP is such a mega-scale free trade agreement (FTA) that aims to leverage the collective economic potential of more than eleven countries around the Pacific Rim, whose trade totaled about $350 billion in 2016.

Our updated simulations using the multiregion, multisector GTAP model suggest that a deal without the United States in it would raise the combined real gross domestic product (GDP) of the eleven countries by about 0.7 percent in the long run. More importantly, as a “natural trading bloc” with intra-FTA trade share exceeding the groupings total share of the world’s GDP, the CPTPP’s trade diverting effects are not as alarming as some have feared. The net global welfare amounts to approximately $57 billion according to our analysis.

With respect to content, suspension of some twenty provisions inserted only at the demand of the United States (e.g. extended protection for biologics) and addition of revised articles on withdrawal, accession and review procedures notwithstanding, the reworked CPTPP preserves all the core elements of the TPP-12. It remains a high standard regional trade liberalization blueprint that set regionally acceptable standards and write enforceable trade rules in emerging policy areas, such as digital economy, public procurement, competition and regulatory coherence, in a forward-looking manner.

Country-specific benefits of the CPTPP, too, are worth highlighting. For instance, the value of the deal as an insurance policy against any potential breakdown of the North American Free Trade Agreement (NAFTA) renegotiation are increasingly picked up on by Canadian and Mexican leaderships. Japanese and Vietnamese liberal reformers would stay relieved that the prize of locking in difficult domestic structural reforms, whether it is in agriculture or state-owned enterprises, is still within grasp. Above all, the withdrawal of the United States seems to have made the CPTPP a more equitable grouping wherein partners, instead of dictating the terms, show more sensitivity to each other’s concerns and interests.

Denouncing the TPP as a job killer, Donald Trump pulled his country out of the deal three days into his administration, invoking economic reasons. Trump’s newly announced Asia strategy enshrining a “free and open Indo-Pacific region,” however, makes the scrapping of the TPP more emblematic of his firm departure from the Obama administration’s “Pivot to Asia,” that defined Asia more narrowly as “Asia-Pacific.”

Ostensibly, the catchphrase is a political shorthand to reflect India’s rising role in Asian and global affairs and tightening U.S.-India bilateral ties since Narendra Modi took office in 2014. Rhetoric aside, it is clear that the new strategy, in so many aspects, shares the pivot’s fundamental goal of dealing with the swelling influence of China. Through outlining a single geoeconomic and geopolitical space bookended by the United States and India, Washington stretches the boundary of the region, and therefore economic center of gravity, westwards. In effect, this dilutes China’s overwhelming economic dominance.

Trump wants to promote trade and prosperity in the Indo-Pacific theater and this will require multilateral infrastructure financing for roads and ports. After all, it is no coincidence that key players in Trump’s Indo-Pacific vision—Japan, Australia, India, and to a lesser extent South Korea and Thailand—are those who are either sidelined by or unsympathetic to China’s massive Belt and Road Initiative.

Apart from the TPP, the twenty-one-member Asia-Pacific Economic Cooperation (APEC) is certainly another institution that does not fit well with Trump’s “Indo-Pacific Dream.” The most noticeable difference between Asia-Pacific, a community from which APEC draws strength, and Indo-Pacific is that India is excluded from the former but not from the latter. Although nonincorporation of Asia’s third largest economy in APEC was famously compared to “enacting Hamlet without the Prince of Denmark,” New Delhi’s twenty-year quest for APEC membership still bears no fruit. Even when the extended moratorium on APEC membership expired in 2010, India’s bid was met with fierce oppositions from a host of prominent personnel, including APEC’s intellectual architect Fred Bergsten, who argued against recognizing India as a Pacific nation.

While Trump’s recast of the region as “Indo-Pacific” seemingly solves India’s identity dilemma and paves the way for its long-awaited accession, it could paradoxically reduce the incentive for India to join the APEC grouping. If, for instance, New Delhi is emboldened by Trump’s new strategic thinking, it could “plot” to replace the fading Asia-Pacific organization with an Indo-Pacific equivalent where India and America take the center stage.

That being said, perhaps it is Trump’s “allergy” to multiparty trade cooperation and affection for bilateralism with “many strings attached” that could strike a heavy blow to the institution that is already hollowed out by its inability to push through voluntary and nondiscriminatory trade liberalization. So long as Trump continues to double down on APEC as a loose assemblage and not as a communal forum to advance common purposes and orderly economic integration, the chances for APEC to live up to its mission of building “a dynamic and harmonious Asia-Pacific community” are extremely slim.

Ji Xianbai is a PhD candidate at S. Rajaratnam School of International Studies, Nanyang Technological University, Singapore. He holds the Nanyang President’s Graduate Scholarship and is also an Associate Fellow of European Union Centre in Singapore.